Allure of the Seas sailings from Galveston now available to book

In:
Allure of the Seas Galveston

Just a week after Royal Caribbean announced it would homeport its first Oasis Class ship from the port of Galveston, guests can now begin booking Allure of the Seas sailings in 2021.

The newly released sailings are available to book immediately.

Prior to Allure of the Seas' arrival in Galveston, she will undergo a major renovation in summer 2020, that will add a variety of new upgrades and enhancements.

Meanwhile, Galveston is constructing a brand new $100 million state-of-the-art cruise terminal to perfectly accommodate Allure of the Seas. The facility will feature mobile check-in and facial recognition to expedite guest arrival. The terminal will be designed and developed sustainably to meet LEED (Leadership in Energy and Environmental) certification standards.

Royal Caribbean will homeport Oasis Class ship from Galveston in 2021

In:
Allure of the Seas Galveston

Royal Caribbean announced it will send the first Oasis Class ship to be home ported from Galveston, Texas in 2021.

In conjunction with the cruise line's announcement it has signed a long-term agreement to build a brand new state-of-the-art cruise terminal in Galveston, Allure of the Seas will sail from Galveston beginning in 2021.

Allure will sail 7-night Caribbean itineraries from Galveston and will be the biggest and boldest ship sailing from the Lone Star state. It appears the first sailing will be November 10, 2021.

“We are excited to partner with the Port of Galveston to develop a world-class facility which will allow us to sail our newest, largest and most innovative ships from Texas starting with Allure of the Seas, one of the largest ships in the world,” Michael Bayley, president and CEO, Royal Caribbean International. “The new terminal will allow us to increase our guests to the region by 50% generating a $100 million economic impact within the first year of operation.”

In November 2021, the newly completed terminal will welcome one of the largest cruise ships in the world, Allure of the Seas.

Allure of the Seas is scheduled to under go a $165 Royal Amplification in summer 2020, that will add a variety of new amenities, activities and things to do onboard.

Among the many changes, Allure will receive the Ultimate Abyss, the tallest slide at sea that touts a 10-story plunge; The Perfect Storm, a thrilling trio of multistory waterslides; and an array of culinary possibilities with more restaurants, including the introduction of Giovanni’s Italian Kitchen & Wine Bar and returning favorites Playmakers Sports Bar & Arcade and El Loco Fresh; and more.

The Houston Chronicle reports the agreement was approved by the Port of Galveston's board on Wednesday, and will result in Royal Caribbean investing around $100 million to construct the 150,000-square-foot Terminal 3, which is slated to open in November 2021.

The new cruise terminal will be big enough to handle Royal Caribbean's largest cruise ships, including an Oasis Class ship or the new Icon Class ships slated to debut in 2022.

Royal Caribbean has strongly hinted at the possibility of an Oasis Class ship coming to Galveston over the last year. Moreover, Royal Caribbean's schedule for its Oasis Class ships is released through early 2022, with the exception of Allure of the Seas. Allure has no scheduled sailings currently available to book beyond November 2021.

Terminal 3 will be built on 10 acres of land at Pier 10, and will be used by Royal Caribbean, which will lease the terminal land for 20 years. The cruise line will then have the option of extending that lease for an additional 10 years, up to four times.

While some preliminary work has already begun on the terminal, construction of the terminal will begin in April 2020.

The port will be responsible for items including maintenance, a new surface parking lot, and improvements to the dock to accommodate the larger vessels. Royal Caribbean will help with the cost of improving the docks.

Royal Caribbean's new cruise terminal that it is building at the Port of Galveston will include facial recognition technology that is aimed at speeding up the process of getting guests in and out of the terminal.

At a meeting of the Port Directors for the Port of Galveston in December 2018, it was mentioned that Royal Caribbean's new cruise terminal will feature facial recognition technology.

"If you see what many made remarks made about Galveston, it is the traffic coming in, and then it is waiting in line to go through terminals... With the new cruise terminal that Royal Caribbean is building, it will be facial recognition software there so when you come into that terminal, you are going to have software recognition. The computers will see your face and recognize who you are, and they are going to know you are a paid customer on the cruise line, and then they are going to shuttle you right on through. And I think Michael Bayley said it was an hour less."

Royal Caribbean and the Port of Galveston have entered into a Memorandum of Understanding (MOU) for the development and operation of a new cruise terminal. The new state-of-the-art facility is anticipated to open in Fall 2021.

Royal Caribbean and the Port of Galveston announced they have entered into a Memorandum of Understanding (MOU) for the development and operation of a new cruise terminal. 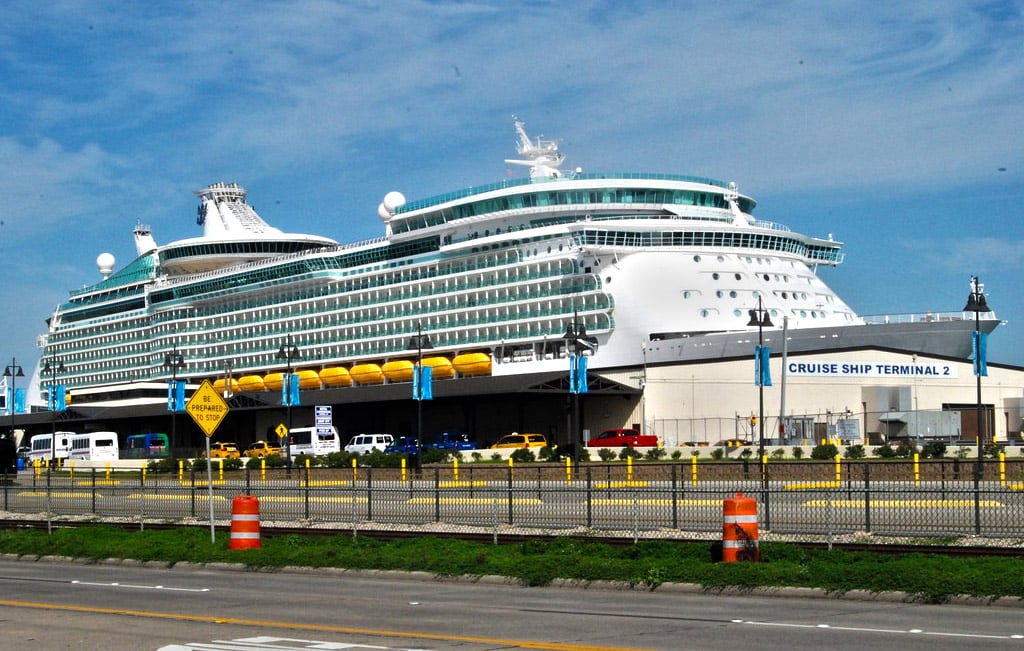 The new terminal will cover approximately 200,000 square feet on ten acres of land in the southeast section of the Port known as Pier 10. Improvements to the pier bulkhead and apron will be made to safely accommodate the cruise line’s largest vessels. In addition, a staging and loading area, bus and taxi staging areas and substantial parking will be constructed. The new state-of-the-art facility is anticipated to open in Fall 2021.

“Over the last 15 years, Royal Caribbean has brought over 2.4 million guests to Galveston driving an economic impact of $65 million each year. The development of a new terminal is crucial to our continued growth and expansion of the brand in the region,” said Michael Bayley, President and CEO, Royal Caribbean International. “We look forward to continuing our outstanding relationship with the Port of Galveston and are excited about our plans for a state-of-the-art facility with a bold new design and technological advancements that will considerably enhance our guest experience.”

The long-term lease negotiations could lead to a 60-year transaction: a 20-year initial term and four 10-year options.

Port of Galveston reopens for return of Liberty of the Seas

In:
Hurricane Harvey Liberty of the Seas Galveston 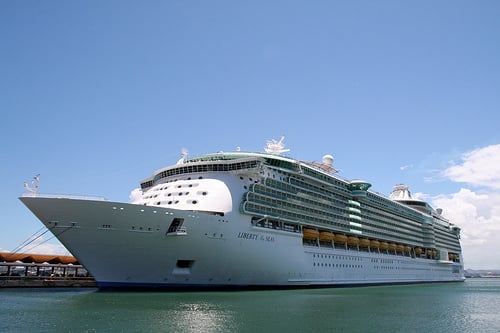 The re-opening of the port means cruise ships, like Royal Caribbean's Liberty of the Seas, are able to dock there once again following the devastation caused by Hurricane Harvey.

Royal Caribbean recommends those traveling to Liberty of the Seas review the latest information on road conditions at the Texas Department of Transportation’s website.

Royal Caribbean's Chief Meteorologist, James Van Fleet is onboard Liberty of the Seas and will continue to monitor the situation in the Galveston/Houston area.

Royal Caribbean has a phone number open for guests that have questions about their upcoming Liberty of the Seas sailing, or if you are coping with significant storm impacts that affect your ability to get away for your cruise. The phone number is 1-800-256-6649.

Uber and Lyft return to Houston and Galveston markets

There is good news for cruise passengers that are looking for more options to get to the Port of Galveston from nearby airports.  A new Texas law will allow ride sharing companies like Uber and Lyft to offer their services to the Houston market.

Uber and Lyft and the primary competitors in this space, and Lyft has already indicated it returned to Houston on May 31.  Uber has re-opened operations in Galveston on May 29.

Lyft made its return to Houston on May 31.

According to Galveston Cruise Tips, estimated fares for Uber and Lyft are $42-56 from Houston Hobby to the cruise port each way. The estimated cost is $73-96 for a ride from Bush Intercontinental to the Galveston port. It is important to remember the cost is per car, not per passenger.

Readers can sign up for Lyft and receive a free ride credit by using this special link.  Please note that we receive a small commission for new sign-ups from links on this website.

In:
Vision of the Seas Galveston

Royal Caribbean has added even more Vision of the Seas sailings from Galveston, Texas, with guests now able to book sailings through April 2018. Royal Caribbean announced initial Vision of the Seas sailings for November and December 2017, but has now expanded those offerings to extend through April 2018.

Vision of the Seas will offer 4- and 5-night itineraries to destinations in the Western Caribbean, such as Costa Maya and Cozumel.

Vision of the Seas is the second Royal Caribbean ship offering cruises from Galveston, joining Liberty of the Seas.

In:
Vision of the Seas Galveston

Royal Caribbean added some new Vision of the Seas sailings in 2017, from Galveston, Texas. The new sailings are available for booking now, and include 4- and 5-night cruises to destinations in Mexico.

Sailing dates begin on November 6, 2017 and extend through the end of December.

Renovatins to the Galveston cruise terminal are running behind schedule, which means by the time Royal Caribbean's Liberty of the Seas arrives in November, the terminal will still be under construction. The Houston Chronicle reports the terminal expansion was originally planned to be completed back in May, but construction roadblocks and an archeological dig for a 19th century Texas Navy ship have increased costs and delayed work.

The port of Galveston is working to add 92 feet to the 1,000-foot-long berth and build a new passenger check-in, luggage screening and waiting area.

Royal Caribbean struck a five-year deal with Galveston last year to bring a larger ship to the port on the condition that the port expand the terminal.  Liberty of the Seas will replace Navigator of the Seas, and bring with her, an extra 500 more passengers.

Port Director Michael Mierzwa said, "We're incurring some additional expenses, but it's not Royal Caribbean's fault, it's our fault."

In the interim, the port's board of trustrees approved a plan to add an air-conditioned tent, portable restrooms and additional seating - until the second building is complete.