As part of the festivities surrounding the new upgrades to Royal Caribbean's Independence of the Seas, the cruise line gave away a special edition of the classic board game Monopoly themed to Royal Caribbean International. 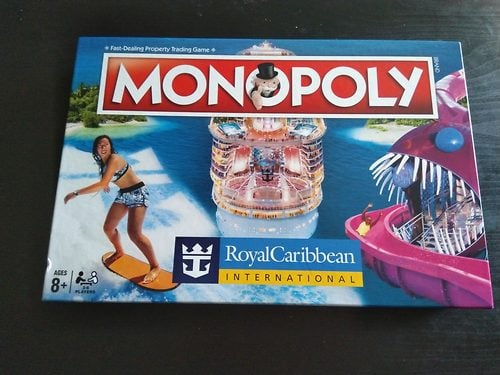 Before you ask, no, this is not for sale to the public yet.  From what we understand, this edition of the game was given away to travel agents on Independence of the Seas as a gift, but we have not seen nor heard of it being for sale to the public.  We purchased our copy off eBay, so you can take your chances there. 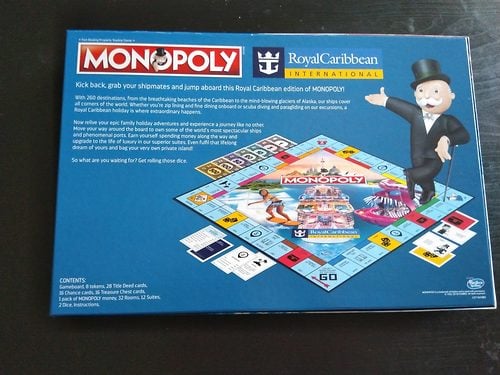 Monopoly has many different variations that have been produced over the years, including editions based on Star Wars, Pokemon, Game of Thrones, Disney and so many more. 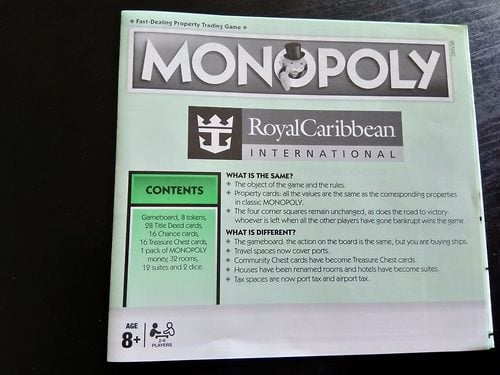 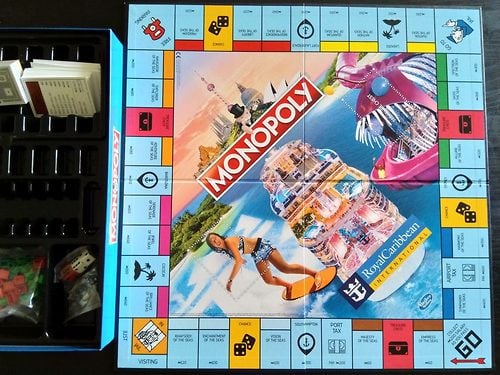 Like pretty much any Monopoly variation, the gameplay is the same but the aesthetics have changed. 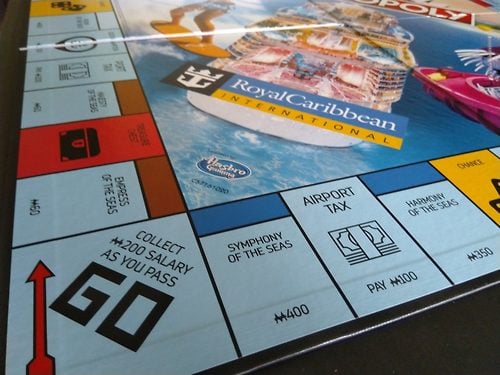 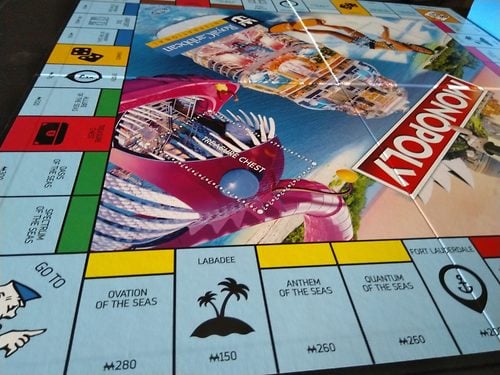 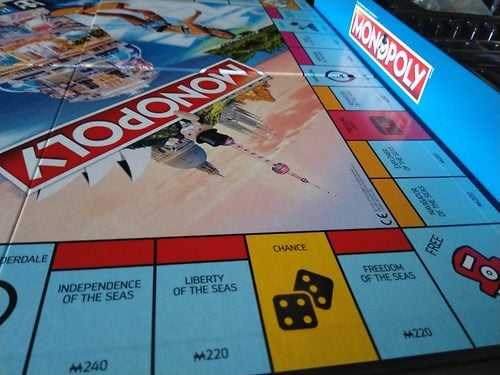 I thought it was particularly neat that the Treasure Chest cards (also known as Community Chest) were based on Royal Caribbean activities and events. 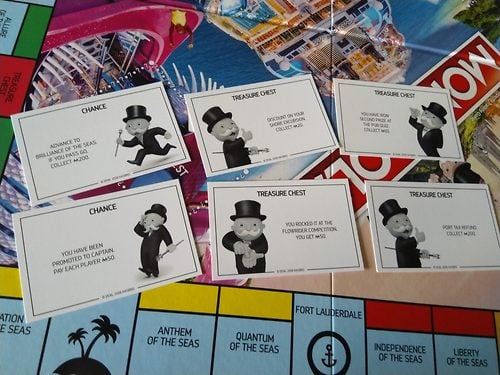 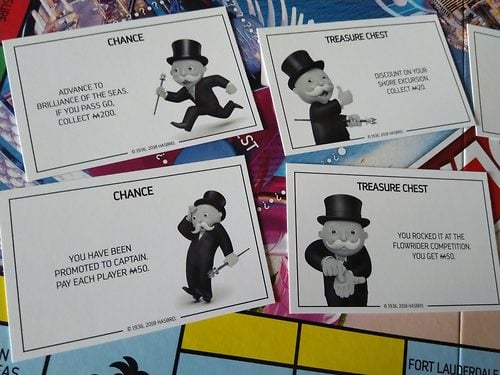 Here is hoping this Monopoly variation will eventually make it to become publicly available, because it is a really neat and fun idea!

In:
Souvenirs Harmony of the Seas

Last year, we ran across Royal Caribbean selling drink floaties onboard its ships and the cruise line seems to have augmented its offerings with a new kind of drink floatie.  Yes, the one we have all been asking for... the swan drink floatie. 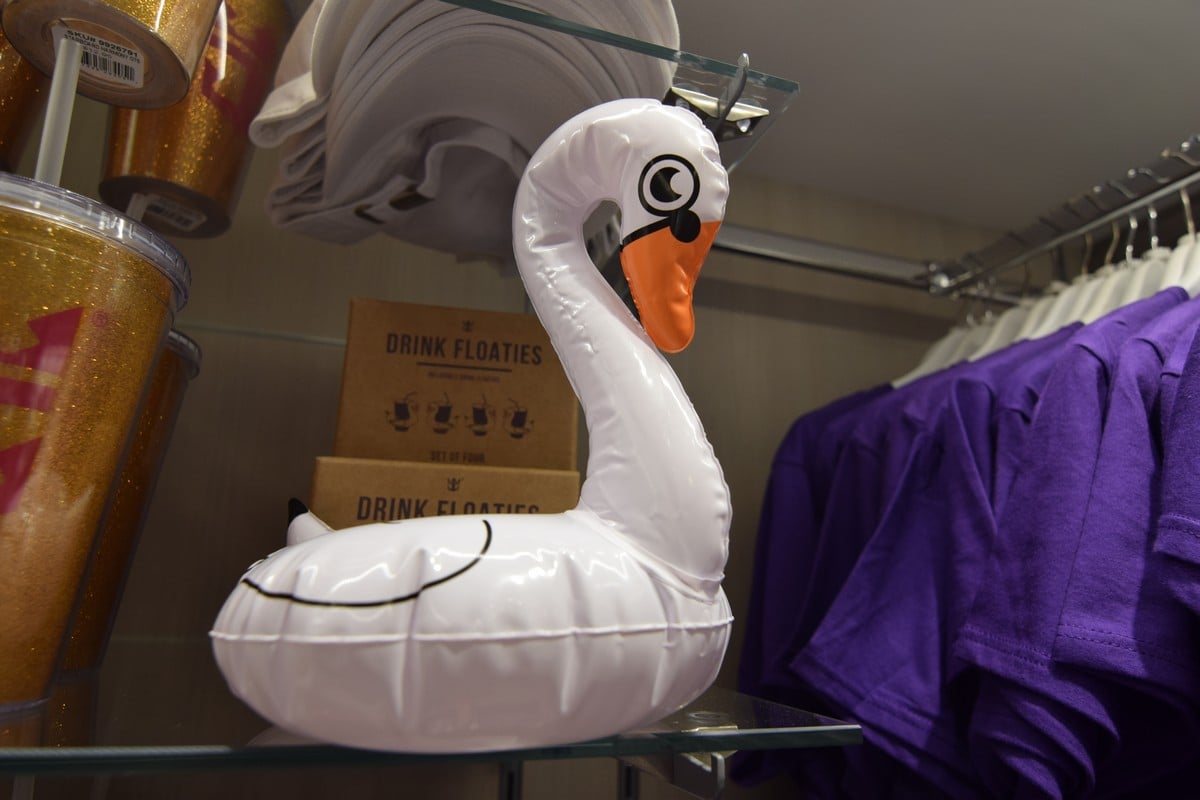 On Harmony of the Seas we spotted the swan floatie alongside the usual drink floatie assortment in the Boardwalk gift shop. 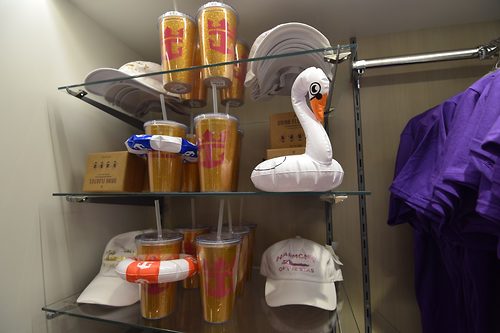 Just like the other drink floaties, the swan floatie is an inflatable life preserver for your drink that fit around most beverages or cups.

We are suckers for fun souvenir cups, and we spotted one that was new and cool! We saw these Viking Crown Lounge + Funnel souvenir drunk cup on Royal Caribbean's Navigator of the Seas, on the last day of the cruise when many cups were available to be purchased.  The cost was $3.95.

The cup is meant to look like the iconic Viking Crown Lounge that tops many Royal Caribbean ships, and you can fill it with your favorite beverage and then suck it down via the straw that comes from the ship's stack.  Very cool! Do you want to buy one of these cups? Do they look like a cool idea? Share your thoughts in the comments!

Just in time for the holidays, Royal Caribbean is offering guests who purchase an unlimited drink package new souvenir Coca-Cola cups that have a Christmas design to them.

Over the year, we have seen a number of cup designs that coincide with certain holidays and events, and this batch is ready for Christmas. The cups prominently feature Santa Claus on them, and say "Share a Coke this holiday".

Just in time for the 2016 Olympics in Rio, guests on Royal Caribbean can enjoy new souvenir Coca-Cola cups on their cruise. The new souvenir cups are available on Royal Caribbean ships when a guest purchases one of the unlimited drink packages.

It is not clear how long these will be available, but it seems to be a recent addition.

In:
Souvenirs Ovation of the Seas

Royal Caribbean is really getting into the celebratory mood with the launch of Ovation of the Seas, including a new beer bottle that celebrates the occasion too.

Karen Keeley shared with us this photo of a special Heineken bottle available to guests on Ovation of the Seas, that features a special look. The bottle is a fun souvenir for guests and it is not the first time Royal Caribbean has partnered with a company to create a souvenir bottle. There is a new design for the souvenir Coca-Cola cups guests get with their unlimited drink packages. The new souvenir cups are available on Royal Caribbean ships when a guest purchases one of the unlimited drink packages.

It is not clear yet when these new souvenir cup designs began being sold, but it is likely to have changed somewhat recently.

In:
Souvenirs Allure of the Seas

While we were on Royal Caribbean's Allure of the Seas, we were browsing the the Royal Caribbean gift shop and ran across quite possibly the cutest drink cozies ever. The "drink floaties" offer inflatible life preservers for your drink that fit around most beverages or cups.

The floaties come in a few different colors, including orange, green and yellow. If you are looking for a fun way to enjoy a cold beverage, you might consider this!

A 4-pack of drink floaties are available for $14.95 and were sold in the Allure of the Seas gift shop.

Will you be adding these floaties to your collection? Share with us in comments below!