Royal Caribbean to exit Dubai after 2013

In:
Serenade of the Seas Bahrain Middle East

According to the latest issue of Seatrade Cruise Review, Royal Caribbean will pull its ships out of Dubai following the 2013 cruise season.

Royal Caribbean regional director, Helen Beck, discussed the reason for the change, "We were initially very pleased with the business development there and expected continued growth; however, the demand has declined in recent seasons and as a result we have had to make some difficult decisions, driven by strategic and financial considerations, about discontinuing our program there."

Beck said that Serenade of the Seas, will remain in Dubai as scheduled for the 2013 winter season but operate an abbreviated season of 11 seven-night cruises out of Dubai to Fujairah, Abu Dhabi and Muscat starting January 28.

Royal Caribbean had initially announced 17 sailings; the upcoming Gulf season will be shortened because Serenade of the Seas is scheduled for revitalization in late 2012.

In:
Serenade of the Seas Dubai United Arab Emirates

Royal Caribbean has announced the arrival of Serenade of the Seas in Dubai for the winter season of 2012-2013.  Serenade of the Seas will offer passengers 17 itineraries, with departures every Monday for seven-night cruises in the UAE and Oman, from December 2012 to April 2013.

Serenade of the Seas replaced Brilliance of the Seas in the region and will offer guests new cruise experiences that explore the culture of the Middle East. You can choose a combination cruise and land tour  such as the "Arabian Explorer", which combines a guided tour of four nights on the mainland to seven nights cruise onboard Serenade of the Seas. The stages of the cruise-tours are Dubai, Al Ain and Ras Al Khaimah. With Royal Caribbean cruise-tour guests are escorted and accompanied by tour guides and all transfers included in the price, the transportation and hotel accommodation with breakfast.

The seven night cruise Serenade of the Seas also makes a stop in Fujairah and Abu Dhabi in the UAE, with overnight in Muscat, Oman, Dubai and, at the conclusion of the cruise.

Guests can also choose a 15-night cruise in the Mediterranean through the Suez Canal, departing January 14, 2013 from Malaga, Spain to Dubai, another alternative is the 15-night cruise from Barcelona to Dubai, April 15, 2013.

Each year, the Centers for Disease Control conducts surprise government health inspections to make certain that the cruise ships millions enjoy are safe and clean.  Royal Caribbean's Oasis of the Seas, Jewel of the Seas, Serenade of the Seas and Mariner of the Seas all scored a perfect 100 on their test this year.

The Vessel Sanitation Program is run by the CDC and unannounced inspections will occur twice per year in US ports, with a test that grades each ship on a 100 point scale.  The CDC evaluates cruise ships in 42 areas such as adherence to proper food handling, storage procedures, overall galley cleanliness and pool and spa cleanliness.

This is the third perfect score in a row for Oasis of the Seas while the other ships that scored perfectly have also had perfect scores in the past.

Only a small fraction of the dozens of cruise ships inspected each quarter receive a perfect score.  Most infractions are small in nature and are corrected quickly.

Serenade of the Seas coming to Abu Dhabi in 2013

In:
Ports Serenade of the Seas Middle East

Serenade of the Seas will make 17 stops in the UAE capital starting in January 2013.

Royal Caribbean Regional Director for Europe, Middle East and Africa, Helen Beck, commented on the news, "The resilience of the Middle East market is very encouraging. Bringing a new-look Serenade of the Seas to the region is testament to that belief. She will undergo a complete renovation and will boast a number of new food and beverage outlets and attractions that haven’t been seen here. It will certainly up the game for the regional industry."

Royal Caribbean has released their schedule of cruises to the Caribbean for 2013-2014 and are now open for bookings.

New to the schedule will be cruises out of New Orleans, Lousiana aboard Serenade of the Seas.  The first cruise out of the Big Easy will be a 9-night Caribbean cruise on December 12, 2013 that will stop at Key West, Nassau, Labadee & Ocho Rios.  Following that cruise, Serenade will alternate between 7-night cruises to the Bahamas and Western Caribbean.

It will be business as usual for Oasis and Allure of the seas.  They will continue their popular 7-night western and eastern Caribbean cruises out of Port Everglades, Florida.

Also calling Port Everglades home will be Independence of the Seas, who will offer 6-night cruises to the western and eastern Caribbean.

Freedom of the Seas will continue to operate out of Port Canaveral, Florida and alternate between 7-night eastern and western sailings.

Finally, Navigator of the Seas will debut in Galveston, Texas with two western Caribbean cruises.  Both are 7-night sailings and one itinerary calling at Falmouth, Grand Cayman, and Cozumel, while the other at Roatan (Honduras), Belize City (Belize) and Cozumel.

Royal Caribbean has outlined its plans for cruises to Europe in 2013 and it will include sending Liberty of the Seas, Navigator of the Seas and Serenade of the Seas, among other ships, to Europe for the season. Royal Caribbean calls for stopping in 30 ports and features 121 sailings over 25 itineraries.

One of the largest cruise fan websites, CruiseCritic, has released the results of the 2012 Cruisers' Choice Awards and Royal Caribbean has walked away with a number of prizes for its ships.

Among large cruise ships, Royal Caribbean was nominated in many categories and won the following categories:

Officials from the U.S. Virgin Islands in St Thomas report that a tourist bus carrying at least 13 cruise ship passengers has collided with a parked vehicle.  The passengers, from Royal Caribbean's Serenade of the Seas, collided with the parked car. 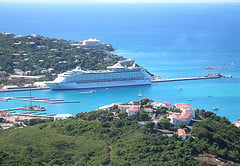 The accident occurred in an open-air "safari bus" on a steep road near the island's scenic Beacon Point.

St. Thomas Tourist Department spokeswoman Allegra Kean-Moorehead says one of the injured is a female passenger who had to be hospitalized with a hip fracture.  Twelve other passengers were released after being treated.

She also said that Serenade of the Seas is still expected to depart late Friday without the injured passenger.

In:
Serenade of the Seas Cruise Review

Lots of people are hesitant to try a cruise but Michael van Baker tried out a Caribbean cruise aboard Royal Caribbean's Serenade of the Seas out of Puerto Rico and decided to share his thoughts.

On why he's trying a cruise now, van Baker seems to finally have given into the idea, "The people I know just don’t go on cruises, unless they have an excuse: visiting relatives, hip destinations, all-you-can-drink offers. But when I was casting about for ways to beat Seattle’s December gloom, the prospect of a Caribbean cruise seemed worth considering."

Once onboard, van Baker was surprised by his room size, "The first surprise was the size of the stateroom–I had been on enough boats not to expect a majestic expanse, but the balcony stateroom managed to feel positively roomy."

van Baker did note that Serenade, which is going for a refurbishment in 2012, is showing her age, "The stateroom TV wasn’t a flat panel, but a tubed variety, sporting a distinctive green cast across the bottom third from years of use. (The projector in the ship’s cinema was also worn or in need of maintenance. There are parts of Thor I can’t describe to you because they were a muddy haze–which, of course, is both a plus and a minus.)"

You can read more of van Bakers thoughts on his full report.

Serenade of the Seas kicks off cruise season in St. Kitts

The 2011-2012 cruise season will kick off in St. Kitts with Royal Caribbean's Serenade of the Seas arriving on October 8th. 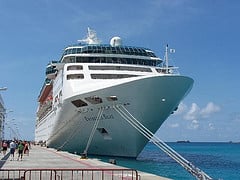 In addition, Port Zante will welcome Royal Caribbean's Explorer of the Seas six times as well as Navigator of the Seas and her 8 calls.