Royal Caribbean to exit Dubai after 2013

In:
Serenade of the Seas Bahrain Middle East

According to the latest issue of Seatrade Cruise Review, Royal Caribbean will pull its ships out of Dubai following the 2013 cruise season.

Royal Caribbean regional director, Helen Beck, discussed the reason for the change, "We were initially very pleased with the business development there and expected continued growth; however, the demand has declined in recent seasons and as a result we have had to make some difficult decisions, driven by strategic and financial considerations, about discontinuing our program there."

Beck said that Serenade of the Seas, will remain in Dubai as scheduled for the 2013 winter season but operate an abbreviated season of 11 seven-night cruises out of Dubai to Fujairah, Abu Dhabi and Muscat starting January 28.

Royal Caribbean had initially announced 17 sailings; the upcoming Gulf season will be shortened because Serenade of the Seas is scheduled for revitalization in late 2012.

Economic issues such as the European debt crisis and uncertainty regarding the global economic picture as a whole has the potential to affect demand for the cruise market in Dubai, and that's something Royal Caribbean is keeping an eye on.

Royal Caribbean regional director Helen Beck is among those worried that international economic issues could negatively impact demand for Royal Caribbean's product in Dubai.  It has already been hampered with the government issuing visas but other issues like the European economy, unrest in other parts of the Middle East have all had impact on Royal Caribbean's bottom line.

According to Beck, “We did not get the revenues we were looking for, as the global trading conditions have been quite tricky over the past 18 months.”

Khalid Bin Sulayem, the director-general of the Dubai Department of Tourism and Commerce Marketing, spoke about the cruise ship market today, "The global cruise ship industry has had its difficulties of late, but here it is a growing business and one where we feel Dubai can play a larger role within the region. While we have already established ourselves as a hub, we realise that there are a number of things that we must focus on in order to fully capitalise on this burgeoning sector by developing our cruise ship terminal infrastructure and improving coordination with neighbouring countries.”

Serenade of the Seas coming to Abu Dhabi in 2013

In:
Ports Serenade of the Seas Middle East

Serenade of the Seas will make 17 stops in the UAE capital starting in January 2013.

Royal Caribbean Regional Director for Europe, Middle East and Africa, Helen Beck, commented on the news, "The resilience of the Middle East market is very encouraging. Bringing a new-look Serenade of the Seas to the region is testament to that belief. She will undergo a complete renovation and will boast a number of new food and beverage outlets and attractions that haven’t been seen here. It will certainly up the game for the regional industry."

Royal Caribbean's first quarter bookings in the Middle East have surged up despite some concern around the world with the state of cruise ship safety.

Royal Caribbean believes the uptick in bookings can be attributed to a recent marketing initiative that worked to increase awareness among potential travellers in the region.

Royal Caribbean Executive Director for the Middle East Lakshmi Durai commented on the good news, "We are 30 per cent up, first quarter to first quarter [last year]. We still have a huge population that is [yet] to experience cruising, so potential is high. Awareness is being created."

The cruise industry is also playing an increasingly important role in the UAE's tourism growth strategies. Growth over the past decade has been phenomenal in the sector. In 2001, Dubai received just 6,900 passengers on a handful of cruises that stopped in the emirate. Now, the UAE is considered to be the regional hub for the industry and last year Dubai received about 135 cruise ships with 375,000 tourists, according to figures from the Dubai Department of Tourism and Commerce Marketing.

By 2015, Dubai hopes to attract 180 cruise calls, carrying 625,000 passengers. In October, the emirate announced plans to build a cruise terminal to accommodate the expected growth in the number of passengers.

Royal Caribbean expects to double its business in Middle East

Helen Beck, Royal Caribbean's regional director for the Middle East, expects to more than double its business in the Middle East over the next three to five years.

"Over the next three to five years, we plan to more than double our business in the Middle East, and possibly even triple it."

Beck said that Royal Caribbean recorded a compounded annual growth rate of about 40% in guest volumes and revenue in the Middle East over the previous five years. Beck expects that momentum to continue despite some recent challenges to cruising, such as the political instability that has struck a number of countries.

Despite the "Arab spring" that disrupted the regimes of many Middle Eastern countries, Beck claims that business was relatively unaffected, "Royal Caribbean suffered no negative impact during the Arab Spring. On the contrary, we recorded a 30 per cent growth in the Middle East in 2011 over the previous year."

For Royal Caribbean, the United Arab Emirates represents for 25-30 percent of its business in the region.  In total, about 15,000 passengers constitute the Middle East cruise region for Royal Caribbean.

Asked how the company is expected to fare in 2012, Beck said the year will be a tough one as Eurozone troubles are likely to have an impact on the cruise market. "However, we are not solely dependent on the European markets," she said. Beck said that while the North American market accounted for 80-85 per cent of Royal Caribbean's business until five years ago, in 2012 the cruise line expects its revenue to be equally divided between North America and the rest of the world. 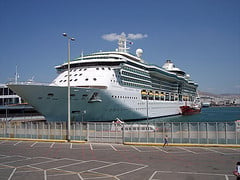 Europe remained the most popular destination for passengers from the Middle East. with approximately 75 percent of all bookings from the region were made for European cruises.   Following Europe was the Caribbean.

Royal Caribbean's Executive Director of the Middle East, Lakshmi Durai, commented on the news, "All markets performed well and showed positive growth compared to last year.  We are very happy with the support we get from travel agencies around the region and our education programme as well as marketing and PR activities are successfully demonstrating the advantages of cruising as a holiday option for guests in the Middle East."

Brilliance of the seas begins longest season in the Persian Gulf

Thanks to an increased demand in the Persian Gulf region, Royal Caribbean has decided to extend its third consecutive season in the Gulf to six months.  This will run from November 2011 through April 2012 and will be the longest season ever for Royal Caribbean in the region.

Cruises during this season will be comprised of 18 round trip 7-night sailings and two Dubai and India 12-nights sailings.  Brilliance will starts her 7-night itineraries in Dubai, then sail to Fujairah and dock in Muscat, where guests can enjoy an overnight stay in the port. Brilliance then continues with a sea day, via Abu Dhabi and then back to Dubai.

In addition, Royal Caribbean is the only cruise line in the region that will offer two new 12-night sailings that include stops in India.  Coming from Dubai, Brilliance of the Seas will spend three days at sea before stopping in Goa, New Mangalore and Cochin before docking in Muscat and then sailing back to Dubai.

In:
Brilliance of the Seas Dubai Middle East

Demand is so big for Royal Caribbean's cruises in the Middle East that the company has decided to extend its third consecutive season for the 2011/2012 season.

The new cruise season will include 18 round-trip seven night sailings and two Dubai to India 12 night sailings from November 2011 through to April 2012.

Brilliance of the Seas was almost completely booked for Royal Caribbean's second Gulf season from her homeport in Dubai.  Brilliance has been sailing seven night itineraries with stops in the region in places like UAE, Muscat, Fujairah, and Oman.

Thanks to the increased demand, Royal Caribbean has also added two new 12 night itineraries including stops in India for the first time.

Royal Caribbean International’s regional sales director Helen Beck was excited about the demand, "We were in the happy position that the majority of our seven-night sailings were close to being sold out, with some limited availability on the late March and April sailings. We’re equally pleased with the performance of our new 12-night itineraries to India and they are on track to sail at full capacity also.”

Royal Caribbean announced that it will expand the number of cruises to the Middle East in November thanks to increasing demand for its current itineraries.

Royal Caribbean says that its sailings for this season are nearly completely booked and it appears that wont be changing soon. Royal Caribbean Execuritve Director for the Middle East explains the increase in cruises, "Interest in our cruises has been so strong that we will be adding more sailings in our third season starting in November 2011".