Our first port stop brings us to Juneau, Alaska and I had such high hopes for today that I just could not sleep this morning.  I woke up around 6am and just had to get up and check out the scenery. 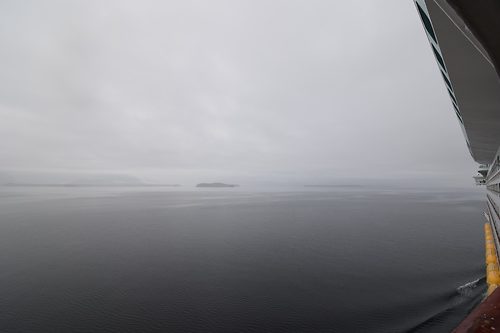 We were not scheduled to dock in Juneau until noon, but the voyage in takes a few hours and we got out first look at what Alaska is all about.

In the time it took to get to Juneau, you could see plenty of islands, landmasses and occasional wildlife.    It was also chilly in the morning, and the jackets came out quickly.  Regardless of the temperature, it was incredible to see the Alaskan landscape after all these months of waiting. Our ship docked perhaps a bit early and we met up with our shore excursion group at the end of the dock right on time. We had booked the Alaskan sled dog excursion, which was essentially half lesson on dog sledding and half play with dogs.

My biggest problem with group excursions is the pace of the event being too slow, but this excursion went quite well.  They broke up the group, with some going on a dog sled first and the others meeting some of the dogs.  Everyone then met up at the end to play with the puppies. We started off with the dog sled race, where we boarded a dog sled on wheels and had a real dog sled team take us down a course in the area. It was incredible to see the whole team of dogs working in tandem and it was a lot fun racing around the corners of the course and seeing how fast they could get up to. After the race, we got to meet the dogs. We started off with the dogs that took us on our race, meeting each pair of dogs that were part of the team. The piece de resistance had to be the puppies.  They had a few different puppies of various ages including some puppies that were just a few weeks old.  My wife and kids were in heaven! At just about two hours, the dog sled excursion was the perfect amount of time.  Of course, my wife would have preferred a few more hours playing with the puppies but we all had a great time interacting with the dogs of all ages.

The excursion bus dropped us off downtown (we had the choice of going downtown or back to the ship), so we found a cab waiting and hopped on to go to Mendenhall Glacier Park. The taxi ride over was about $35 each way plus the admission cost to the park (plus a pit stop at McDonalds for the kids). Since it was later day and we did not want to push things with the kids, we decided to take the relatively short trail to Nugget Falls, which provides not only an upclose view of a really large water fall, but also a fantastic view of Mendenhall Glacier. 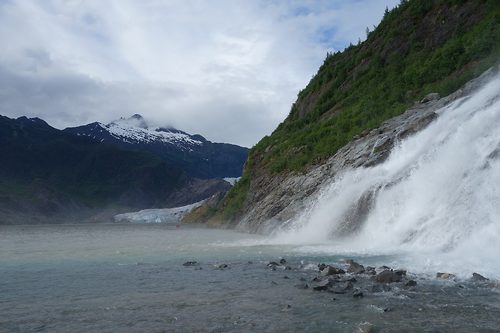 For me, coming to the glacier and seeing nature in all of its glory was worth every penny and hour on the airplane.  It was simply incredible, and I wish I could have just sat down in a beach chair and took in the view.

Afternoon turned to evening and we had to head back to the ship. Unfortunately we did not have time to visit downtown Juneau and take in the food and culture there, but it was an incredible day. Back onboard Explorer of the Seas, we got the kids up to Adventure Ocean and then grabbed a quick drink in the Concierge Lounge before heading down to dinner. It was 70’s night on the Royal Promenade but we were pretty darn tired and have an early day tomorrow, so called it a night.

Tomorrow we will be in Skagway, Alaska.