Weather Decision Technologies, Inc. (WDT) announced that Royal Caribbean Cruises Ltd. (RCL) has selected WDT’s WeatherOps risk mitigation system to implement on all of the ships in the Royal Caribbean International fleet, as well as in the emergency operations centers in Miami as of November 2017.

WDT’s WeatherOps platform was chosen to support RCL’s global cruise line operations after real-world validation and the approval of each captain in each division. RCL’s shore side team in Miami will also utilize WeatherOps to support captains across the fleet and ensure that logistics and weather safety across all aspects of the company’s operation are handled with respect to any weather hazards or delays.

"We are extremely excited to be using WDT’s innovative technology to ensure that our ships and Captains can plan the safest route possible for our guests and crew members," said James Van Fleet, Chief Meteorologist, Royal Caribbean International. "Our goal is always to make sure our guests have the best vacation possible, and this technology helps us do that."

Royal Caribbean announced today it will be the Official Cruise Line of the New York Knicks, New York Rangers and the Arena Concert Series at Madison Square Garden. Royal Caribbean will enjoy significant brand exposure at The Garden during all Knicks and Rangers games, as well as during concerts at Madison Square Garden. This includes courtside and in-arena LED signage throughout the Arena, featured spots on MSG’s GardenVision and features on Knicks and Rangers digital and social assets.

"As the number one cruise line in the world, Royal Caribbean is a fantastic addition to our legendary group of marketing partners and we look forward to working with them on some exciting initiatives," said Ron Skotarczak, executive vice president, marketing partnerships, The Madison Square Garden Company. "We are excited to provide incredible value for our newest partner that will help drive their business."

Royal Caribbean has signed a three-year contract with U.S.-based Cintas to produce, provide and maintain employee uniforms across the fleet. Royal Caribbean global supply chain officer, Mike Jones, says the new deal with Cintas had its beginnings early last year, when the line’s board of directors expressed interest in developing more partnerships in China to demonstrate its commitment to the region, beyond basing more ships there.

“As part of that request, the executive committee asked supply chain to go out and identify several key partnerships that have an impact on employment and what we spend there, and would be recognized by the government as a contribution to the overall economy,” Jones explains.

“Cintas refocused their efforts on sourcing from factories in China, and they’re increasing their production there,” Lisa Ghai, Royal Caribbean Cruises Ltd. manager of hotel procurement, says of the multimillion-dollar deal. “At the same time, we’re able to offer our internal customers significant savings on some of their highest volume items, so it was a win-win.”

Royal Caribbean extended its deal with Mood Media Corporation to be the sole provider for all the on-board, overhead music for Royal Caribbean's new Quantum class cruise ships. Mood has provided the sound for Royal Caribbean ships in 220 distinct zones of music across 12 ships since 2007. In creating Royal Caribbean’s on-board sound, music designers carefully capture the global, exploratory nature of the company and its guests by blending traditional classics and contemporary favorites with hand-picked Italian, Spanish, French, English and Asian selections.

Additionally, Mood now provides music to the smart ship via 14 players covering 28 zones (gym, spa, smaller themed restaurants and larger dining halls, café, casino, pool deck, discotheque and more). One featured program is the highly customized RCC playlist, “Royal Caribbean Core.” The music straddles the line between familiar mainstream pop and hip indie pop to convey exhilaration and adventure. The tracks feature “seize-the-day” lyrics and a feeling of momentum from artists like Fitz and the Tantrums, U2 and Coldplay.

Royal Caribbean Vice President of Entertainment, Nick Weir, commented on the new deal, "After years of experience working with Mood Media as a music provider to our fleet, we knew we were placing our ship in good hands. The team was a key contributor in achieving the big picture experience we envisioned for our 21st century patrons"

“Royal Caribbean ascended above its competitors within the tourism industry because they value the importance of creating a holistic cruise experience that truly touches all sensory touch points for their loyal guests. They certainly took that mindset to another level with the new Quantum Class, and it’s a very exciting time for them,” said Ken Eissing, President of Mood Media – North America.

Royal Caribbean and Florida International University (FIU) will unveil a 130,000-square-foot, state-of-the-art rehearsal and production studio on Friday and announce details of a new partnership that will include collaborative research and talent development. Dubbed, "MyCruise Rewards",  the program will allow cardmembers to redeem points not only for the cruise brand they pick, but also across the other two sister companies that are owned by the Royal Caribbean parent company.

Through MyCruise Rewards, cardholders can earn discounts on cruise-related packages and redeem points for cruises, stateroom upgrades, specialty gifts, and onboard credit across all three cruise lines. The new cards provide double points for purchases on Azamara, Celebrity, and Royal Caribbean, and one point for every dollar spent on all other purchases.

Carol Schuster, Royal Caribbean Senior Vice President, Marketing commented on the deal, "We know how important choice is to our guests, so the new cardmember benefits introduce a variety of rewards, such as more than 100 redemption options, making it easy and fun for our guests to enjoy flexibility as they treat themselves while vacationing with our brands."

Card offers, including fees and rates, can be found at www.royalcaribbean.com/mycruiserewards.

In:
Crown and Anchor Partnerships

Royal Caribbean announced today that it is partnering with MGM Resorts International to create a strategic relationship that will offer members of both loyalty programs opportunities to more rewards. 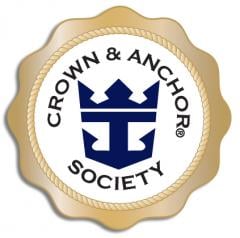 Likewise, M life members will receive offers with a range of benefits when sailing with Royal Caribbean.  As members advance to the next M life Tier Level, their cruise offers and benefits will grow.

Royal Caribbean executive vice president of Global Sales and Marketing, Lisa Bauer, commented on the deal, "Whether on land or at sea, Crown & Anchor Society and M life members will enjoy unprecedented recognition for their dedication to our brands. We are delighted to be an M life preferred partner and welcome M life members aboard to experience our world-renowned Gold Anchor Service, innovative cruise ships, unexpected onboard amenities, and unforgettable itineraries to exciting destinations.”