In:
Ovation of the Seas Live Blog
By:
Jenna DeLaurentis

Today was another wonderful day in Alaska as we explored Skagway, our last port of call.

Ovation of the Seas docked in Skagway around 2AM. After enjoying breakfast and coffee in the Windjammer, we grabbed our bags and disembarked the ship. 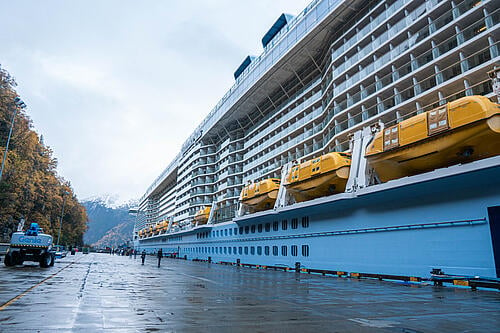 Today's plans were to travel on the White Pass and Yukon Route Railway, a scenic train ride that leaves from the center of Skagway and ends in Canada's Yukon territory. We booked the White Pass Scenic Railway excursion from Royal Caribbean.

The train would not be traveling all the way to the Yukon, of course. Our ride would be approximately two hours round trip and take us 2,000 feet up to a stop called Glacier Station. 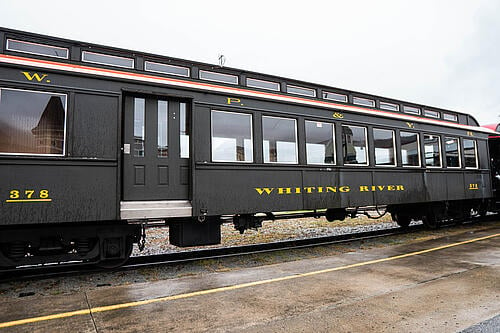 Another popular excursion offered by Royal Caribbean is on the same train, but it travels even further into the mountains to the White Pass Summit. This is under maintenance in 2021 but should be available for the 2022 season. 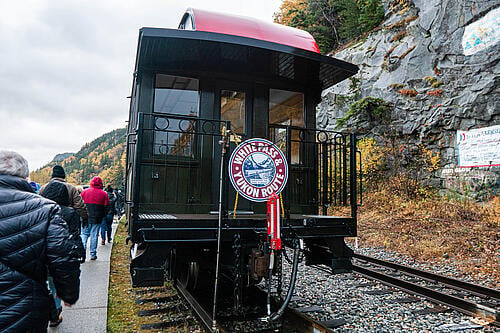 Boarding the White Pass is super convenient, as the train has a stop directly in front of the port.

Inside the train car are large windows to view Alaska's scenery. Each car also has a heater to keep the train warm as it passes through the snowy landscape. 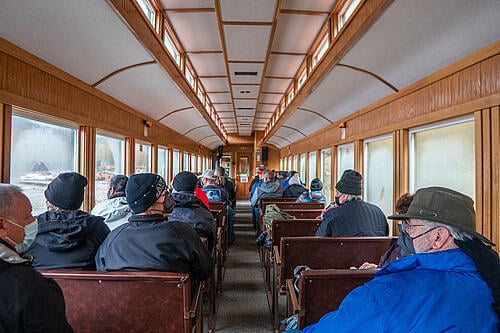 Once everyone boarded, the train began heading into the forest. Our engine ended up having a technical issue a few minutes into the ride and we made a quick detour back to town, but a few minutes later we were on our way.

The railway has an antique feel to it, with train cars designed from the Gold Rush era. A conductor came through each car to collect tickets and it almost felt like we had stepped back in time. 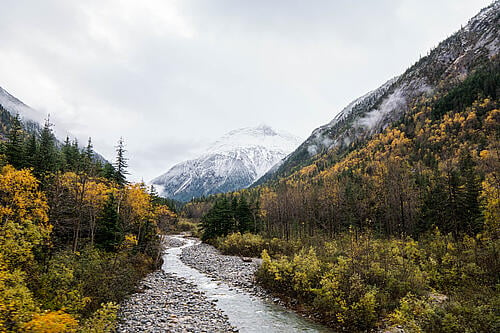 The ride starts by passing through Skagway and the historic Gold Rush Cemetery near town. It continues along a river and begins to gain elevation. The guide onboard highlights interesting points along the way, telling the history of Skagway's role in the Gold Rush era. 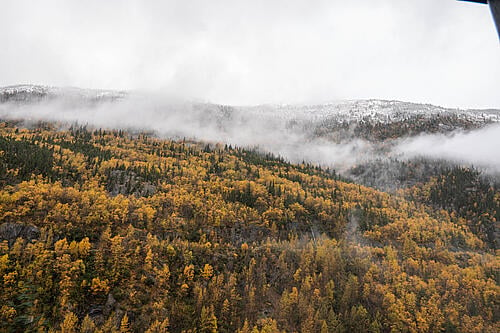 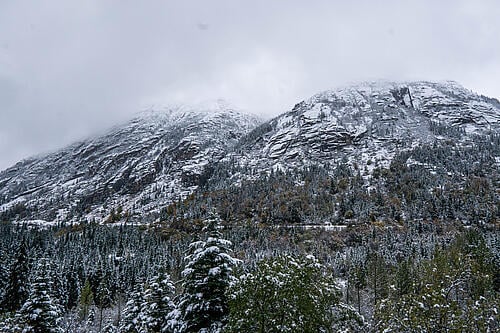 At around 900 feet elevation, the autumn colored landscape below was now covered in snow. It was absolutely beautiful and like a true winter wonderland.

Even though it was cold, the best spot to view the landscape is from the outside platforms at the front and back of each car. 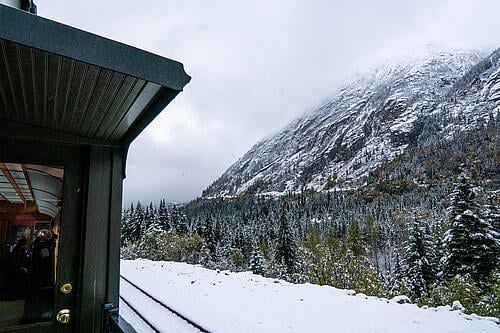 When we reached Glacier Station, the engine car was moved to the back (now front) of the train, our seats flipped around to face the other way, and we rode back to Skagway.

Once we got off the train, it was time to explore Skagway. Similar to Ketchikan, the architecture in Skagway was like something you could see in an old western movie. Shops, saloons, and restaurants lined the streets. 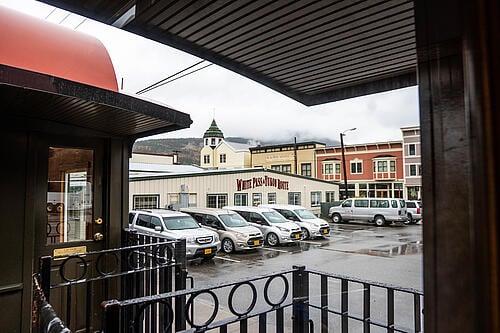 It was much colder today than in our previous ports of Ketchikan and Juneau, and since this sailing is the last ship to go to Skagway for the 2021 season, many businesses in town were closed. However, we were still able to find several places to explore. 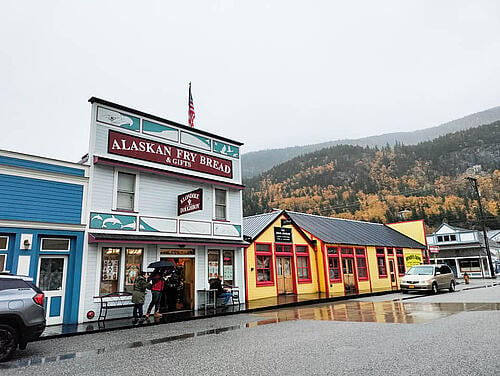 First up was Klondike Doughboy, a small store which makes Alaskan Fry Bread. Fry Bread is a giant piece of sweet fried dough covered in cinnamon and powdered sugar.

Shivering and hungry, my dad and I split a giant warm, sweet fry bread and it was undoubtedly delicious. I highly recommend visiting Klondike Doughboy if your cruise docks in Skagway! 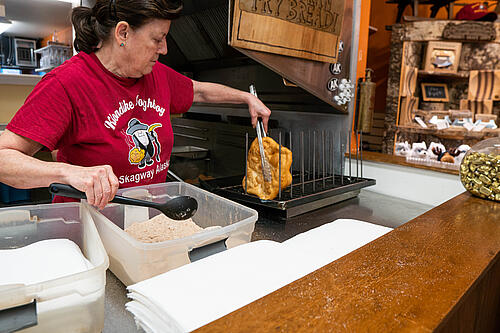 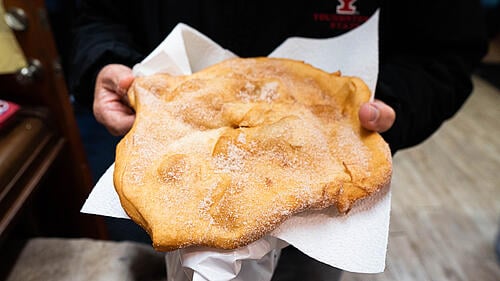 Conveniently located next to the warm, doughy fry bread was Glacial Coffeehouse, where we enjoyed hot chocolate while looking through the window at Skagway's rainy streets. 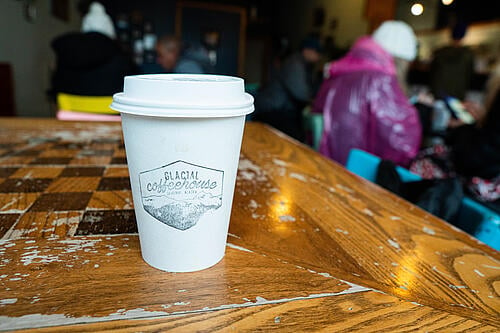 After warming up in the coffeehouse, we continued walking through town and checking out the shops. 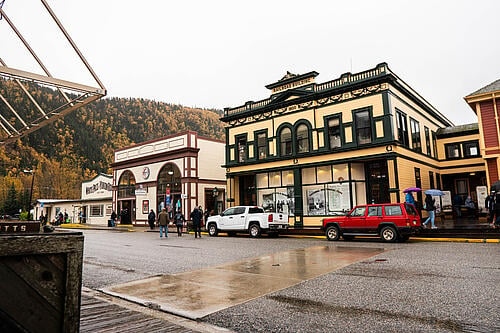 The weather was unfortunately very cold and wet, so we called it a day a little early and got back onboard with one thing in mind: the hot tub.

The indoor pool area on Ovation of the Seas has two large hot tubs, so we relaxed there for a while before getting ready for dinner.

Dinner tonight was in the Main Dining Room. We watched the choppy waters pass by as we sailed out of Skagway while enjoying our meal. From steak to curry, ice cream, and apple pie, it was excellent. 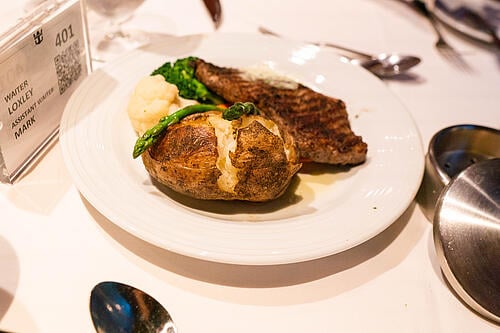 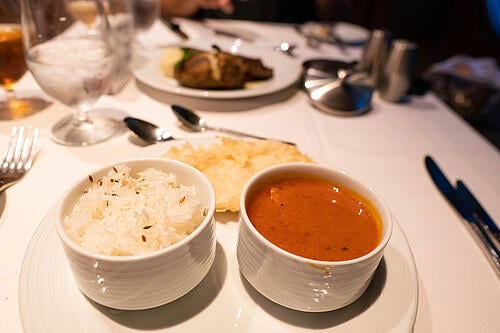 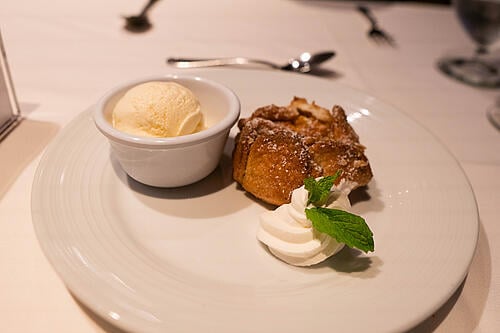 Dinner was followed by live piano music at Schooner Bar and later the guitarist at the pub. I love how there are so many places to listen to live music onboard and it is always a nice way to end the day.

Overall, I thoroughly enjoyed all of our port stops in Alaska and am already itching to visit again! Tomorrow we will sightsee at the Endicott Arm & Dawes Glacier while staying on the ship before starting the journey back to Seattle.

I was happy I booked the train excursion today because Skagway did not have much going on. This probably isn’t the case in summer, but since it was the last day of the season, there wasn’t much to do.

The pub guitarist on this sailing is awesome!

I prefer a larger Main Dining Room to the smaller venues offered on Ovation of the Seas. The small venues have nice decor, but I miss the big open feeling of one large dining room.

The internet onboard has remained consistently good throughout this sailing. If you’re booking an Alaskan sailing and need good internet, a newer ship like Ovation of the Seas would be a good option.

Getting from the ship to the center of Skagway was a longer walk than in Ketchikan and Juneau but there were small shuttles available.

It may have been cold and rainy some of the time, but don’t let the weather forecast scare you when selecting a date for your Alaska sailing. The weather in Alaska seems to change every five minutes! Plus, going to Alaska later in the season brings wonderful fall colors and snow capped peaks.