In:
Ovation of the Seas Live Blog
By:
Jenna DeLaurentis

Our first port stop on Ovation of the Seas brings us to the small town of Ketchikan in southeast Alaska. The scenery, history, and culture of the island far exceeded my expectations, making today a truly unforgettable travel experience.

After waking up just as the sun was rising around 7am, we ate a quick breakfast in the Windjammer. We continued our daily tradition of heading to the Windjammer’s outdoor deck to see some amazing views of Alaska on both sides of the ship. 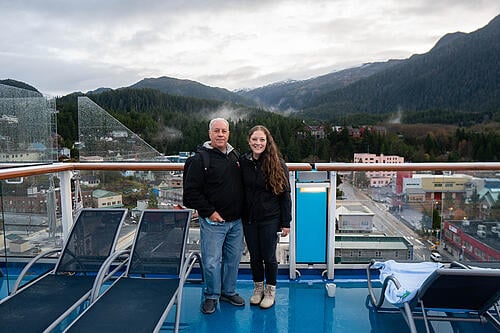 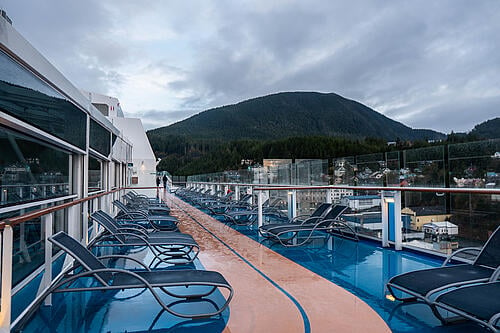 Prior to my sailing, I researched what Alaskan weather would be like in October and expected every day to be extremely cold, rainy, and windy. However, the weather today was only slightly chilly and had only very light rain throughout the day! Watching the fog roll over the rainforest and the slow movement of the glassy water was a peaceful start to the day. 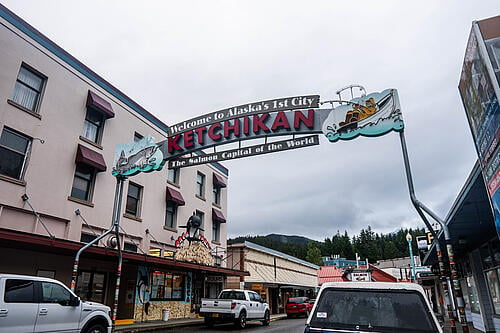 We took advantage of the nice weather and disembarked the ship around 7:30am. As we booked a shore excursion later in the morning, we had a little time to explore Ketchikan before the tour began.

Ketchikan is known as Alaska’s first city and the salmon capital of the world. Non-natives were attracted to the resources Ketchikan offered, such as fish and lumber, and formally established the town in 1892. Ketchikan is very small and walkable. In fact, there are no roads out of the island and many of the locals I talked with said they do not own cars. 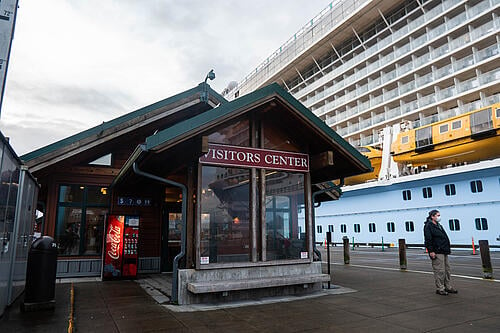 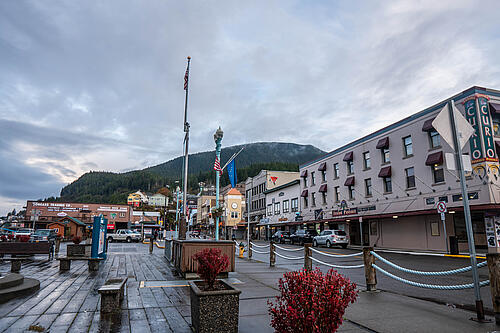 The port is located right in the center of town. Once you get off the ship, there is a Visitor’s Center where you can learn more about the island and excursion opportunities. There are also many souvenir shops and restaurants nearby.

The architecture in Ketchikan reminded me of a historic mining town and it was fun to walk around and explore on our own. The town is dotted with totem poles created by the native Tlingit people of Ketchikan, which was really fascinating to see, and spectacular views were abound everywhere we looked. 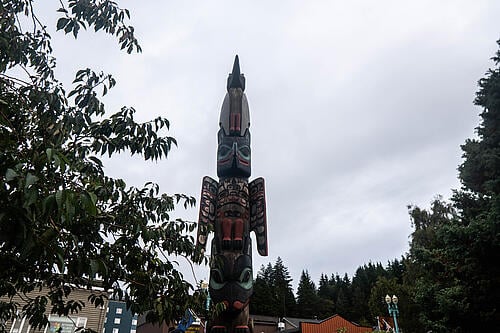 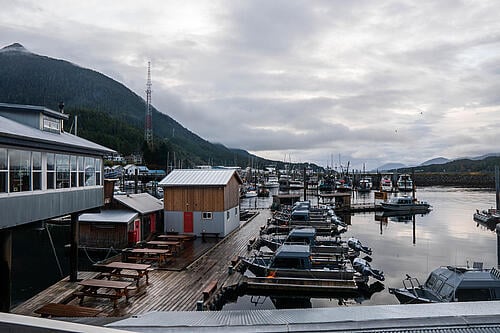 At 9am, we headed back to port to board a bus for our shore excursion. Originally, our cruise was not supposed to go to Ketchikan. Due to a storm in the Sitka area, though, our itinerary changed. Therefore, we decided to book the Saxman Native Totem Village excursion in Ketchikan. 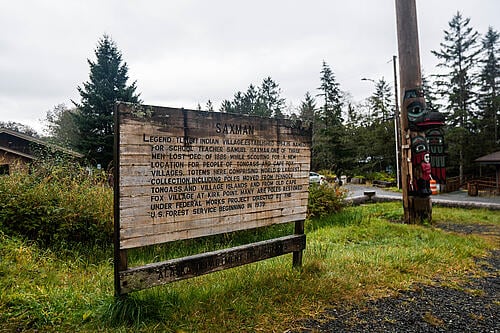 This excursion brought us to Saxman, a small town right next to Ketchikan primarily inhabited by the Tlinget people. The tour began with a brief lesson on the history and culture of the Tlinget people, who have inhabited Alaska for thousands of years. 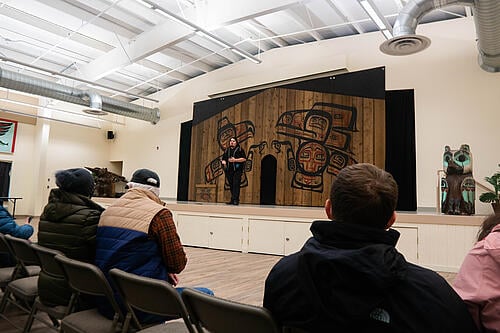 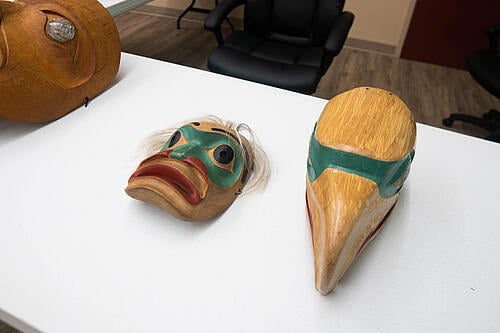 We then enjoyed a dance ceremony by a group of locals dressed in traditional wear. It was fascinating to see and learn about a culture that has existed for so long in the place we were visiting for just a a few hours. 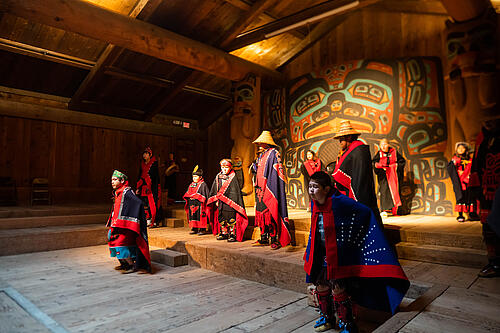 We then walked outside to a path lined with totem poles, which tell traditional stories passed down through history or are created to honor a specific person or animal. The totem poles are traditionally painted black, blue, and red. 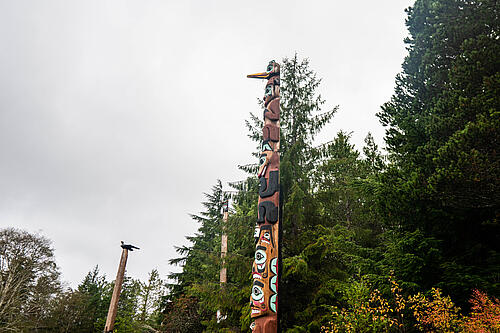 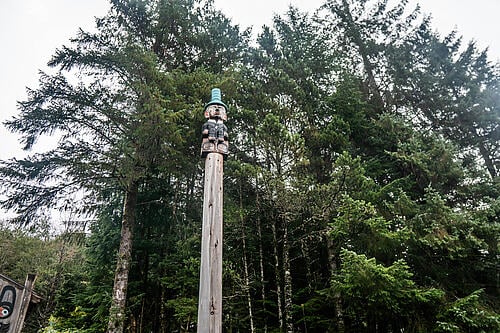 After a quick stop to see where the totem poles are carved, we made our way back to the center of Ketchikan to continue exploring on our own.

While we originally planned to eat at the Alaska Fish Market right on the water, the line was pretty long, so we looked for somewhere else to eat. On the way, we passed the Great Alaskan Lumberjack Show, which looks like a really fun activity to do in Ketchikan. 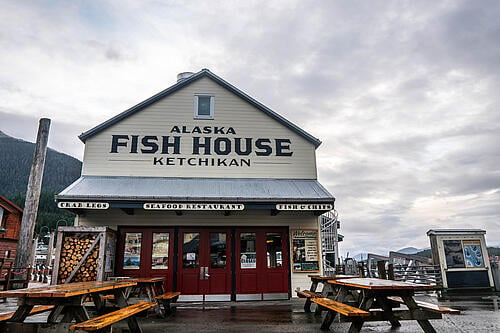 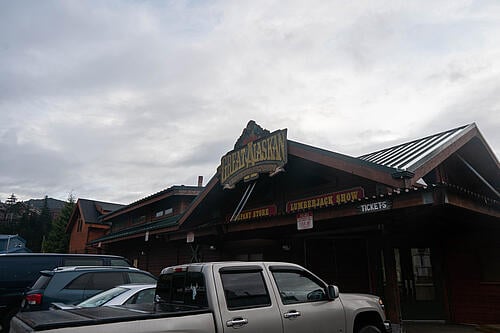 Lunch took us to the Pioneer Cafe, where we enjoyed classic diner food in a 50’s inspired setting. 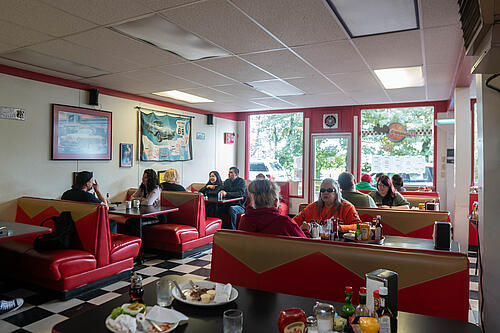 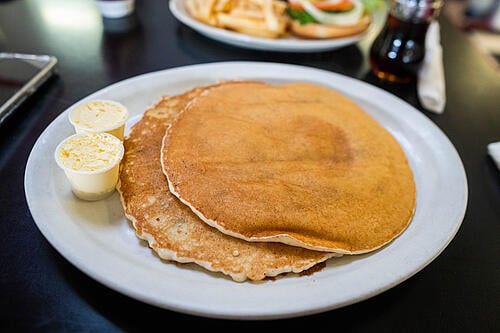 There were still a few hours left in port after lunch, so we walked to Creek Street, the former red light district in Ketchikan. This was one of my favorite areas of the city, with historic buildings and walkways lined up against a creek.

We explored the walkways and got out our binoculars to watch two seals playing in the water. 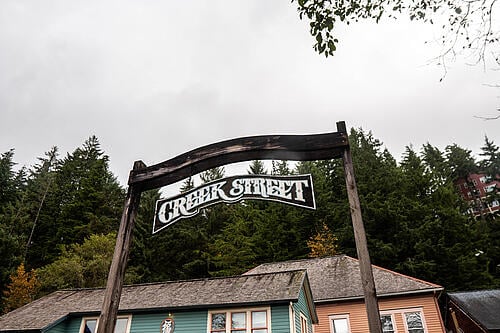 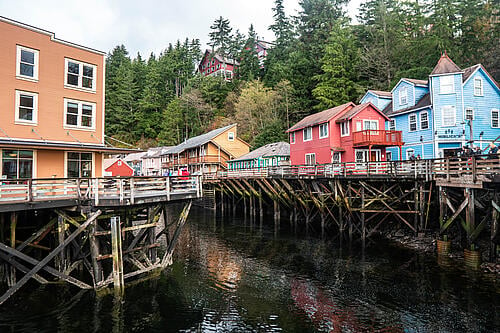 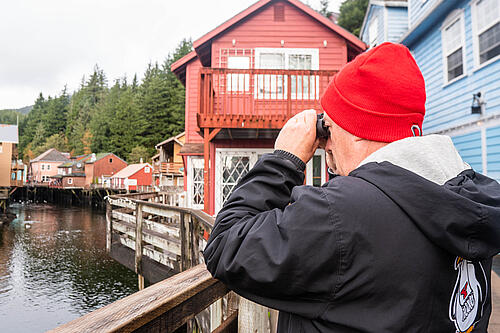 At the end of Creek Street, a path continued into the forest which led to a lodge up the hill. Ketchikan is in the Tongass National Forest and is covered in lush greenery, so the walk was especially beautiful and featured great views of the city, the rushing water, and Ovation of the Seas. 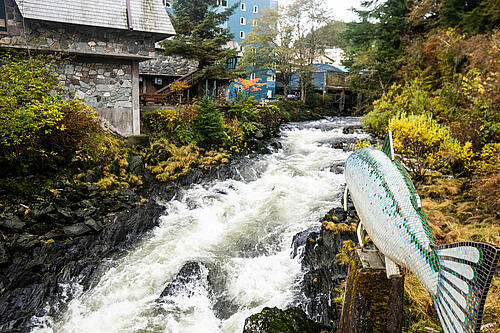 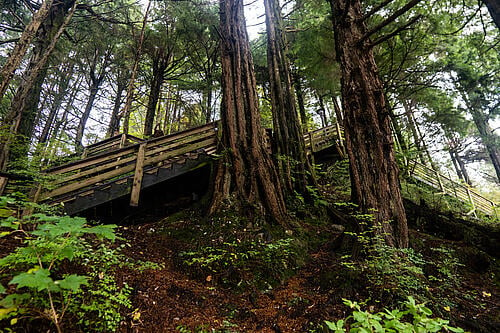 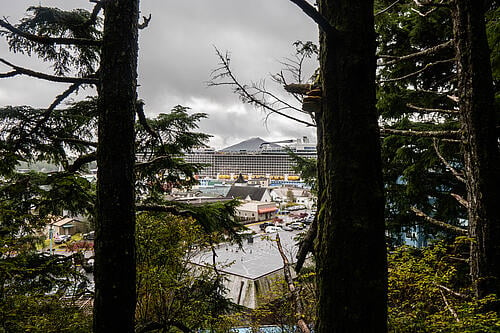 My dad and I have a goal of visiting a brewery in each Alaskan port we visit, and today we visited the Bawden Street Brewing Company in Ketchikan. It was a quaint space with fresh beer on tap and we had no complaints! 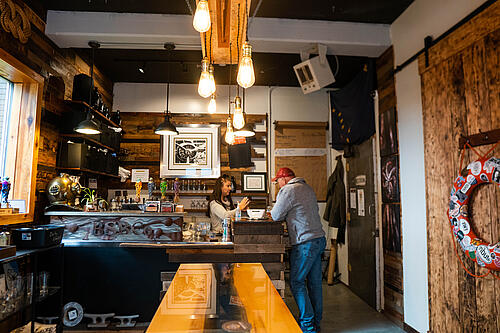 Before getting back onboard, we stopped by one of the souvenir shops lining the street in front of the port to buy gifts to bring back home.

Once onboard, I headed to my cabin to relax before walking over to the North Star. Unfortunately, the captain decided to leave port a little earlier to avoid storms at sea, so our North Star time would not be operating. I was hoping to get the chance to get on the North Star on this sailing, but it looks like I may be out of luck since it is fully booked!

Sailaway featured more unbelievable views, and we grabbed a drink at the pool bar to watch the scenery pass by. 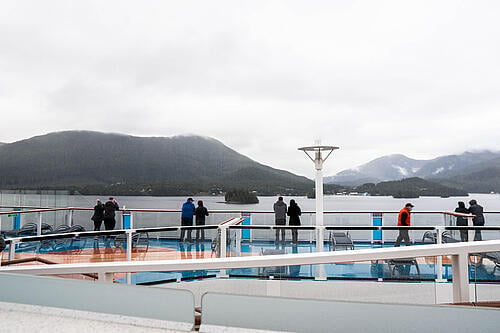 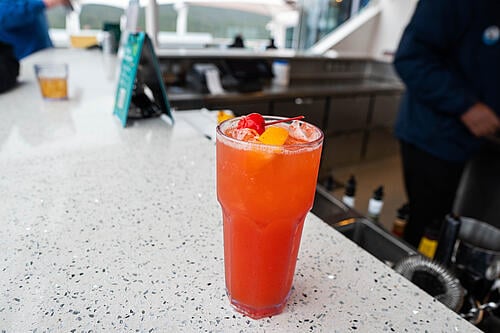 Dinner tonight was at Silk, one of the main dining areas on Ovation of the Seas, where we enjoyed Indian curry, chicken parmesan, arugula salad, and dessert.

Tired from a long day of exploring, we relaxed in the Solarium briefly before heading to Two70 to watch Pixel’s Cabaret. 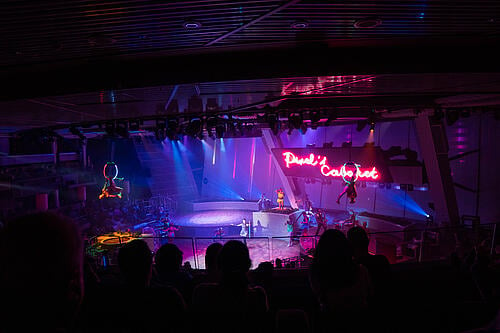 I failed to understand the storyline of the show, but the dancing and technology was impressive as always! So far, my favorite show onboard any Royal Caribbean ship has been “The Book” in Two70 on Odyssey of the Seas.

After Pixel’s Cabaret, I brought my laptop to the pub to listen to the guitarist and write this blog post. And now I’m off to bed!

Tomorrow we are due to arrive in Juneau at 10AM.

The shows and activities filled up quickly on this sailing due to a higher capacity. If you’re sailing soon, be sure to book entertainment and activities as soon as they appear in the Cruise Planner.

Royal Caribbean Blog reader Gene from Massachusetts informed me today at the pool bar that there are no Ovation of the Seas magnets available to purchase onboard, so he can’t add to his collection!

Ovation of the Seas Live Blog - Day 4 - Juneau
Today was filled with glaciers, "duck farts", and amazing views of the Alaskan Inside Passage. Here's everything we did…