Odyssey of the Seas should begin her conveyance soon

Royal Caribbean's next new cruise ship looks to be close to taking her next big step forward to joining the fleet. 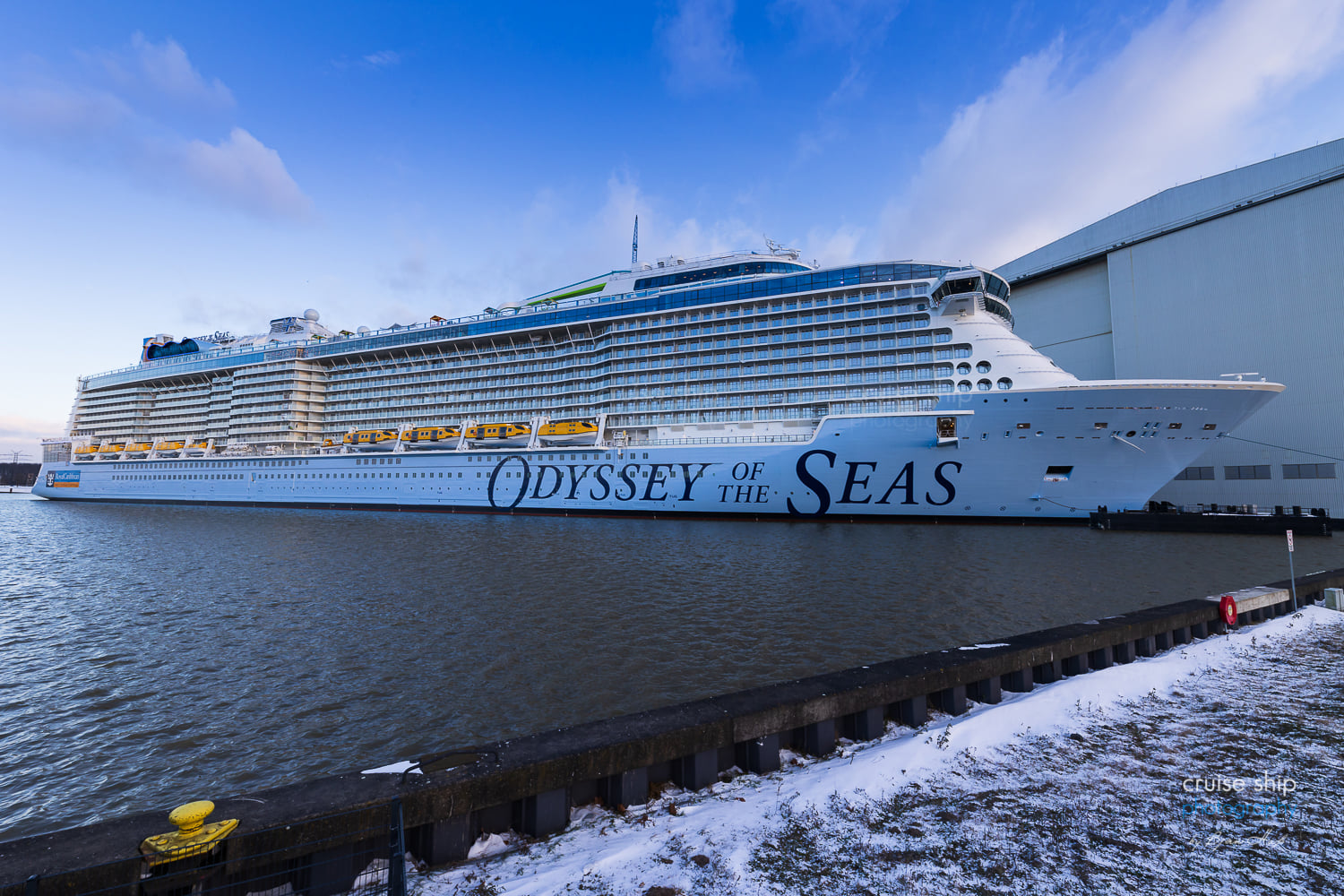 Based on activity at the Meyer Werft shipyard, Odyssey of the Seas is being prepared to begin her river conveyance.

Cruise ship observers near the shipyard have noticed Odyssey has been moved away from the pier so that all lifeboats can be lowered and tested.

RoyalCaribbeanBlog reader twangster also noted tide tables and notices of dam closures along the Ems River point to Odyssey of the Seas making the trip down the river towards the sea on the 27th of February.

In order to have a succesful conveyance, wind speeds must be 20 knots or less and a full or new moon present.

Neither Meyer Werft nor Royal Caribbean has announced or confirmed when the conveyance may take place. It is believed the conveyance will not be as grand a spectacle as it usually is in order to avoid crowd gatherings along the Ems River during the global health crisis.

Ever since being floated out in November 2020, Odyssey has been docked outside of the construction hall where she was assembled.

What is a conveyance? 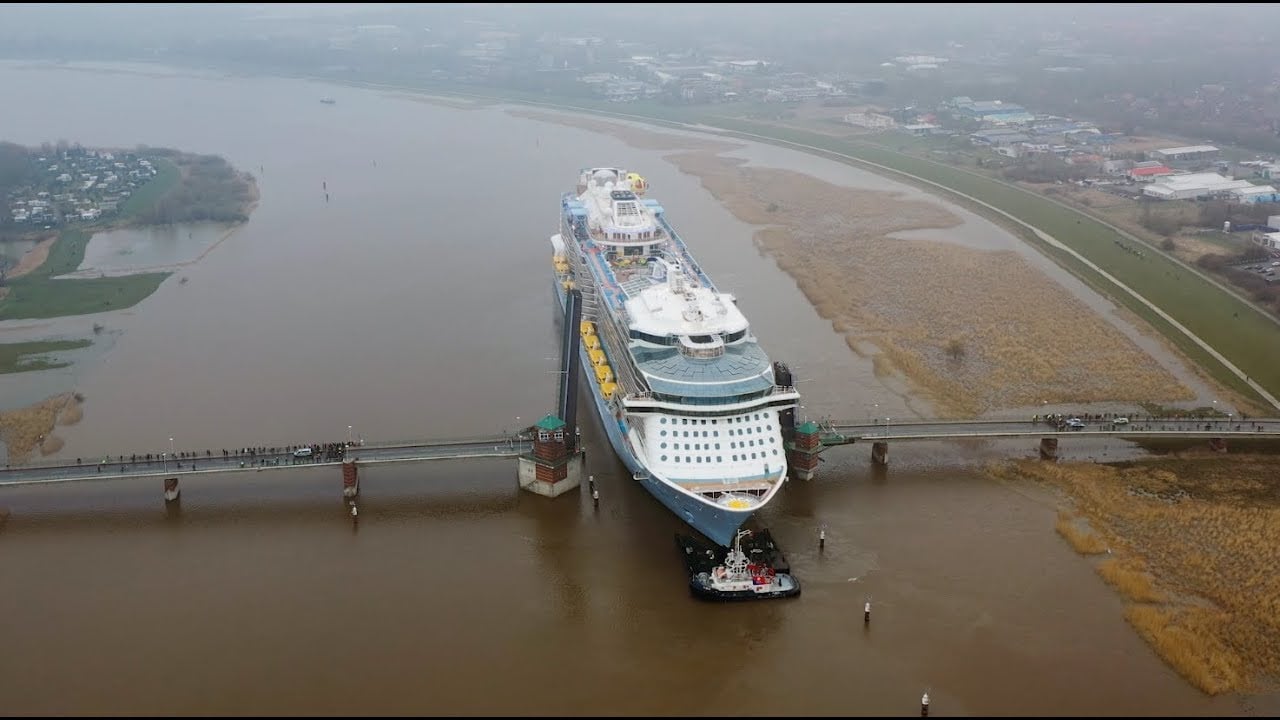 The conveyance is a planned move of the cruise ship from the shipyard to the North Sea.

Meyer Werft shipyard is in Papenburg, Germany, which is considerably inland from open ocean. Meyer Werft was built inland to avoid the impact of storms in the North Sea, and has been sailing ships down the Ems since 1795.

As a result, Odyssey of the Seas will be taken slowly down the 32 kilometer journey during a coordinated move that coincides with high tide. 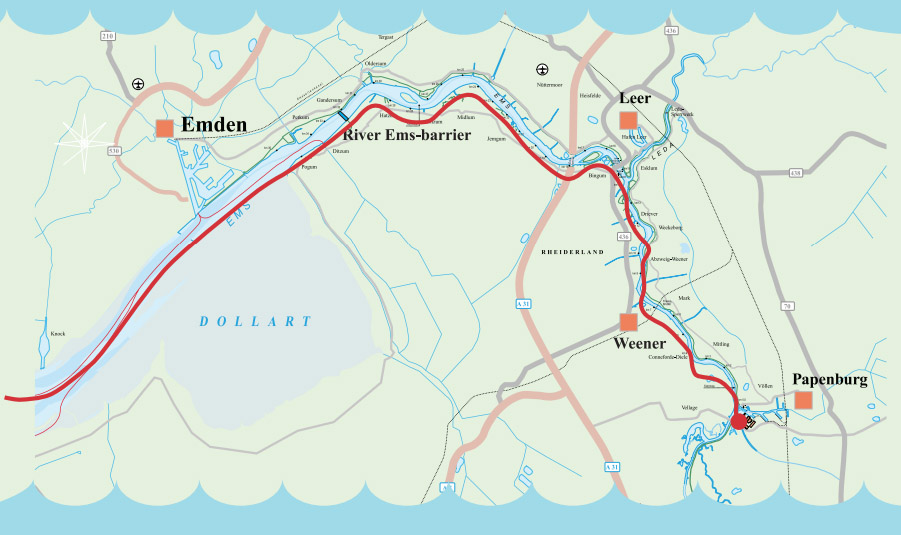 The conveyance has to occur when the tides are just right so that there is more water below the hull.  In addition, certain dams will be closed to increase the safety buffer.

In some places, there are only a few centimeters of clearance on either side of the ship as it travels from the shipyard to the channel.

Two tugboats on required to guide the ship, and the ship will move at approximately 2-3 knots down the river. 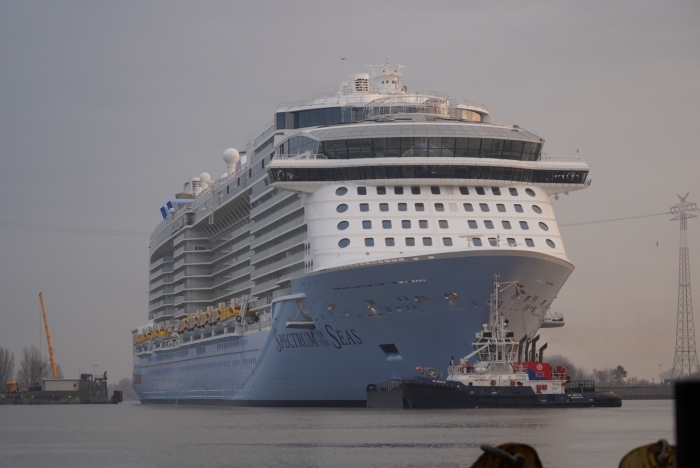 A total of 4 bridges are either opened or removed and power us cutoff to power lines at 3 locations causing them to shrink and rise up so the ship can pass with as little clearance as 1.8 meters.

Odyssey of the Seas will traverse her conveyance backwards down the river in order to optimize control. Going backwards protects the azipods and propellers since the rear of the ship stays in the center of the river when maneuvering in reverse.

It takes about 10 hours to complete the conveyance, although the time will vary based on a variety of conditions. 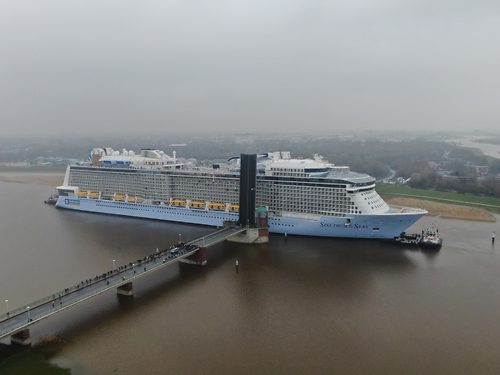 Each of the Quantum Class ships that came before Odyssey of the Seas have been successfully moved down the river during their conveyance. In most years, the conveyance is as much a celebration as a technical maneuver.

In fact, the Quantum Class ships are one of the largest cruise ships to leave Meyer Werft and travel through the Ems River. 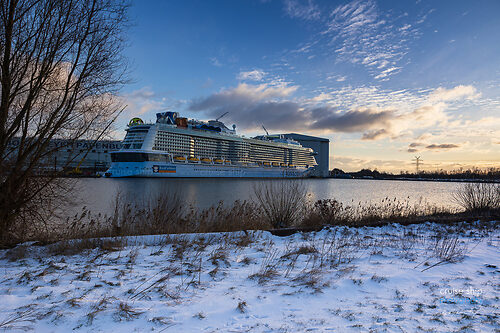 Once the conveyance is complete, sea trials will likely commence, followed by handover of the cruise ship to Royal Caribbean.

No delivery date has been announced yet, other than to expect it in Spring 2021.

Spotted: New Royal Caribbean show celebrating showgirls
We may have an idea about one of the new shows coming to Odyssey of the Seas.Senior Vice President of Entertainment for…