AWE is carrying the first season of "Dream Cruises", which features a look at select Royal Caribbean ships and what a cruise ont hem is like.

Here are the episodes that are available

The series originally aired in 2011 but it's still a fun way to get a little Royal Caribbean in your life.

Here's a quick preview of the Allure of the Seas episode

The 30 seconds commercial features upbeat music and shows a number of ships, islands, restaurants and activities that emphasize the "WOW" factor Royal Caribbean promotes are part of its cruise experience.

What do you think of the new spot?

Happiness is giving everyone on the crew at @greysabc a @royalcaribbean cruise. Blessed to have 200 episodes! … http://t.co/JieHdwbVhh

Along with Executive Producer Mark Gordon, the cast and crew of the show each received a free trip on a Royal Caribbean cruise.

Not a bad way to celebrate!

Royal Caribbean has agreed to extend its satellite TV channel contract with Oceans TV for two of its cruise ships. 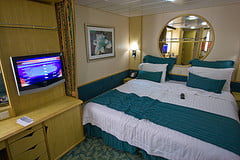 The first agreement extends the service for Serenade of the Seas while it cruises in Europe and the Middle East in Winter and Spring 2013. This will provide channels such as BBC World News, BBC Entertainment and CNBC Europe for English speaking passengers. Passengers from Italy can watch Rai News, Rai 1 and Mediaset Italia; TF1 and AB1 are available for French passengers while TVE Internacional and RTL Schweiz can be viewed by Spanish and German speakers respectively.

The second agreement Royal Caribbean extended its satellite TV channels for Splendour of the Seas.  As Splendour cruises the waters of South America, it will provide Brazil's largest commercial television network which is watched by an estimated 120 million people daily across Latin America.

A new TV show will air on Royal Caribbean's ships called "The Avid Cruiser Takes On...", which aims to showcase the various things you can do while at the many ports Royal Caribbean visits.

The series will be comprised of 10-minute shows that feature cruise destinations, primarily in Europe, and showoff what passengers can do in these ports.  The show hopes it will "get people off the ships, and into the destinations".

You can view the episodes on Royal Caribbean ships and possibly on the company's sister cruise brands such as Azamara Club Cruises and Celebrity Cruises.

The first episode is about Copenhagen, Denmark.  Destinations that will be highlighted in future episodes include

In:
Freedom of the Seas TV

If you're looking for a Royal Caribbean "fix" on television, there's a great show set to air soon.  The TV channel Destination America will air "Ultimate Cruise Ship: Building Freedom of the Seas" on Tuesday, June 26 at 8pm Eastern.

The show was produced in 2006 by the Discovery Channel and is still an interesting look at one of Royal Caribbean's biggest ships.

Here's a quick preview of the episode

Allure of the Seas to be featured in British television show

In:
News Allure of the Seas TV

The Allure of the Seas will be the backdrop for a new TV travel series hosted by comedian Paul Merton in the United Kingdom.  The Channel 5 show, Paul Merton’s Adventures, is begins on Wednesday October 19 at 9pm. 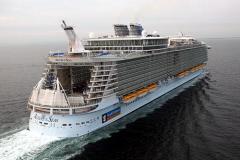 Merton will take a cruise aboard Royal Caribbean's mega-shop and will showcase Merton's onboard activities such as zip lining.

During the filming, Merton was impressed by the size of the ship, "I was amazed by the vastness of the vessel. You only appreciate how tall the ship is when you disembark and realise you’ve been in a floating tower block.”

In:
Oasis of the Seas TV DVR Alert

Quick programming note, National Geographic Channel is set to re-air its special hour long look at the construction of Royal Caribbean's Oasis of the Seas called "Man Made: World's Largest Ship", so be sure to tune in or set your DVRs to record it.

9:00pm: Ultimate Cruise Ship: Building of Freedom of the Seas (60 minutes)
The creation of the world's largest ocean liner.