In:
Category:
Oasis of the Seas
Cape Liberty

For the first time ever, an Oasis Class ship will offer sailings from the New York City area when in 2020 Oasis of the Seas spends the summer offering cruises from Cape Liberty, New Jersey.

Royal Caribbean's 7-night 2020 itineraries for Caribbean and Canada were posted to the website yesterday, and it shows Oasis of the Seas arriving to Cape Liberty on May 6, 2020 and staying through October 25, 2020.  Oasis of the Seas will return to Florida on November 4, 2020. 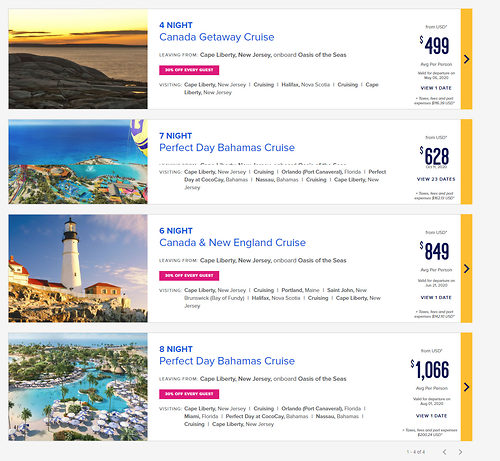 Oasis will sail one New England & Canada sailing on June 21, 2020 when she offers a 6-night cruise to Portland, St. John and Halifax.

Guests sailing on a Royal Caribbean cruise out of Cape LIberty Cruise Port in Bayonne, New Jersey, will have the option to take shore excursions to one of New Jersey’s oldest and most historic cities, Elizabeth. A new partnership between Royal Caribbean and EMI Global offers passengers the option to book a post-cruise excursion in and around Elizabeth.

Elizabeth is known for its historical precedence of being the starting point for New Jersey (est. 1664) and home of America’s founding fathers, like Alexander Hamilton, Elias Boudinot , Marquis de Lafayette and many others. Additionally, Elizabeth is noted for its rich ethnic diversity, representing more than 50 countries and 37 language groups, authentic cultural cuisine, and as being the 5th best City for Shopping in America due, in part, to being the location of New Jersey’s largest outlet and value retail center, The Mills at Jersey Gardens, a Simon Center.

Guests can get more information about these shore excursions at www.GoElizabethNJ.com/RCCLExcursions.

Royal Caribbean announced today it has changed deployment plans for which ship will be based in Cape Liberty, New Jersey, by replacing Rhapsody of the Seas with Vision of the Seas. From May 20, 2017 through the end of October, Rhapsody will offer a variety of exciting 7-night round trip sailings from Venice, Italy.

At the conclusion of the Mediterranean season, Rhapsody will return to Tampa, Florida as planned and begin sailings on November 19, 2017.

On August 22, Vision of the Seas will offer a 16-night Transatlantic sailing from Copenhagen, Denmark to Cape Liberty, New Jersey with several calls in Denmark, Norway, Scotland and Iceland.

On September 7, Vision will offer a 13-night open jaw sailing from Cape Liberty, New Jersey to Quebec City, Canada.  The sailings departing from Cape Liberty on September 20, October 1, and October 11 will replace the previously planned sailings offered on Rhapsody and include calls in Boston, Massachusetts, as well as multiple ports in Maine and Nova Scotia.

Vision’s current fall Europe itineraries, including those departing from Venice, Italy from August 22, 2017 through November 17, 2017 will be canceled.

To accommodate guests booked on the affected sailings, Royal Caribbean will provide vacationers with a full refund of their cruise fare, the opportunity to re-book on another Royal Caribbean ship as well as an onboard credit to use during the newly booked sailing. In addition, vacationers who purchased airfare through Royal Caribbean will receive a full refund. Guests purchasing their own airfare will be given a refund for their airline change fee. All refund transactions will be automatically processed back to the original form of payment within four to six weeks. Commissions for travel agents will be protected for all cruises that are fully paid.

Earlier today Royal Caribbean and the Port Authority of New York & New Jersey dedicated the new cruise terminal at Cape Liberty Cruise Port, which will be the home for Quantum of the Seas. Together, the gentlemen unveiled 10 photographs that capture the unique energy and character of historic New York Harbor through the eyes of photographer and International Longshoreman Association-member John Bacaring.

Following the unveiling, the officials and executives were invited to the very first preview of the new terminal, slated to welcome guests for the first time when Quantum of the Seas, arrives in New York Harbor on November 10, 2014.

“The development of the new cruise terminal is another example of how public private partnerships are supposed to work. By working together, Royal Caribbean and the Port Authority have been able to bring this world class terminal on line which can service the newest generation of large cruise ships,” said Port Authority Port Commerce Director, Richard Larrabee. “We look forward to continuing passenger growth with the arrival of the Quantum Class vessels to the harbor in 2014 and 2015. It’s been a pleasure working with Royal Caribbean on this important project.”

Thew new terminal is located at 4 Port Terminal Boulevard is a successful partnership between Royal Caribbean and the Port Authority to develop the Bayonne waterfront for cruise tourism. The first phase of the $55 million port expansion includes a new, state-of-the-art guest terminal, with 125,000 sq. ft. of check-in, customs and immigration, and luggage processing space, as well as a 950-car parking structure and pier improvements. The new facility is adjacent to the first cruise terminal, opened in 2004.

“Royal Caribbean thanks the Port Authority of New York & New Jersey and the City of Bayonne for this successful collaboration to develop Cape Liberty for cruise tourism.,” said Adam Goldstein, president and COO of Royal Caribbean Cruises Ltd. “The planned state-of-the-art cruise terminal at Cape Liberty will perfectly complement our Quantum-class ships, which will be the most technologically advanced ships in the world, and help generate jobs and grow the cruise industry regionally.”

In:
Category:
Cape Liberty
Quantum of the Seas
99 days of Quantum

We're just weeks away from Royal Caribbean launching its newest cruise ship, Quantum of the Seas, and each day we are showcasing something different about this amazing ship to get everyone ready for its debut.

While Quantum of the Seas is slowly making her way from her shipyard in Germany, Royal Caribbean is quietly working on expanding the port facility that will Quantum will call home.

Cape Liberty cruise port in Bayonne, New Jersey will be home to Quantum of the Seas and the port facility is being expanded to meet the needs of this massive new ship.

Our friend Mike Sobbell of Autism on the Seas sent in these photos from just a few days ago of how the port is looking. Many thanks to Mike for these photos and especially all he does with the Autism on the Seas organization.

Stay tuned for tomorrow's post as we celebrate 99 days of Quantum!

Royal Caribbean has already begun construction on it's brand new $55 million cruise terminal at Cape Liberty in Bayonne, New Jersey and today we have computer models of what the new terminal will look like.

Photos courtesy of Royal Caribbean and posted by NJ.com

The new terminal will be complete in November, just in time for Quantum of the Seas' arrival.

The new "state-of-the-art" guest terminal that will include 125,000 square feet of space for check-ins, customs and immigration and luggage processing.

Royal Caribbean announced today that it has entered into an agreement with the Port Authority of New York and New Jersey to build the next phase of the Cape Liberty Cruise Port in Bayonne, NJ.

The $55 million project will include construction of a new, state-of-the-art guest terminal, 900-car parking garage and pier improvements.

The new terminal will be the home for Royal Caribbean's next generation of cruise ships, Quantum of the Seas and Anthem of the Seas, which both begin service in November 2014 and 2015 respectively.

Ground breaking has already occurred and the new terminal will be complete in November 2014.

Last week plans for construction to begin on the renovations of Cape Liberty's cruise terminal were halted after the construction plans impacted a September 11th memorial.  The renovation plans are back on track now after the Port Authority has come up with a plan for ensuring the 9/11 memorial is not destroyed. NJ.com is reporting the small group of memorial pavers that encircle the 9/11 Teardrop Memorial at the south end of the Peninsula at Bayonne Harbor will be temporarily removed when repair work at the site begins.

The renovation work on the terminal is necessary to allow the port to accomodate Royal Caribbean's newest cruise ship Quantum of the Seas for her November 2014 arrival.

“The start of the construction is contingent on the city of Bayonne’s approval,” said Port Authority spokesman, Steve Coleman.

Coleman estimates the pavers will be out of the 9/11 memorial ground for roughly three to five months.

“These pavers will be restored to their original locations when the work is finished,” said Coleman.

Preliminary construction of the new cruise port facility in Bayonne, New Jersey was halted on Friday after it was discovered plans for the port makeover included the removal of hundreds of memorial pavers that surround the September 11 "teardrop" memorial.

Residents were "outraged" according to NJ.com, after learning the $50 million project would include the "temporary" removal of about 300 pavers.

Frank Perrucci, chairman of the Sept. 11 Bayonne Remembers Committee, said he was told by workers at the site that the construction project would cut through a portion of Harborview Park -- where the "To the Struggle Against World Terrorism" memorial is located --  and would mean the "temporary" removal of about 300 pavers.

The memorial will not be affected and workers indicated that the pavers would be put back into place when the construction is complete in May.

Joe Ryan, Bayonne spokesman, indicated the city would act as "conduit" for the project funds, allowing Royal Caribbean to take advantage of the city's favorable financing rates for the $50 million project that includes a new terminal and parking facility.  The city council approved the request Wednesday night.

In addition, Royal Caribbean will pay Bayonne a $250,000 application fee and $50,000 annually to monitor the financing.

City officials estimate the new port facility will be finished just in time for the launch of Quantum of the Seas in November 2014.