Royal Caribbean has been awarded a Peer Award for Excellence for its online Cruising for Excellence training platform in the Technology for People category.

Royal Caribbean's Cruising for Excellence program is an online option for travel agents to give a realistic onboard experience, which allows agencies to show off its ships to their agents without having to bring all those agents physically onto a ship.

Royal Caribbean trade training manager Michelle Russell commented on the win, "I am exceptionally proud of each and every member of the trade training team who all deserve a share of this prestigious award.Our trade partners are vital to our brand’s continued growth and we are committed to supporting them with training, ship visits and innovative marketing. Consistent trade feedback on Cruising for Excellence has been fantastic and the investment in training to bring our ships to life continues to convert yet more agents to be great Royal Caribbean International, Celebrity Cruises and Azamara Club Cruises ambassadors. This award is a reflection of that I am honored that the judging panel at the Peer Awards for Excellence recognizes our efforts and the quality of our offering."

Cruising for Excellence has so far trained over 20,000 travel agents since its 2006 launch. It is now available in 13 different languages. 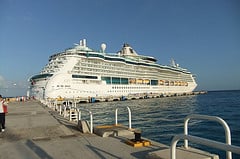 “We are much honored to be recognized again by Travel Weekly’s distinguished panel of industry experts and judges,” said Lisa Bauer, senior vice president of Global Sales and Marketing, Royal Caribbean International. “We are particularly encouraged that revitalized Radiance of the Seas won Gold for Overall Contemporary Ship. Radiance of the Seas is a glowing example of our ongoing ship revitalizations to introduce some of the most popular Oasis-class amenities across the fleet and make every ship our best ship for vacationers to enjoy.”

Royal Caribbean won on overall strength of performance. Some other lines were leaders in specific areas, but Royal Caribbean posted a strong across the board performance. They will have to remain on guard to keep up with competitors moving ahead with innovations such as: Norwegian, Crystal, and Disney.

Market21 used the Cruise Line Marketing Review, which measures 12 domestic lines against 18 criteria to determine how well they were performing using the current technologies, and how well they are prepared to move up to the newer technologies as they develop.

Travel+Leisure magazine has posted their annual awards for the best travel in the world, and Royal Caribbean made the list.

For the category of "Top Large Cruise Ships", Royal Caribbean made the #9 spot.

Here are the full results

Royal Caribbean's ninth spot finish was identical to last year's awards, although its score did dip slightly from last year.  Sister companies Celebrity Cruises and Azamara Club Cruises placed in the list as well, with Azamara moving up one spot from last year.

The scores are results of reader surveys from the Travel+Leisure Magazine.

Bermuda's Minister of Business Development and Tourism, Wayne Furbert presented the 2012 Royal Caribbean International Hospitality Awards on board the Celebrity Summit. Royal Caribbean's Vice-President of Government relations for the Caribbean, Latin America and Asia, Michael Ronan joined other members of Bermuda's government to present the awards.

The winners of the Hospitality Awards were

“To date, this program has donated hundreds of thousands of dollars in scholarship funds to 65 young Bermudians to assist them in tourism related studies,” said the Minister. “I am pleased to join with Royal Caribbean in awarding three deserving young Bermudians with scholarships.” 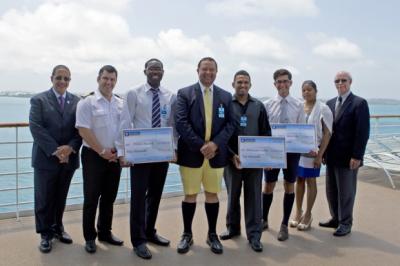 The Minister concluded by saying the Government is committed to helping young Bermudians achieve excellence in the hospitality industry. “This initiative celebrates that achievement and I want to extend a heartfelt thank you to Royal Caribbean Cruise Line International for their significant contribution and support that they continue to share.”

“We are honored to be recognized as the top cruise line for the ninth consecutive year by our valued travel agent partners in Canada,” said Vicki Freed, senior vice president of Sales, Trade Support and Services, Royal Caribbean International. “This recognition re-affirms our ongoing and unwavering support of the travel agent community - what we call Loyal to You Always. Our commitment to building meaningful relationships through personal interaction with travel agents is one of the ways that sets Royal Caribbean apart.”

Royal Caribbean Chairman Richard Fain was awarded the Seatrade Personality of the Year 2012 award at a dinner held at London's Guildhall. 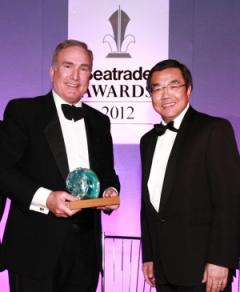 About 400 people witnessed the 24th annual Seatrade Awards, which is a shipping industry event that recognizes companies in the areas of safety at sea, clean shipping and innovation, as well as individuals that make significant contributions to the shipping industry.

Fain was praised for two achievements at Royal Caribbean: Overseeing the remarkable development in the hardware of the product, ‘not just size and volume but the transformation of the onboard experience incorporating elements that no one would have even dreamt about 25 years ago’; and secondly globalisation, both in deployment of cruise ships and sourcing of passengers. ‘Under his leader ship the company has moved ships to Asia, Middle East, South America and other parts of the world which are now all considered as major destinations and sources of passenger growth,’ he added.

Fain accepted the award and offered a few words of thanks for the honor, "I take this award with great humility. To receive this honor from Seatrade, handed to me by the IMO Secretary-General Koji Sekimizu, is very much a reminder of how important it is that each and every one of us in this great industry to which I have devoted my business career, maintains a high level of excellence."

"I am unusual in this room in that there are not many people who have crossed over from real shipping to cruising. When I first joined Royal Caribbean 90% of our ships sailed from Miami, within a few minutes reach of our offices, now more than 50% of our business is coming from outside the US."

Royal Caribbean was awarded the "Team of the Year" award in the 2012 Call Center Management Association Awards.  The award recognizes, " the excellence and first class performance of the guest and trade services call center team of the collective cruise line business."

Head of guest and trade services Michelle Johnson said: “This is the second year Royal Caribbean International, Celebrity Cruises and Azamara Club Cruises have entered the Call Centre Management Association Awards and the second year that we’ve walked away with one of the night’s top awards.

“It’s a great reflection of the hard work carried out by the whole team and a true recognition of our dedication and commitment to ensuring our guests are number one in everything we do.

“This award firmly places our business as one of the leading customer service organisations out there and I couldn’t be prouder of the team.”

Contributing to Royal Caribbean moving to the top of the list this year were a number of cruise incidents.

Also earning above average scores in brand equity are Celebrity Cruises and Norwegian Cruise Line, which round out the top three in the category. Most notably, Celebrity Cruises posted a significantly better brand equity score this year, perhaps driven by an uptick in quality, but more so by a stronger intention to use the cruise line than compared to the previous year.

"Consumers are savvy, and before they buy, want to feel 'linked and connected' to the brands they're purchasing," according to Joan Sinopoli, Senior Vice President of the Brand and Communications Consulting group at Harris interactive. "And, although services may be similar, preferred brands more than often exceed a customer's expectations, making them more than likely to recommend to others."