In:
History Sovereign of the Seas
By:
Matt Hochberg

Royal Caribbean's cruises are temporarily suspended around the world, so if we cannot go on a cruise today, how about a look back at cruising over 30 years ago! 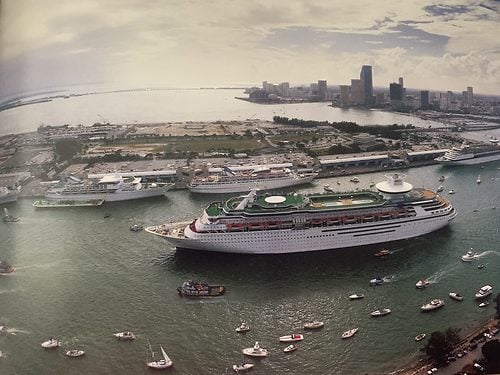 Pack your Calgary Winter Olympics sweater, refrain from discussing the Iran-Contra affair, and turn up the Kylie Minogue because we are headed back to 1998 onboard the Sovereign of the Seas!

Sovereign of the Seas is one of three Sovereign Class cruise ships, and was operated by Royal Caribbean beginning with her maiden voyage on January 16, 1988 from PortMiami. 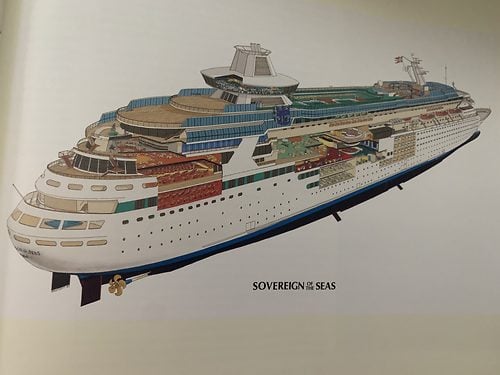 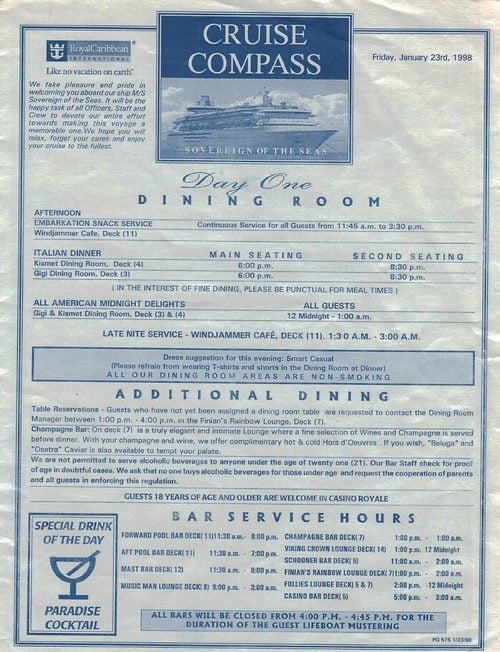 You migh tnotice that in addition to the option of Italian dinner in the Kismet and Gigi dining rooms, there is the much ballyhooed midnight buffet between midnight and 1am to enjoy. 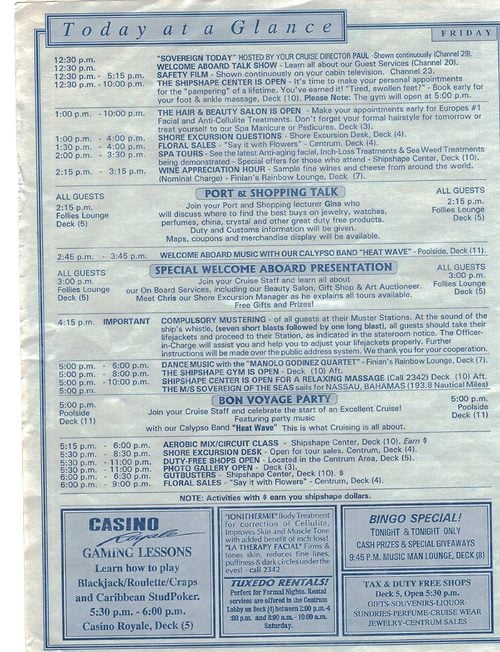 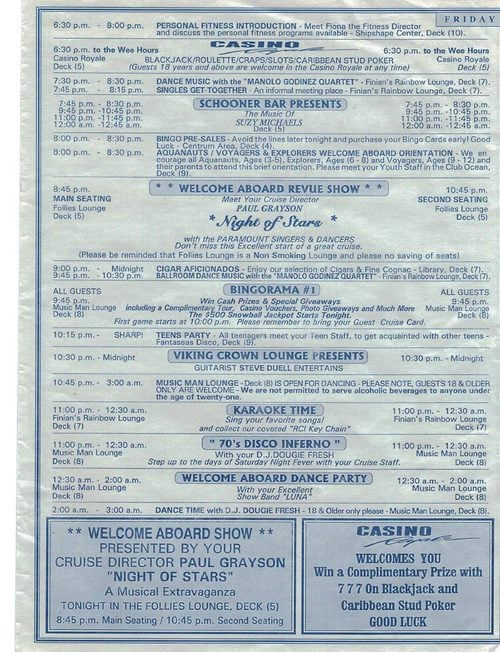 There is plenty to keep you busy on this 73,192 ton ship.  In addition to the five-deck Centrum, glass elevators and fountains in marble pools, you can choose between karaoke, 70's disco party, live music and bingorama! 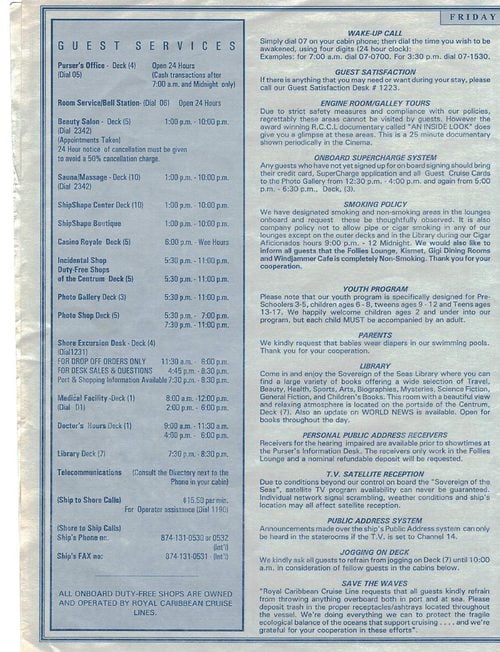 Sovereign of the Seas served in Royal Caribbean's fleet until November 2008 when she joined Pullmantur Cruises. 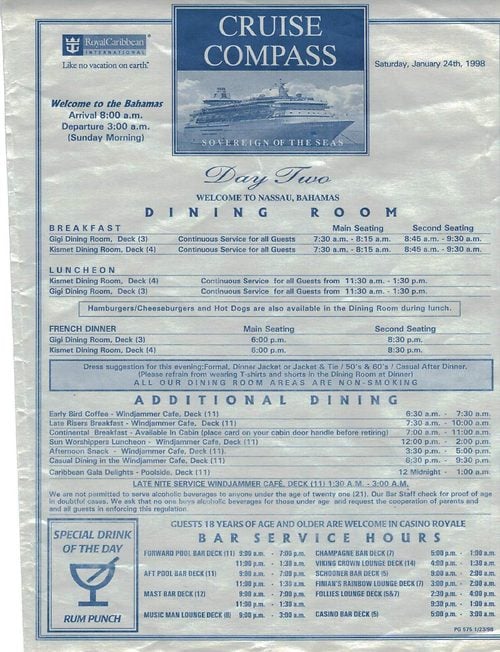 It is interesting to note that Sovereign of the Seas was the first Royal Caribbean ship to feature the now well-known suffix "of the Seas".

The name of the vessel was suggest and vehemently argued by Mortis Skaugen. "He literally shook the name into me," Richard Fain observes. There have been two prior ships called Sovereign of the Seas. The first, the price of King Charles I, was a towering, intricately carved Royal Navy warship of 1637. The second Sovereign was launched 200 years later from an American yard, a swift clipper ship built by Donald McKay. A handsome model of each vessel decorates the current ship's Schooner Bar.

Although on first hearing the name seemed overlong, it imparted exactly the right sense of royal occasion. Of course, the vessel's workaday generic would, predictably, be abbreviated to Sovereign; "___ of the Seas" would serve as an invaluable class-identifying suffix integrated into the names of both successors. 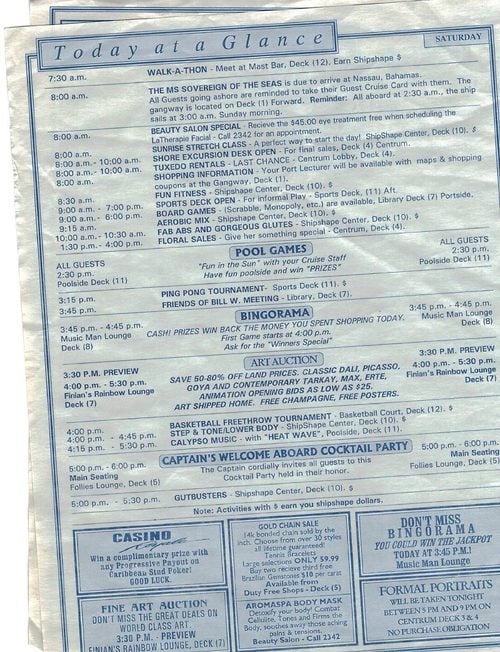 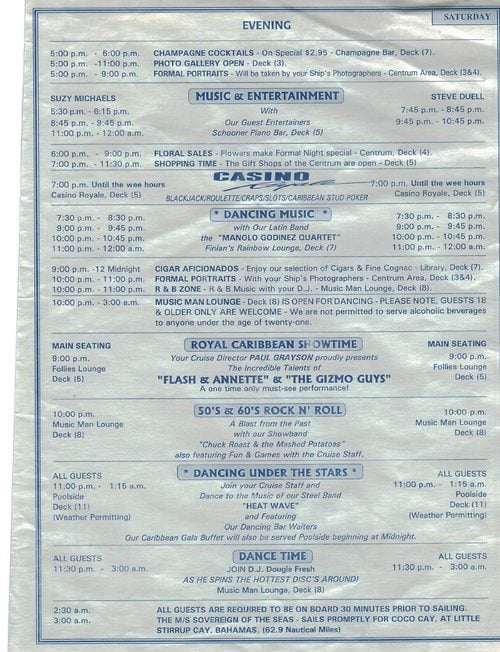 The first sea trials took place on September 5, 1987, which was a weekend.  Weekends were always selected for sea trials so that removing the vessel doe snot idle the workforce. 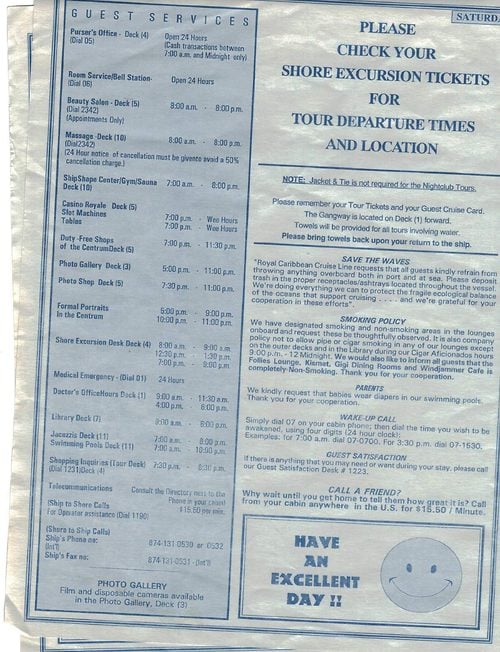 Sovereign of the Seas' naming ceremony was held in Miami on Friday, January 15.

Taittinger had created a huge new champagne bottle - the largest ever blown - specifically called a sovereign in honor of the ship - the largest of its kind ever built.

President and Mrs. Carter were onboard the ship, as the crowd, serenaded by a large orchestra, took their seats on the pier. It was a festive throng, caparisoned with hats, flowers, company ties, and always, multitudes of cameras.

Led by Chairman Eigil Abrahmsen, Mrs. Carter and the President emerged from the crew gangway and trod a red-carpeted path to the dignitaries' platform. The former First Lady had chosen a yellow suit, prettily matched by a chrysanthemum alee lining her right of way.

Of the many Carters on hand, one of the youngest had shared with Chairman Abrahmsen the ultimate grandmother's accolade. "This young man told me that he knew wat RCCL stands for," the chairman informed his audience. "It stands for Rosalynn Carter's Cruise Line!"

After the speeches and a solemn blessing, Mrs. Carter and the chairman climbed atop the launch platform.  The music stopped. A hush fell over the spectators.  In a clear voice, Rosalynn Carter offered the traditional benison, named the vessel and cut the launch cord. 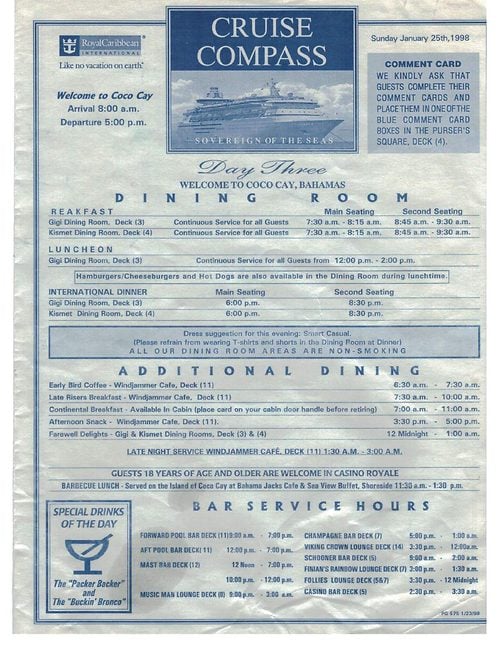 The maiden voyage of Sovereign of the Seas had only one glitch, while she was tied up in San Juan. That same evening, an inbound container vessel, Long Beach, grounded in the channel, bottling up Sovereign and keeping inboard cruise ships at sea.

Near noon, the captain of the port ordered tugs to stop trying to pull the grounded vessel off the sandbar, pushing her farther on instead in order to clear the channel.  Because of the delay, Sovereign missed her maiden St. Thomas call but - delightful compensation - scheduled a beach day at Labadee instead. 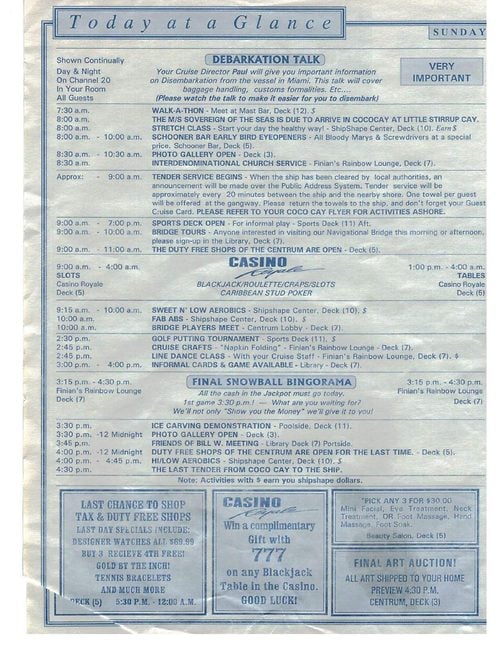 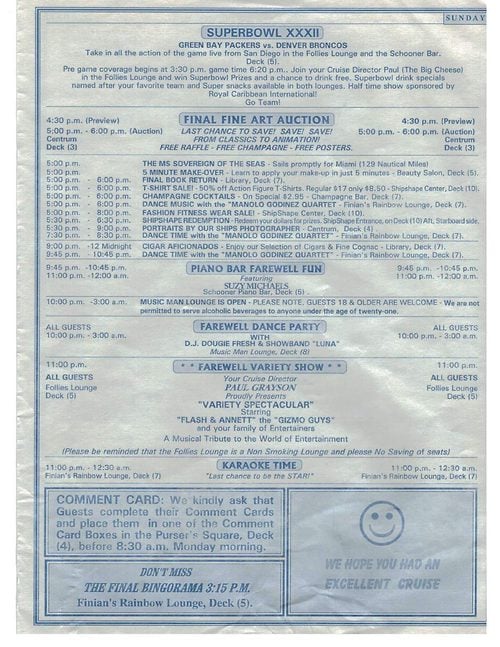 We timed this sailing quite well, because we will be able to watch Super Bowl XXXII between the Green Bay Packers and Denver Broncos. The rules of time travel strictly forbid placing bets to profit from the outcome of the game! 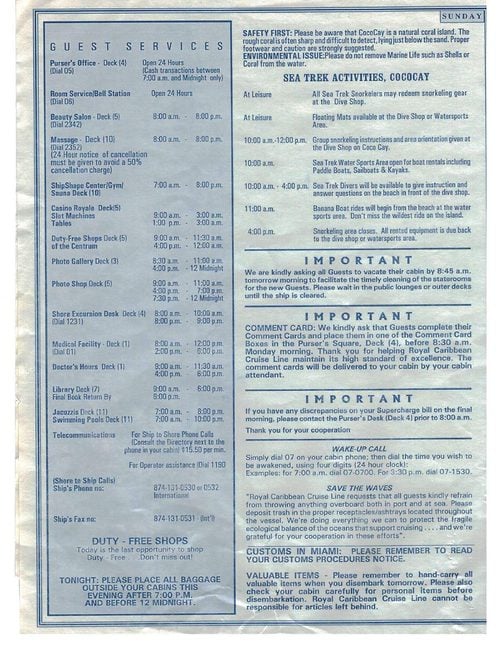 Unfortunately, our trip to the past must come to an end. I hope you enjoyed this retro look back at one of the most important ships in the history of Royal Caribbean!

What it was like to go on a Royal Caribbean cruise in the 1970s
Cruising has changed a lot over the years, but comparing a cruise today to what it was like fifty years ago is…