Royal Caribbean CEO Michael Bayley spoke to TTG about a variety of topics related to the future of Royal Caribbean, and touched upon a few topics that revealed a few hints of what is to come.

When questions about the features and innovations of sister cruise brand Celebrity Cruises, Michael Bayley confirmed that the cruise line is looking at bringing the Infinite Veranda idea over to Royal Caribbean, “Edge has a lot of innovation. We need time to assess what works well and what doesn’t but we will take on some elements and put them on the new class of ship – Icon class and potentially Oasis 5." 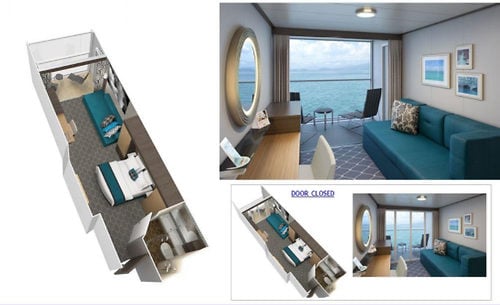 Bayley's comments follow up on guest surveys from last year that showed off a possible Infinite Veranda for Royal Caribbean.

Mr. Bayley also commented on the status of the cruise line's new smart phone app, saying the new tech rollout will be available on around 12 ships by the end of year and the rest by "early 2020". He added, “We’re looking at facial recognition and notifications based on the profile of the passenger.”

8 things you might not know about Royal Caribbean’s CEO
A successful business leader heading up Royal Caribbean International, Michael Bayley manages a cruise line with over…