What is the cheapest month for an Alaska cruise?

An Alaska cruise makes for an unforgettable vacation experience, but the cost of sailing to Alaska can vary greatly from month to month. While some cruisers may not put a price on such a once-in-a-lifetime vacation, others prefer to travel as budget-friendly as possible. While a cruise itinerary as beautiful as Alaska may seem like it would come with a shockingly-high price tag, visiting Alaska on a cruise can actually be surprisingly affordable. In fact, if you’re willing to be a little flexible with the time of the year you sail, itinerary, and stateroom selection, it’s possible to find Alaska cruise deals for as little as $85 per day, per person!

Let’s look at the cheapest month for an Alaska cruise and see just how much the cruise fare can change from month to month. 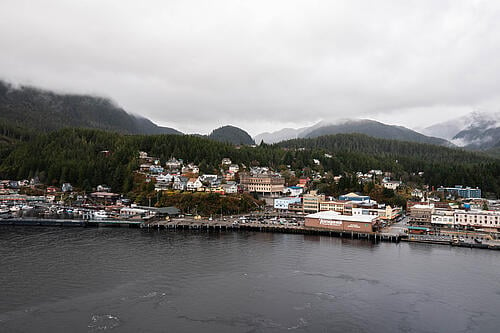 The Alaska cruise season typically runs from late April to late September, and the cheapest months to cruise to Alaska are during the shoulder season months of April, May, and September.

Prices tend to be cheaper during shoulder season due to chillier temperatures and the fact that school is still in session. Weather can also be more unpredictable at this time, although, to be fair, that can be said about nearly every day in Alaska!

Read more: How to cruise on the cheap

Regardless, if booking the cheapest Alaska cruise is important to you, a good starting point is to look at fares during the months of April, May, and September. Let’s take a look at a few examples of an Alaska cruise fare for 2 adults in the shoulder season compared to the peak summer months of June, July, and August. 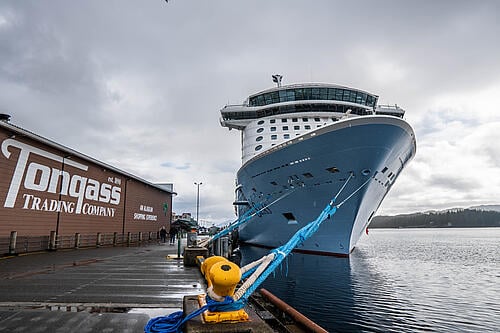 7-night Alaska Glacier Cruise on Ovation of the Seas

Price of 2 adults in a balcony stateroom, including taxes and fees:

7-night Alaska Glacier Experience on Enchantment of the Seas

Price of 2 adults in an interior stateroom, including taxes and fees:

7-night Alaska Glacier Cruise on Quantum of the Seas

Price of 2 adults in a 1 bedroom Grand Suite, including taxes and fees: 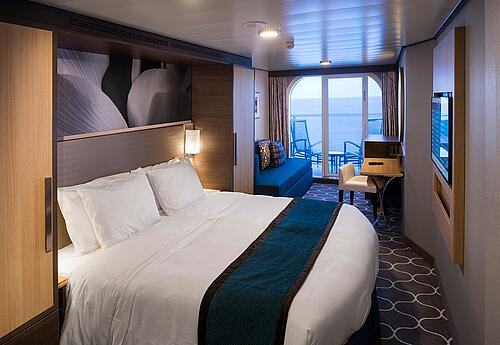 It’s possible to have savings upwards of $1000 by sailing during shoulder season as opposed to mid-summer. These savings can easily be put toward Alaska shore excursions like whale watching, kayaking, and even helicopter tours!

Read more: When should I book my Alaska shore excursion?

Alternatively, you can use these savings and book a higher category stateroom. If a balcony room is out of budget for a cruise in July, it might be doable in April, May, or September.

Simply put, by cruising in shoulder season, you can get more bang for your buck on an Alaska cruise.

Benefits of booking an Alaska cruise during the cheapest months 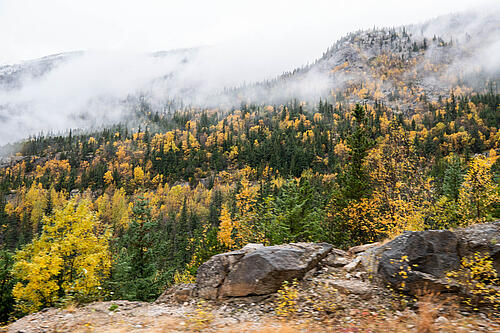 Booking an Alaska cruise during shoulder season can lead to benefits beyond a cheaper cruise fare.

Cruising to Alaska in the early season of late April and May can come with a lower chance of rain than late summer and fall. In addition, daylight hours are from around 4AM to 10PM in May, giving visitors plenty of time to enjoy Alaska’s attractions. Temperatures can be quite comfortable as summer approaches, with highs in the 60s common in mid to late-May.

Read more: What it’s like to go on an Alaska cruise in the early season

Cruising in September brings the start of fall foliage and snow capped mountain peaks. You may also have the chance to spot the northern lights in late September, although this is not guaranteed.

Drawbacks of booking an Alaska cruise during the cheapest months 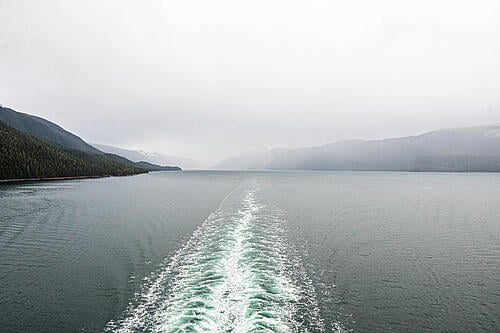 October is the rainiest month of the year in southeast Alaska, with September coming in second. This can lead to high chances of cloud coverage and precipitation as well as colder temperatures. It may also lead to rougher seas when outside of the Inside Passage and a higher chance of ports being changed at the last minute.

Read more: What it’s like to go on an Alaska cruise at the end of the season 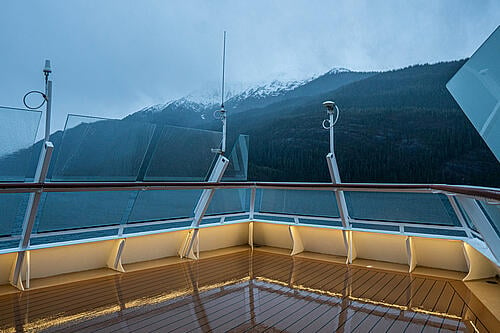 If you are planning an Alaska cruise with kids, the shoulder season falls during the school calendar. Cruising in April, May, or September may require taking kids out of school for a week, which can lead to extra logistics with making up homework and tests.

Likewise, if you are interested in booking an Alaska Cruise Tour before or after your cruise, it’s important to note that visits to Denali National Park & Reserve are limited to when the park is open to visitors. The earliest and latest Alaska cruises of the season will likely not offer a Cruise Tour option. 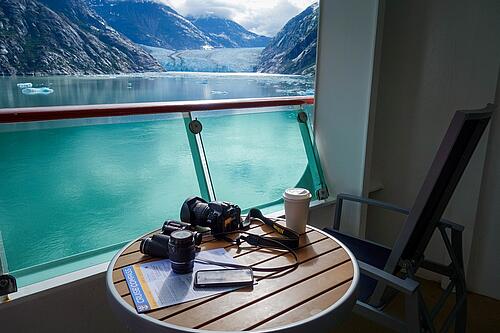 The cheapest Alaska cruises tend to be in the months of May and September, but booking an open-jaw Alaska cruise can lead to even bigger savings not only in the shoulder season, but during the peak summer months as well.

One-way cruises exist primarily to serve Royal Caribbean’s land-based Cruise Tours, which are multi-day land tours before or after an Alaska cruise. However, one-way cruises are open to all passengers regardless of whether or not they booked a Cruise Tour. 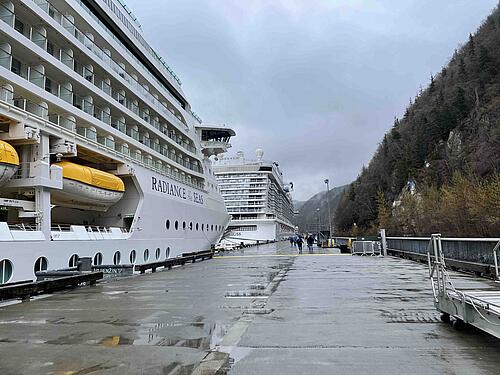 Let’s compare a few one-way cruises to roundtrip sailings and see how much prices can differ. This pricing is for a guaranteed interior cabin for 2 adults during the peak summer season, including taxes and fees.

Roundtrip 7-night Alaska Glacier Cruise on Quantum of the Seas

As you can see, it’s possible to find fantastic cruise fares on one-way sailings if you want to sail during the warmest months of the year in Alaska. 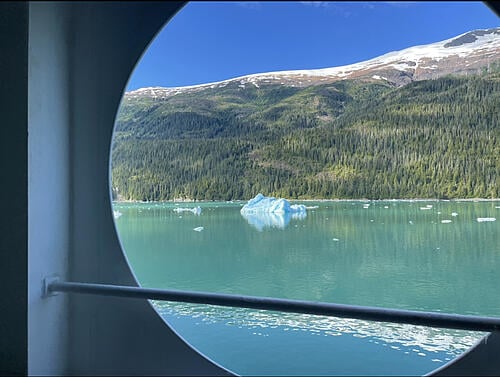 Why one-way cruises are cheaper

Cheaper prices can be found on open-jaw Alaska cruises due to the travel logistics needed on a one-way cruise, including flying into one city and out of another, figuring out transportation from Seward to the Anchorage airport, and being unable to drive to port.

If you don’t mind the extra logistics, open-jaw sailings can lead to great savings and the opportunity to visit Alaska more in-depth. Because there is less travel time required as opposed to a roundtrip cruise, open-jaw sailings often include more port stops and fewer sea days.

As a plus, you can also visit Alaska’s inland destinations such as Talkeetna and Denali National Park & Reserve by starting or ending your cruise in Seward.

Is it worth it to cruise to Alaska in the shoulder season? 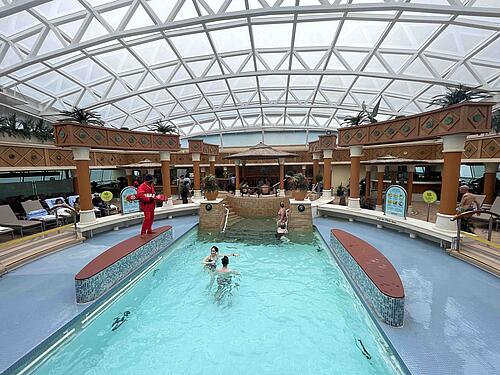 While prices may be cheaper in May and September compared to June, July, and August, it’s important to consider the pros and cons of each month before selecting a sail date.

If an Alaska cruise is a once-in-a-lifetime opportunity for you and you want the warmest temperatures and most daylight, booking the cheapest fare in, say, late September, may lead to disappointment.

Read more: Why you shouldn’t book the cheapest cruise you can find

Temperatures on an Alaska can actually be quite comfortable in late spring, so while it’s of course recommended to pack a jacket, hat, and gloves, you may be surprised with sunny skies and somewhat warm weather.

Regardless of the month you book an Alaska cruise, it’s important to remain flexible. Temperature, precipitation, port changes, and unexpected mishaps can happen at any time of year in Alaska, so keeping an open mind will help you have the best experience possible.

Local’s guide of what to do in Juneau, Alaska
Alaska's state capital is chock full of adventure. As one of the state's largest cruise and airport hubs, Juneau has…

Top 10 things to do in Skagway, Alaska
The small town of Skagway is a popular port on an Alaska cruise. Despite the town’s small size and population of just 1…