The question of if you’ll have to wear a face mask before and after your cruise in the terminal is officially answered. In an update to guests, Royal Caribbean updated it’s health protocols by indicating masks are now optional while in cruise terminals.

Following the overturning of a federal mandate for masks in transportation hubs earlier this week, the question remained if masks would be required since there wasn’t any announcements by the cruise lines initially.

An email was sent to guests with the new policy, "Due to recent changes in mask guidance, we’ve updated our mask policy, effective immediately, for all of our sailings where we've announced protocols, excluding Singapore departures."

"In our terminals, masks are optional unless required by local regulation. Some destinations we visit may require masks." 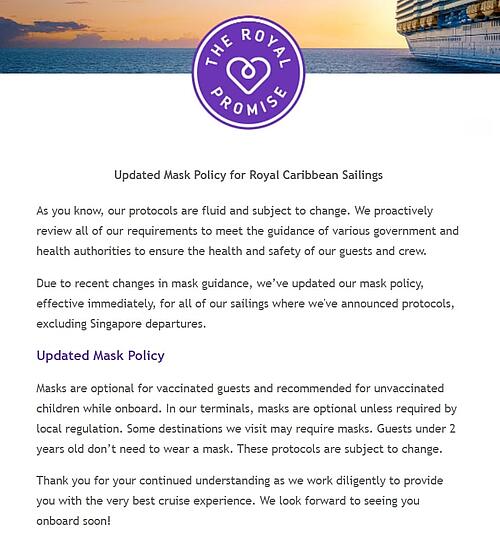 Royal Caribbean also added that these protocols are subject to change. The announcement comes on the heels of the United States Coast Guard announcing it would not enforce mask mandates.

Similar to how the Transportation Security Administration (TSA) enforced the mask mandate for air travel, the Coast Guard was responsible for doing the same for the cruise industry. 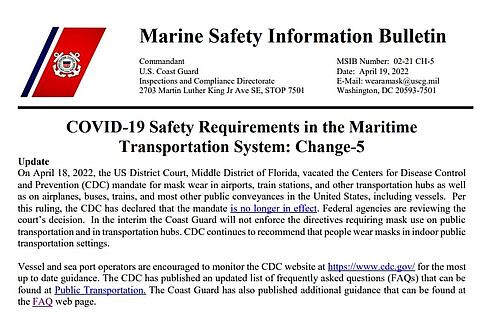 Carnival says masks are highly recommended during the embarkation and debarkation process.

'The industry has stepped up': CDC Director says Conditional Sailing Order will not be renewed
It looks like the U.S. Centers for Disease Control and Prevention (CDC) will follow through on its promise to allow the…