In:
History Song of Norway
By:
Matt Hochberg

One of the truly incredible engineering feats is when a cruise line cuts a cruise ship in half, adds a new section in the middle, and welds the halves back together. 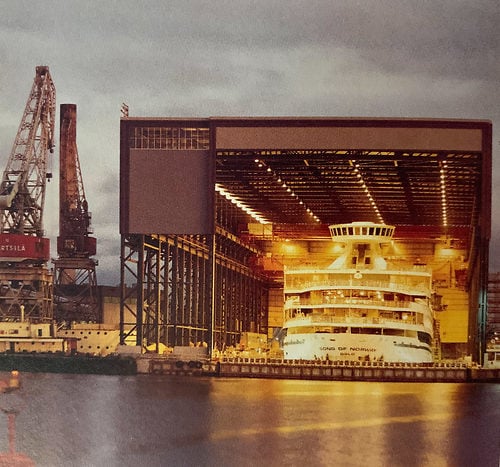 While not a common practice anymore, Royal Caribbean endeavored to lengthen its first cruise ship, Song of Norway, in 1977.

The story of lengthening Song of Norway comes from the out-of-print book Under Crown and Anchor.

If you are wondering why any cruise line would stretch a cruise ship, then you must understand the term, "economy of scale".

The quintessential economy for all cruise lines is a watchword chiseled in stone, an elementary shipboard truism identified as economy of scale.

In its simplest terms, economy of scale is a principle that argues for reducing the number of crew per passenger to a comprehensive minimum. Imagine, for a moment, a pool of 1,500 Royal Caribbean passengers waiting eagerly at Dodge Island to embark. They can be divided in half so that two groups of 750 each board Song of Norway and Nordic Prince.

Now count the crewmen who must look after those 1,500 passengers on two separate ships. Each vessel requires a master, a staff captain, a chief engineer, a cruise director and so on, all the way down the operational hierarchy.

Suppose instead, we embark those 1,500 on board a single ship. The manning requirements per passengers are reduced dramatically. Only one master, one staff captain, one chief engineer, one cruise director and so on are required to look after the same number of passengers on the larger vessel.

This is economy of scale at work. Such resounding financial advantage encourages—nay, mandates! the construction of larger, more commodious vessels. Medium-size cruise ships, yesterday's typical 20,000-Conners accommodating 600 passengers, are now endangered species. It is the megaships, vessels with passenger loads in the thousands, that make economic sense today.

But economy of scale has an inevitable flip side: The market must always continue to expand. Mammoth ships require continuous large passenger loads. In fact, the relentlessly increasing tonnage of today's newbuilding exactly parallels the situation on the North Atlantic a century ago when increasingly bigger ocean liners were launched in response to an apparently unending demand for emigrant berths. Giant ships the size of Olympic, Aquitania, Imperator, France and Rotterdam were rushed into service, towering, multiclassed hulls designed with a broad-based pyramidal load factor in mind. While several hundred first- and second-class passengers were comfortably accommodated above, down below, humble but profitable emigrants were jammed into high-density berthing compartments.

In the fall of 1977, Royal Caribbean decided to stretch Song of Norway.

She would return to the shipyard that built her to have a specially built midsection added into the middle of her hull, increasing the overall length from 550 to 635 feet, while increasing passenger capacity by 328. 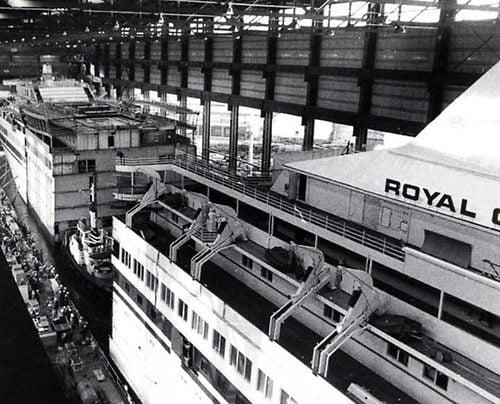 Wärtsilä estimated the cost for the 8-year old ship to be $12 million, only $1.5 million less than the original cost of the ship!

Work began on stretching the ship in December 1977, with completion scheduled for slightly less than a year later.

The work took place within a shipyard fixture new since Song of Norway's launch, a huge gray-green shed called the Building Hail, completed in 1978. At the dry dock's end, a towering assemblage of prefabricated sections was welded together until there arose a self-sustaining section of hull, looking from afar like a giant rusted Rubic's Cube.

The conversion work was, in effect, a miniature ship, with neither bow nor stern but ragged transom ends. Each side boasted Song of Norway's familiar fenestration, spray-painted white. Only the company's customary blue racing stripe was missing; that would await the subsequent attachment of stout longitudinal two-inch steel straps that, above and below the waterline, would sustain the rejoined hull like tape around a parcel. 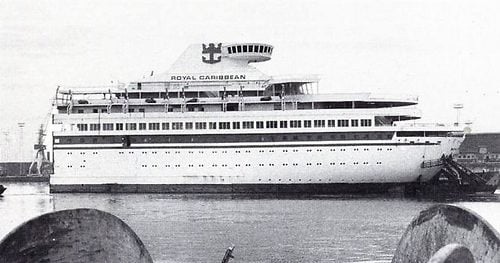 At the midsection's raw open ends, which would be married to the exposed faces of Song of Norway halves, plywood blockades were erected to protect interior corridors from the weather. On the lowest decks, chest-high bulkheads kept water out of open-ended provision rooms at the after end. In effect, the configuration of that surreal vertical slice of ship com-prised a logistically complete passenger-ship cross section: From top to bottom, there was an out-thrust bulge of sun walk enclosing a new swimming pool, some upper deck cabins, two-thirds of an enlarged dining room and a shop extension on Restaurant Deck, standard cabins below that, crew cabins underneath and, at the very bottom, provision rooms and then layers of ballast and freshwater tanks.

On August 19, 1977, the last passengers were offloaded in PortMiami and preparations began for the crossing to Helsinki.

Among the Finnish shipyard workers that boarded the ship was Mogens Hammer, the ship's interior designer, to oversee the dismantling and storing of all works of art.

Among other preparatory work, the passenger galley was stripped down to steel; all crew and Finnish workers ate on D Deck forward, in the crew mess. Additionally, carpeting, paneling and ceiling in the way of the proposed cut were stripped, and the cut mark chalked on the naked steel.

As the vessel tied up at Wärtsilä's fitting-out basin on September 1, just outside the Building Hall, workers with oxyacetylene torches initiated the monumental cut, following chalk line to waterline. They had to slice not only through the outer hull and superstructure but through every deck and interior wall as well. 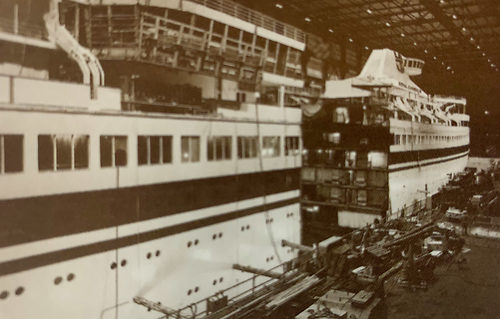 Workers had welded stout supporting pontoons beneath both the counter and bows while Song of Norway was still afloat. Once the dock was drained, the vessel and her cumbersome pontoon extensions settled down onto keel blocks. Only then could the final separation be completed. Crouched awkward-ly in the mucky, noisome crawl space beneath the hull, cutting teams finished chair gargantuan slice beneath the double bottom, while coworkers above and inside concentrated on the tank tops. By the end of the day, suddenly and soundlessly, Song of Norway had been separated into two parts.

Putting her back together

The new midsection, parked nearby, was prodded inside and snugged with winches as tightly as possible aft of the immobilized bow. The ultimate reentry was the stern section's; once inside the Building Hall, it was positioned firmly up against the midsection's after end. 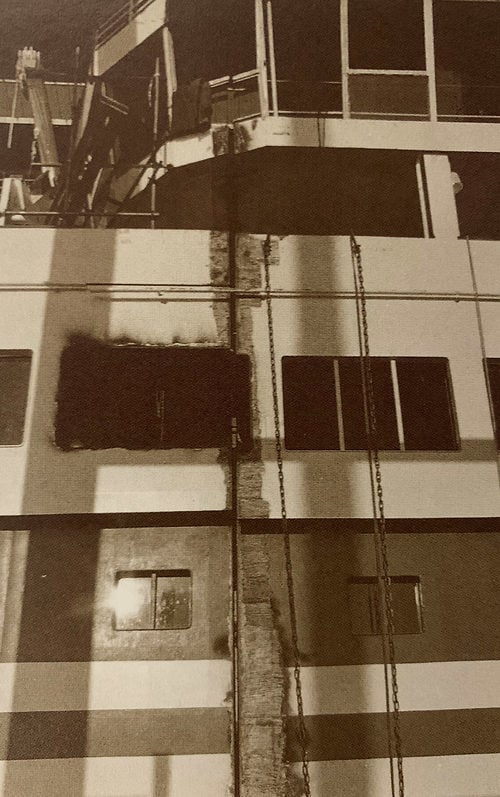 Although one cut had separated Song of Norway, two joints would be required to make her whole again. And rejoining, in the shipyard as in life, is more demanding. Compounding the difficulty, each section floated at maddeningly different depths: The stern, containing the engines, rode lowest. So Wärtsilä engineers had to play a patient juggling game, with ballast tanks and winches, scrupulously aligning their trio of disparate floating craft into one seamless, horizontally aligned whole. The stern and midsection were joined first, then finally the bow section was winched aft to complete that historic reassembly.

Once the bow was tightly in place, there was more fine-tuning inside. Throughout the hull, bridging and shrinking gaps between adjacent decks, powerful hydraulic pull jacks drew each reluctant deck level to its neighbor, close enough for a welding bead to seal them together forever. After all three sections had been completely united, stout longitudinal steel strapping was welded along both flanks and to either side of the keel, binding those disparate thirds irrevocably into one. Inside the hull, electrical junction boxes were hooked up, illuminating the new section's formerly gloomy labyrinths. Ancillary improvements were added to Song of Norway. To serve her longer hull, a second bow thruster was installed paralleling the original.

The new Song of Norway

By November 24, Song of Norway had completed her sea trials and been handed over to Royal Caribbean.

Following a brief stop in Rotterdam for a press tour, she began her crossing back to Miami.

As they cleared the channel and the first Atlantic swells were encountered, those on the bridge could tell that their lengthened vessel rode well: The longer hull negotiated the oncoming parade of waves with an easier pitch. But best of all, after a few days at sea, positive engineering feedback came from below. Chief Engineer Johan Tranvaag reported elatedly to Captain Andreassen that Song of Norway's fuel consumption had increased only marginally. These were indeed invaluable technological and navigational dividends realized from a pioneering engineering investment.

Song of Norway resumed her normal cruising schedule on Saturday, December 16, having been out of service slightly less than four months. She sailed out of Miami with her passenger capacity increased by a remarkable forty-four percent.