Meet the Oasis of the Seas that never was

When Royal Caribbean designs its cruise ships, they consider a lot of ideas and possibilities.  Any company that designs a product or service will go through many iterations or concepts before settling on the final design.

This week, we take a look at an early design for Royal Caribbean's Oasis class cruise ships that incorporates many concepts that never made it to the final cut.

Boston-based Wilson Butler Architects was a key creative force behind many of the features on what would become Oasis of the Seas. Wilson Butler has worked with Royal Caribbean since 1997, and responsible for the main theater designs for Royal Caribbean’s Voyager-class ships and theaters on its Radiance-class of ships, including the 900-seat Aurora Theater on the Radiance of the Seas, and the 915–seat Pacifica Theater on the Brilliance of the Seas.

A few years before Oasis of the Seas would debut, the firm had an idea for what was then referred to as Project Genesis.  It was an early design for the ship meant to introduce the neighborhood concept.

Wilson Butler proposed the design, which has a number of areas offering different attractions.  Some of these ideas would make the final cut (albeit in different forms), while others never made it.

"Studio Sea" and "The Midway" are two ideas that would be a part of the eventual final ship design.  Studio Sea would become the AquaTheater, while The Midway would be renamed The Boardwalk.  Interestingly, "The Midway" featured additional features not seen in the Boardwalk, such as a Lighthouse and Aquarium Light.

Arguably the most intriguing idea was "The Ocean Pass," which appears to have a blue whale at the top and a number of decks designed to look like an under the sea area.

The two areas of "Market Pier" and "The Coral Strand" are also interesting places, with each offering dining choices, separated by something called "The Coral Arch". 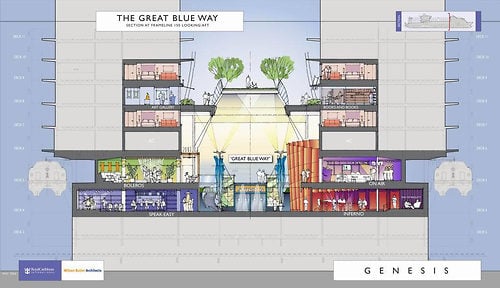 Another early design by Wilson Butler had an area known as "Great Blue Way," which sounds like a play on words for Broadway's nickname of The Great White Way.

The design has two lounge ideas not seen on Oasis of the Seas today.  The Speak-Easy is likely what we now know as Jazz on Four, and Inferno sounds like a nightclub.

Which design element do you wish Royal Caribbean would put on a ship? Share your thoughts in the comments below!

Take a look back to a Sovereign of the Seas cruise in 1998
Royal Caribbean's cruises are temporarily suspended around the world, so if we cannot go on a cruise today, how about a…