There are a lot of cruise fans who are stuck at home and dreaming of the day they can get back onboard a Royal Caribbean cruise, so former Cruise Director Abe Hughes decided to offer a virtual cruise for them. 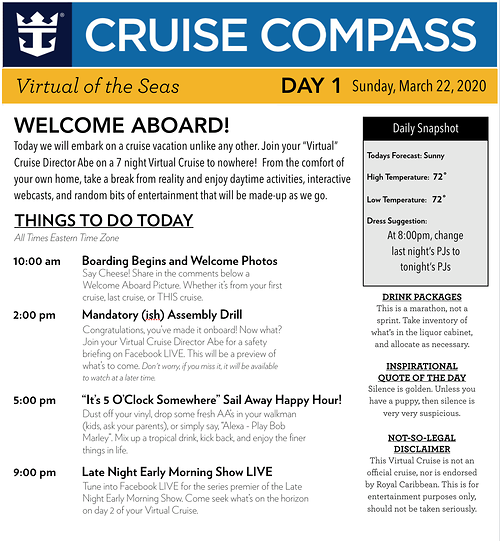 Dubbed "Virtual of the Seas", Hughes crafted a daily Cruise Compass to provide his friends at home activities that would not only keep them occupied, but were similar to the sort of activities you would find on a cruise.

Hughes is no longer a Cruise Director, although he does still work for Royal Caribbean in their sales department supporting travel agents near his home in the midwest.

Each day, there was a new Cruise Compass for anyone interested to read that had activities they could do at home, as well as collaborate online.  This included Sudoku, trivia, napkin folding and more.

Each evening, Mr. Hughes hosted a Facebook Live session of his morning show recording that he used to do onboard the ship.

The idea proved so popular, that Royal Caribbean announced Virtual of the Seas will sail again, with a 4-night "cruise" that begins on March 30.

All aboard! We’re craving a change of scenery and are embarking on a virtual cruise. Join Abe Hughes starting tomorrow as he takes over for the week. Because when you can’t actually travel the next best thing is to go virtual from the comfort of your couch. #VirtualoftheSeas pic.twitter.com/t6Q6utGxPY

You can follow Abe Hughes on his Facebook page and join in on the second sailing of Virtual of the Seas!

How to make towel animals just like on a Royal Caribbean ship
Royal Caribbean cruises are known for a variety of amazing and innovative things to do onboard, and among the many…

Bernie Sanders inauguration meme reaches cruise ships too
You know a meme has hit critical mass when cruise ships get involved.  Unless you have been off the internet since…

Free Royal Caribbean lock screen backgrounds
If you are anything like me, you look for any opportunity to sneak in a little cruise fun into your life, so here is…

6 Royal Caribbean trademarks that sound like they could be really cool things
Royal Caribbean has trademarked a lot of interesting names over the last couple of years, and perhaps these could be a…