In:
Smart phone app Adventure of the Seas
By:
Matt Hochberg

Royal Caribbean has released version 1.10.0 of its new smart phone app, which adds support to Adventure of the Seas. 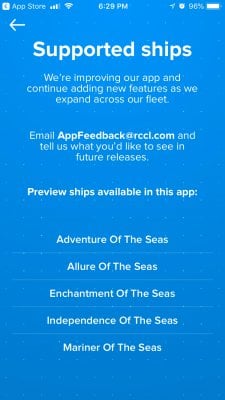 The new version does not list Adventure as a supported ship in the app store, but opening the app shows both ships on the list.  Some blog readers have reported seeing Brilliance of the Seas and Majesty of the Seas supported in their apps, but we have not been able to see that on our devices.

Independence and Mariner of the Seas were recently added as well.

Royal Caribbean adds validation to Covid-19 vaccine card photo uploads in app
The Royal Caribbean app is getting updates all the time, and some cruisers have noticed a change to the option to…