Recently, Royal Caribbean soft launched their new Hyperlink Program onboard select vessels, and after reading some mixed reviews, I decided to see what the activities were all about while sailing on Symphony of the Seas.

Hyperlink targets guests between the ages of 18-25 and aims to bridge the gap between the Fuel teen club, which is limited to guests 12-17, and other more common adult activities where drinking is more present.

Since I'm only 23, I'm within the age range for this program, so I attended at least one Hyperlink activity everyday while on my cruise to see what I thought.

I wanted to check out the activities and share with all of you my opinions on how well it all worked. On the very first night, there were two Hyperlink activities: a social gathering near the Solarium Bar, followed by a private table event at the Attic.

Since I was on my first solo cruise, I was looking forward to the opportunity to get to know other guests around my age.

When I arrived, the Hyperlink "promoter," who was dressed up in a suit and tie, greeted me and shook my hand. A small speaker playing some of today's hits provided good background noise, and everyone entered a raffle where names would be pulled at the very last event to win "a free cruise or keychain, but probably a keychain." 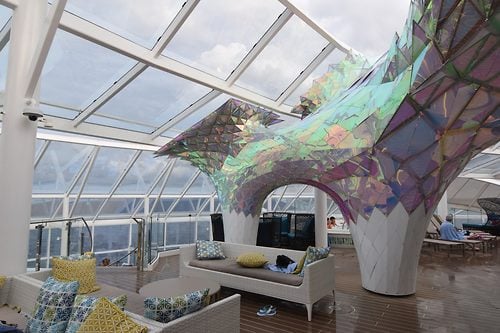 There were about ten other attendees present already, so everyone restated their names and where they were from. This kept occurring throughout the event whenever other people would arrive.

I did notice, however, that while we all said our ages when introducing ourselves, they were never checked by the promoter. In theory, someone who looks like they are between the ages of 18 and 25 could have shown up without question.

Most of the guests at the social event were under 21, and those who were over the age of 21 arrived drink in hand and did not stay for long, especially those who were looking forward to continuing the gathering in the Attic.

I ended up meeting a nice guy from Colorado who became my buddy for the week. In fact, we've been in contact since the cruise already!

A large group of attendees stayed in the Solarium rather than heading down to the club event, myself included. It was nice to get to know everyone instead of heading to a venue where conversation would be minimal.

Throughout the week, there was at least one Hyperlink event per day, all happening after 10:30pm.

The second night's activity was international beer trivia in On Air. It was supposed to begin at 11:30pm; however, it didn't start until closer to 11:45, and the same promoter was the host of the event.

The room was packed, but once again, no ages were checked. The parents of the friend I made the night prior even stopped in for a little bit.

Additionally, everyone came in groups. If you showed up solo, I think it would've been hard to find a team to play with. There wasn't any real time to talk with others.

I really didn't find this theme suitable for guests 18-20. Even though I am 23, I am not a beer drinker. In fact, I avoid it at all costs.

Personally, I think it should have been something more universal, like music or movie trivia.

In total, the event lasted twenty minutes, as it ended at 12:05am. I'm surprised at how well my new friend and I did; we got eight out of twelve correct, albeit many (if not most) were just great guesses. The next night's event took place in the alcoves located in the forward of the ship off of the running track on deck five.

I believe that both cup pong and flip cup were supposed to be played, but because of how popular the event was, there was barely enough time to let everyone play cup pong.

The same friend and I made accompanied me to all the Hyperlink events the rest of the week, which made them more enjoyable, as there weren't any more "get to know each other" opportunities; everyone arrived in pairs or groups. At this point, I noticed a recurring theme: ages were not going to be checked. The promoter assigned teams without so much as asking a single person their age.

The energy at this event was high: loud music was playing; people were screaming and yelling; and you could tell some had a few drinks prior to coming.

Thus far, the events seemed to be more targeted towards passengers ages 21-25, rather than 18-25, as I felt like this event was not appropriate for the ship to be promoting for those under 21. It was on this cruise I discovered how much I enjoy watching people sing karaoke. Prior to this trip, I usually skipped the karaoke events, as they were often very crowded, and it was difficult to find seating if you didn't arrive ahead of time.

I was looking forward to the Hyperlink karaoke night because I figured it would be a smaller, more "exclusive" event!

It turns out that they merged it with "adult" karaoke; however, ages were not checked at all. It was truly just another karaoke night with the only difference being that the same Hyperlink promoter was the host.

Hyperlink was never even mentioned, and before every song, the promoter would say this was "for you, for me, [and] for everybody!"

That being said, I really enjoyed myself! The promoter's energy carried the event, as it was evident that he was enjoying himself.

He was often seen dancing off to the side, and at one point, he even ran across the stage throwing tissues! It was quite entertaining. Just like the previous night, the event at Studio B's "RED" nightclub was merged with the overarching event. Technically, though, it was just a "meet up" that was scheduled to last thirty minutes. This time,  I never even saw the promoter. If he was there, he was buried in the sea of people on the dance floor.

About fifteen minutes before it began, there was already a decent sized line. And because this was in a nightclub, all SeaPasses were scanned, so everyone was over 18.

It was nearly impossible to find anyone else who had been to other Hyperlink activities because of how crowded it was.

Right at the beginning of the dance floor was a bar, and nearly every attendee visited it or carried in another drink. Game night had so much potential! It was slated to be held in the Card Room on deck 14, but when I arrived there were only a few people there; the promoter was nowhere to be found.

A good age range showed up, too; two 23-year-olds, two 19-year-olds, and one 18-year-old, including myself and friend, were there and ready to play some card games.

This event would have thrived with some enforcement, like setting up multiple game stations that were ready when people arrived.

In reality, most people left within ten or fifteen minutes. The last activity was another meet up with a DJ, but this one was located in Dazzles.

The overall age of attendees was younger than the RED nightclub event, but that's probably because it was 12:00am, and everyone had to be off the ship in roughly nine hours.

It was similar to the last clubbing experience, down to the fact that there was no promoter to be found, even though there was supposedly a raffle.

Now, this could have actually happened, but since it was the last night and I had an early morning, I did not stay longer than fifteen minutes.

The Hyperlink Program is a great idea, but it is lacking in execution.

None of these activities truly seemed to bridge the gap for those who were between 18 and 20. Rather, they just encouraged drinking behavior (i.e., beer trivia, cup pong, nightclub events).

Plus, I think that if events are going to be targeted towards a specific age group, there needs to be some method verification, and there should be staff present at every Hyperlink advertised activity.

Perhaps, even, Royal Caribbean should focus solely on those 18 to 20, as anyone over 21 can partake in all events throughout the cruise ship and most likely are using the time to drink.

Not that I am a sports girl, but I know that exclusive sporting events would've been widely popular, but they were not offered on my sailing.

All events that were offered were late at night, and sports could be a way to provide entertainment during the day as well-- I found myself struggling to stay awake every single night and would have loved a few events during the day.

I think, too, that they should have more opportunities for social interaction and meeting new people throughout the week.

Like I said earlier, I am a huge fan of the idea of Hyperlink; I just hope that Royal Caribbean uses feedback from guests to continue improving it!

What is Friends of Bill W. on a cruise?
Who is Bill W. and… why does he have so many friends? When browsing the Cruise Compass…