In:
Odyssey of the Seas Live Blog
By:
Matt Hochberg

While the typical Royal Caribbean television commercial shows off all the amazing things you can do on a cruise ship, my favorite activity on a cruise is doing a lot of nothing. Today is our first sea day and we decided not to set an alarm. That meant we ended up sleeping in a lot more than I thought. The curtains on Odyssey do a great job of blocking out the sun.

When we did get up, we decided to head to breakfast at the Solarium Bistro. 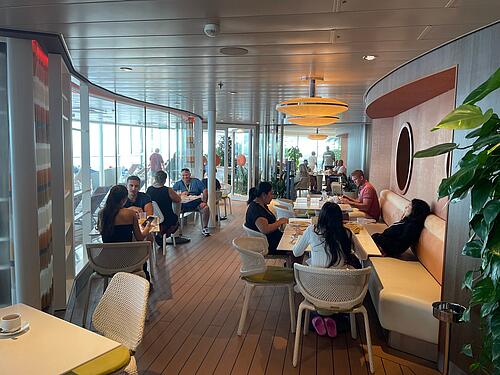 Solarium Bistro is one of my favorite tips about eating on Odyssey of the Seas because it's a lesser-known place for breakfast. It's less crowded than the Windjammer and it has an omelette station. 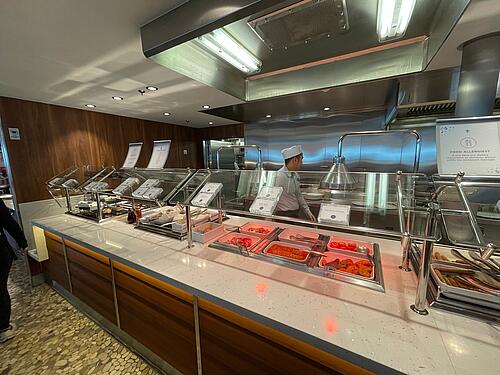 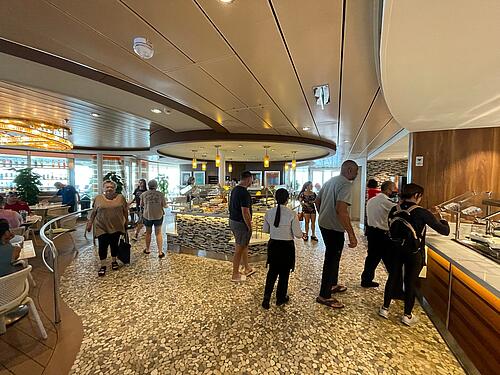 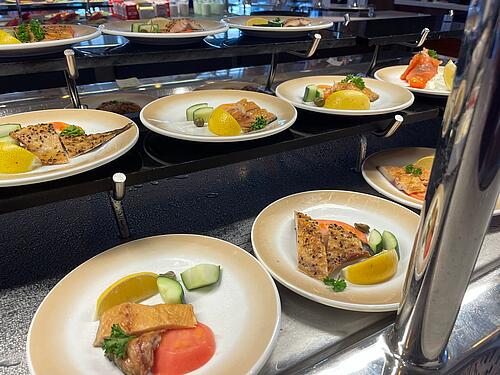 The best part of the omelette station is they deliver the omelette when its ready back to your table instead of you waiting for it. 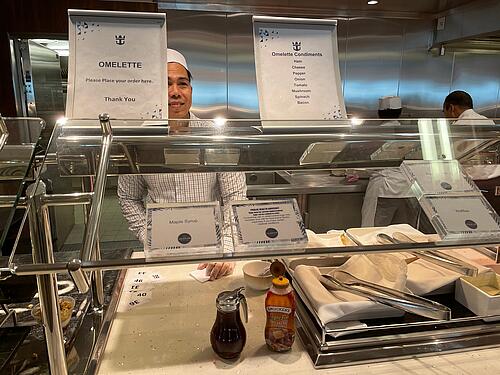 After breakfast, I went out to the pool deck to enjoy some fresh air. I think a lot of other people had slept in because things were not too busy by mid-morning. 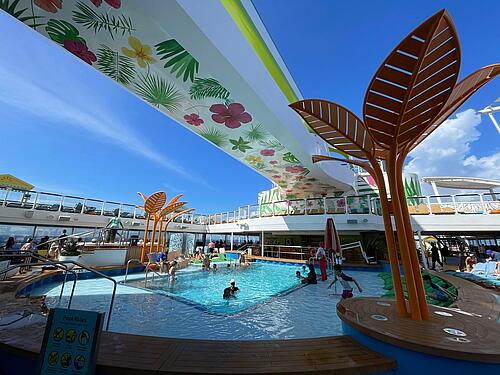 Later we went down to the main dining room to book a time for dinner.  While we have the unlimited dining package for this cruise, I want to eat in the dining room on Thanksgiving so I can get the traditional Thanksgiving menu offering.

I had no issue getting a reservation for 6:45 on Thanksgiving, which I was pleasantly surprised to get because I thought it would be close to booked up.

By now I needed coffee, so we went to Cafe @ Two70 to get a macchiato (included with my drink package). 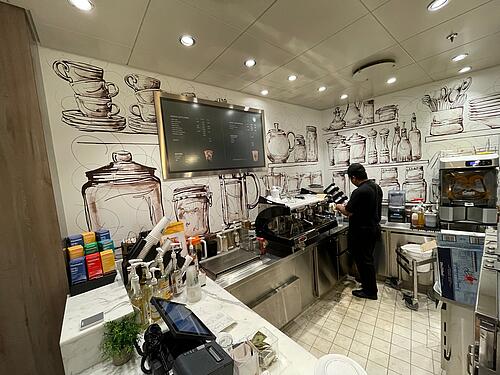 I then sipped the coffee in Two70 with a great view of the aft. 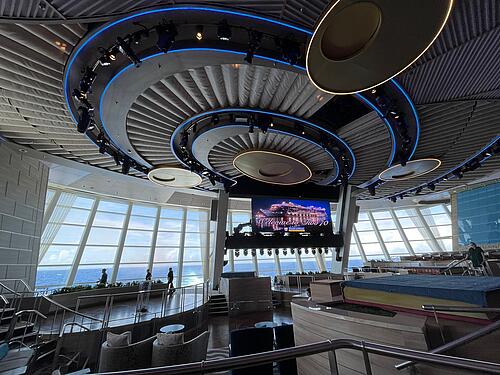 We spent a fair amount of time in Two70 just enjoying the views and comfortable seating.

Eventually, we went back to the cabin and I thought a nap sounded like a great idea. Naps on a sea day are everything I love about cruising.

After a quick nap, it was up to the Windjammer for lunch. 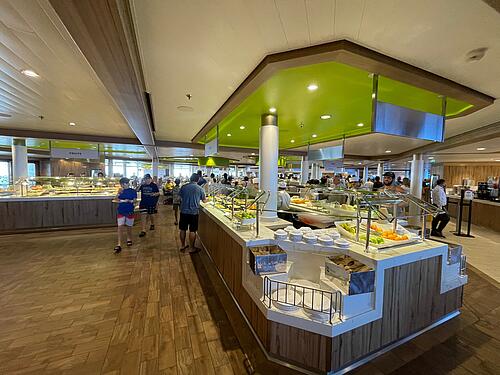 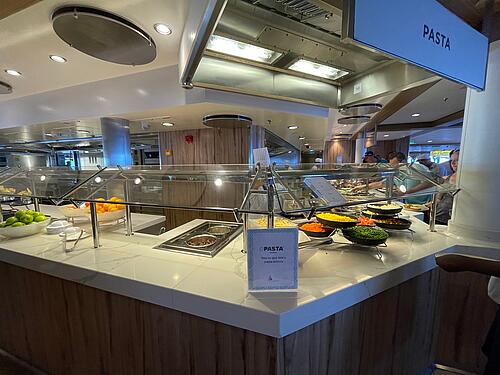 Since this was a late lunch and we had dinner early, I just had something to tide me over.

I forgot on Odyssey of the Seas, there is no outdoor seating at the back of the Windjammer like there is on other Quantum Class ships. Still a great view. 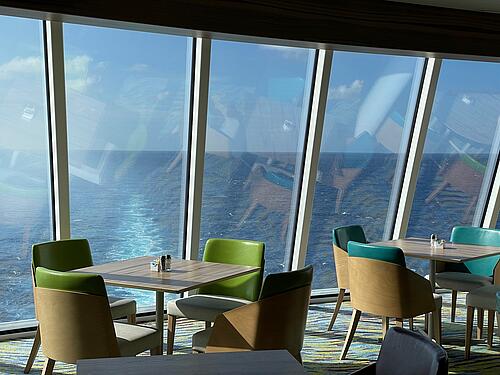 Back in the room, I was playing with the Royal Caribbean app and noticed the fun options it has on Odyssey, like the ability to open your cabin door with your app or control the television with the app. 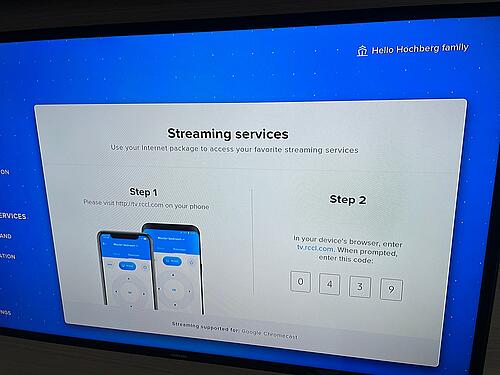 The kids wanted to hit the pool, so it was back up to the pool deck for some aquatic fun. 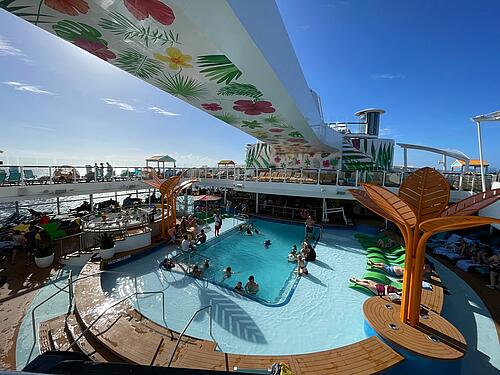 The kids had a good time swimming and going in the hot tub while I kept an eye on them from a lounge chair in the shade.

Dinner tonight was at Chops and it's formal night. 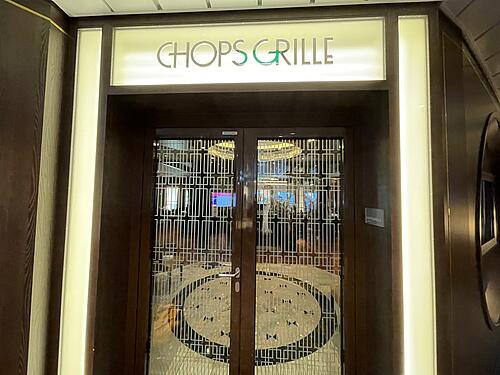 We had dinner with a group of friends on the ship with us, so it was a large seating and the staff handled it flawlessly. 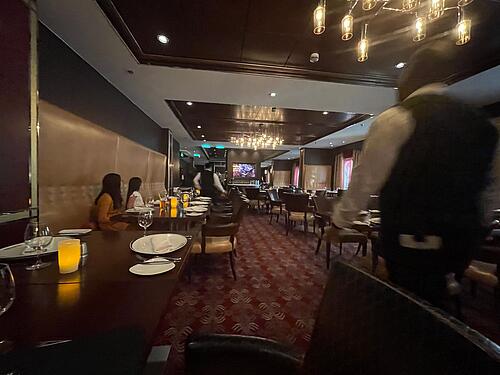 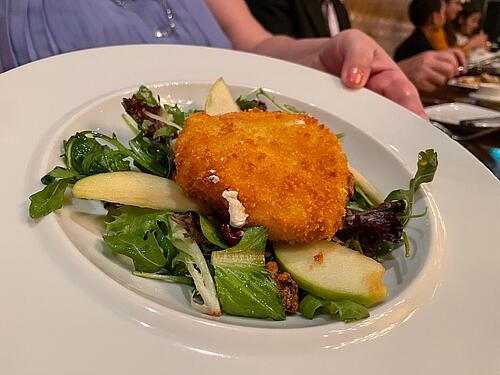 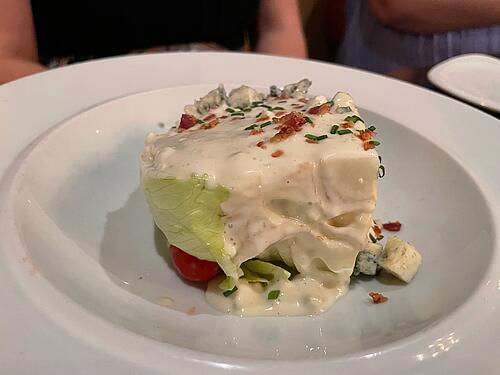 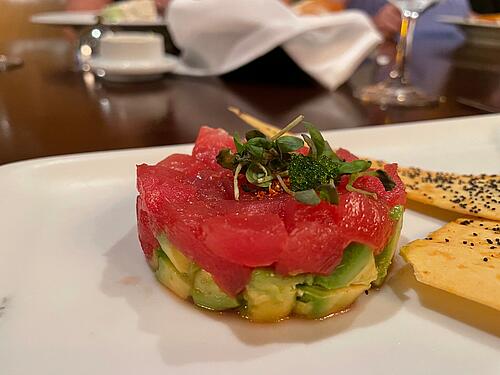 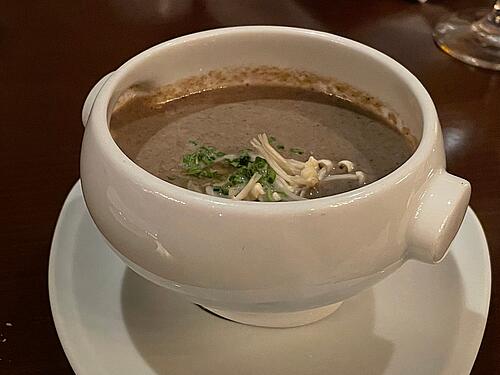 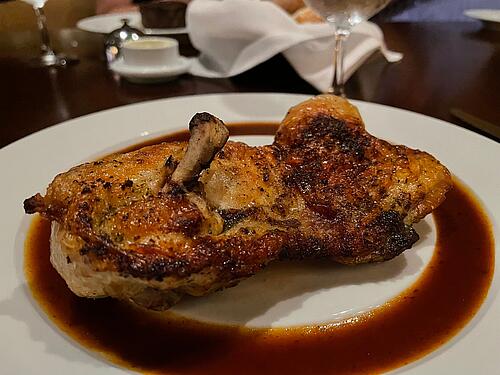 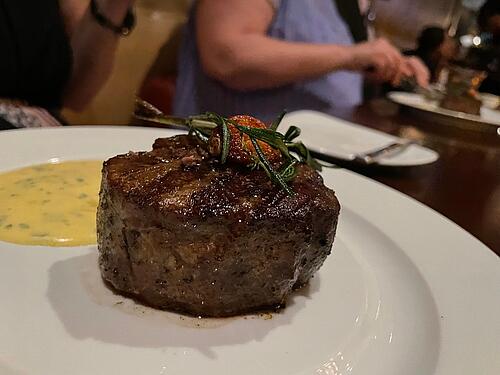 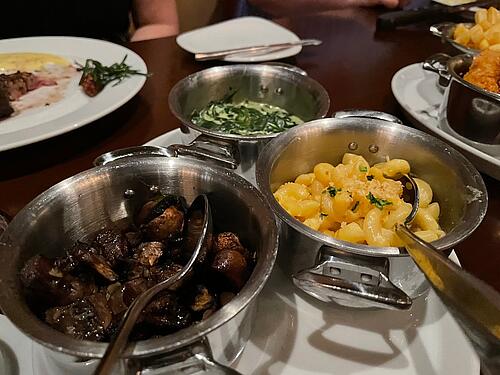 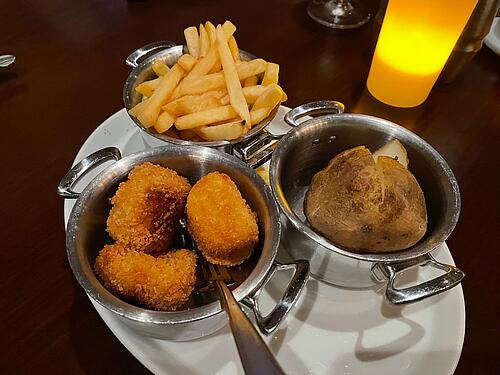 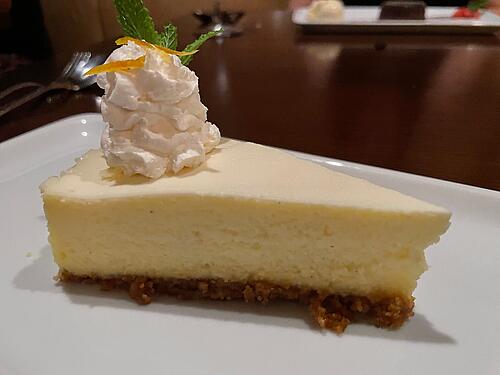 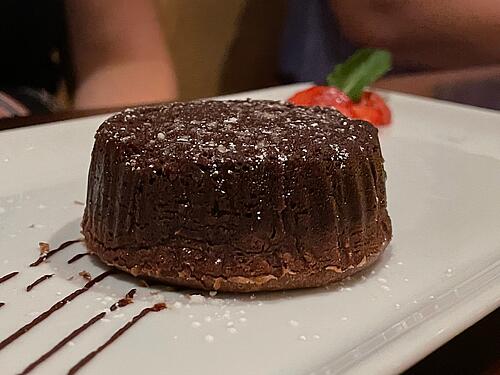 Service was great and the food was as good as I remember.

After dinner, my wife took the kids to see Showgirl. We saw the show the last time we were on Odyssey, but my kids wanted to see the show. 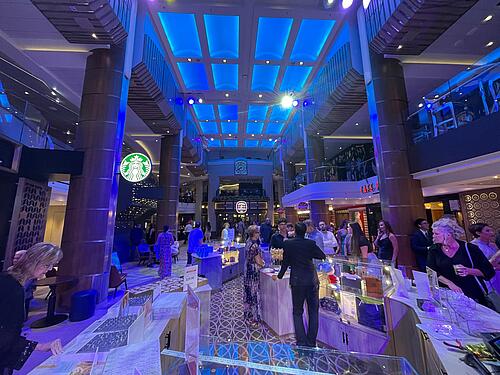 We met up at the 80's party in Music Hall. I greatly prefer the parties that would have otherwise taken up the Royal Promenade on other ships be relegated to the Music Hall.

When the band took a break, we went to the Schooner Bar to check out the piano player and it ended up becoming a game for the kids of "do you know this song". It's amazing how they know some random old songs but can also not know more modern music.

I rounded out the evening in the casino, where we had a friendly group of people. Shoutout to Greg for his "method" and casino dealer Matteo for reading the blog.

Tomorrow is our first port stop in Labadee.

I found the stowaway piano player! 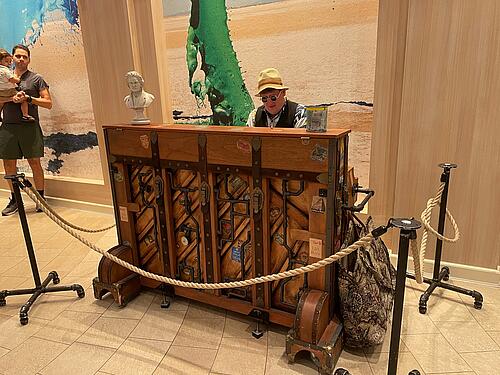 Odyssey of the Seas Live Blog - Day 5 - Jerusalem, Israel
Hello from Israel - we’ve made it! Our morning started super early with a 6:30am alarm, which gave us an hour to get…

Odyssey of the Seas Live Blog - Day 7 - Haifa, Israel
It’s Day 7 of our cruise and today was our third and final day in Israel. Our beautiful ship made the short journey…