In:
Mariner of the Seas Live Blog
By:
Angie Vognild

Although it was a day at sea, my mom and I had a busy day! 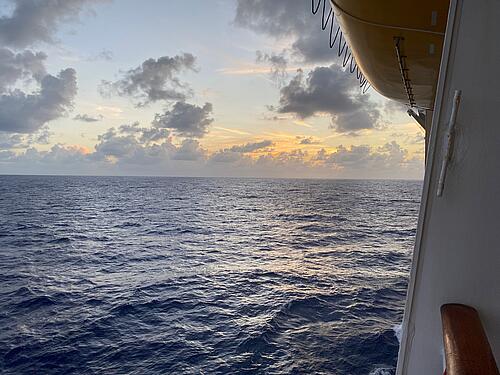 We both have slept in every day of this sailing, and today was no different. Patty has been wanting to try breakfast in the main dining room, so she hurried down to deck three before it closed at 9:30 a.m. I on the other hand went to the Windjammer because I needed to eat quickly.

Patty told me she was very impressed with how fast the service was in the main dining room because she arrived, ordered, and ate in only 25 minutes. She started off with a bran muffin and a fruit plate. For the main course, she got Eggs Your Way with sides of bacon and cheese grits. She was shocked by how big of a bowl the cheese grits were. The food was all very good, she said. Patty enjoyed being waited on and would do it again even if she had limited time to eat breakfast. 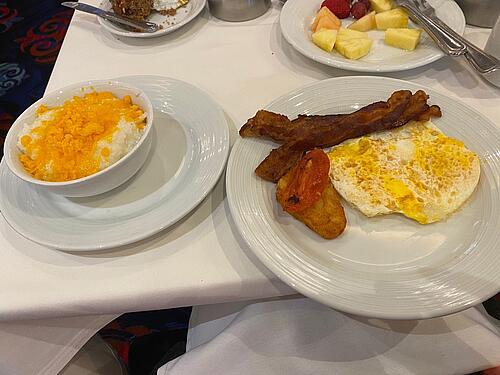 At 10 a.m., the group cruisers gathered in the conference room to hear Matt record a podcast for his channel. He described what he did at each port and his overall experience on the group cruise thus far. After that, he answered a few cruise questions people emailed him. It was fun to be a part of his episode.

I had been eyeing the frappuccino drinks at the Cafe Promenade, so I ordered a caramel one to try. I didn’t know if there would be coffee in it so I wasn’t sure what to expect. It did have coffee in it, but it wasn’t too strong of a taste so I was happy about that.

While I was getting my drink, the Veteran's Gathering was taking place. It was a special event, and I could tell many felt the same way. 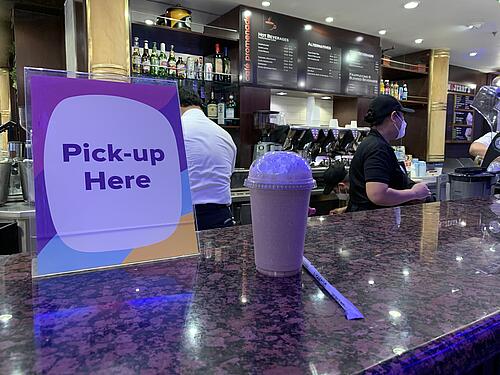 Next up on my agenda was the Ladies Pamper Party in the salon. I have been to this event multiple times on past cruises because I like to feel a little pampered every now and then! The event was busy, as all the seats were taken when my mom and I arrived. 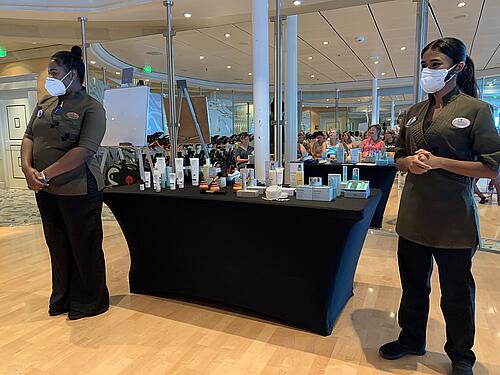 The employees sampled various cleansers, toners, moisturizers, etc., and described to us how to apply them to our face and neck. I have the same old skincare routine, so I enjoyed switching it up and experimenting with new products.

One of the products they used was the sunglow bronzer, which I have been using for at least 10 years when I purchased it on a previous cruise. The employees applied it to those that wanted to try it, so Patty and I had that done. 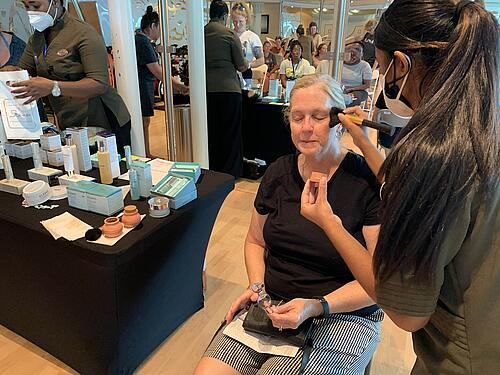 At 1 p.m., the group cruise had a private ice skating event in Studio B. After signing a waiver and getting geared up, we were able to hit the ice. I was very rusty at first and had to get used to the skates before I was comfortable to slowly maneuver myself around the rink.

Even Matt came on the ice for a short while! 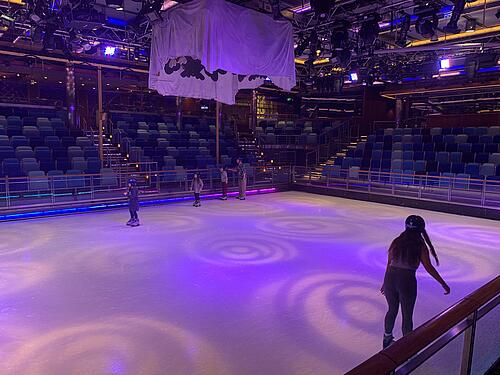 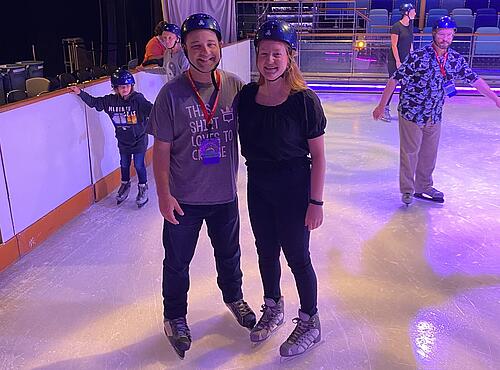 Love & Marriage was at 2 p.m., which I thought was an odd time because it’s usually at night during production showtime. Nonetheless, we attended the event with a strawberry daiquiri and lava flow in hand.

This show is one of my favorites, so I was excited. I have seen the show so many times that I can predict almost every question they ask the couples! The newlyweds won this time around. 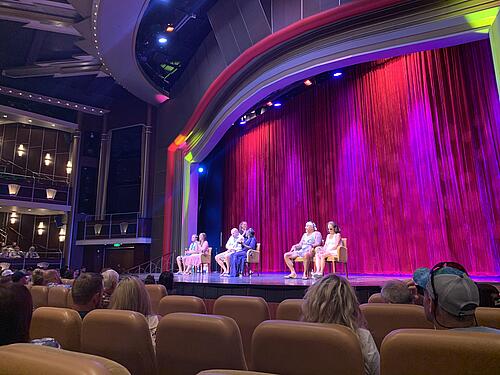 We had some time to spare before afternoon trivia, so Patty and I relaxed on deck four and watched the waves. Deck four has become one of our favorite quiet spots on the Mariner. 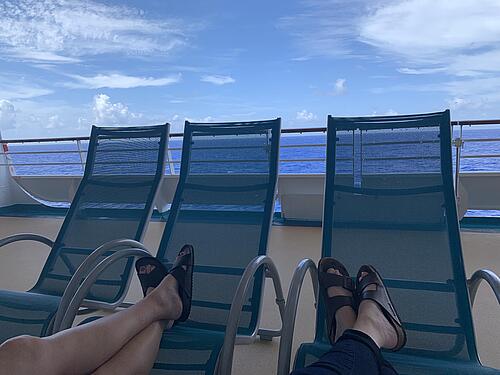 Patty likes to walk laps, and she said she prefers walking on deck four rather than deck 12. Deck 12 is busy with sunbathers and group gatherings that prohibit her from a constant walk.

Deck four is far less busy; even without a walking path, she gets a good workout in. Another plus is that for at least half of the time, she is in the shade versus in the sun on deck 12. 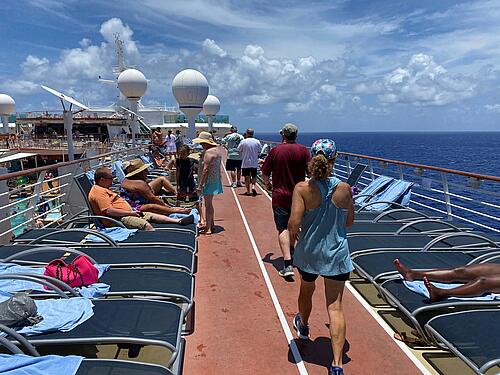 Patty and I had not been to general knowledge trivia yet on this cruise, so we were intrigued to see how we would do. We actually did not do too bad (I thought) and scored 9/20. We knew we did not win, so we left before they announced the winners (who got a perfect score). 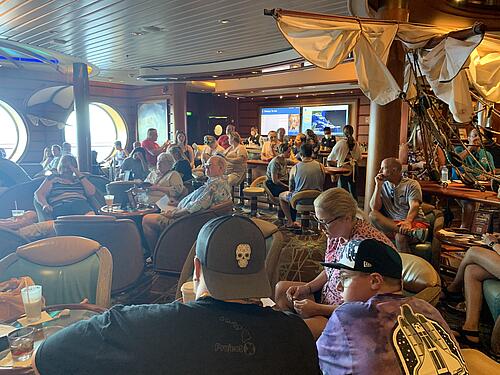 Since we were right by the casino, I wanted to test my luck. My family says I am the lucky one of the group, but that was not the case today. I did not bet much, but I lost it all and was left with a measly 0.24 cents. I left the casino with nothing to brag about, but I still had fun. 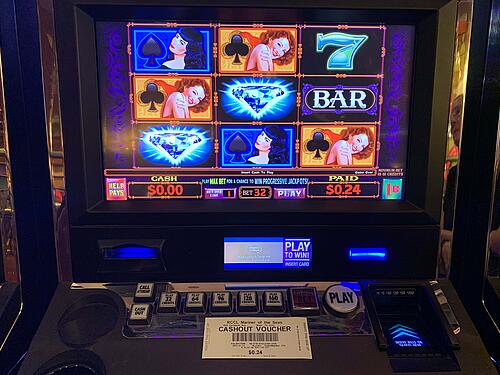 By this time, we needed to get ready for dinner. Tonight was “dress your best” night which is the equivalent of the old formal night. I find it interesting how they changed the terminology, but I can see why since people may not want to get dressed to the nines for dinner. I would estimate that only 25% of guests dressed in formal attire while most of us were business casual.

Upon seating at the table, you are expected to scan a QR code and use your phone to look at the dinner menu. My phone wasn’t easily accessible, so I asked for a physical menu which I appreciated. On this cruise, I realized I miss getting the physical menu every night, but I understand their reasoning to limit germs.

I started with the roasted tomato soup while Patty got the Asian-style pork tacos. The main course was chicken cordon bleu for me and tagliatelle pasta for Patty.

She told me she missed having meat during her dinner, so she also later ordered the grilled lamb chops. I helped her finish her pasta. 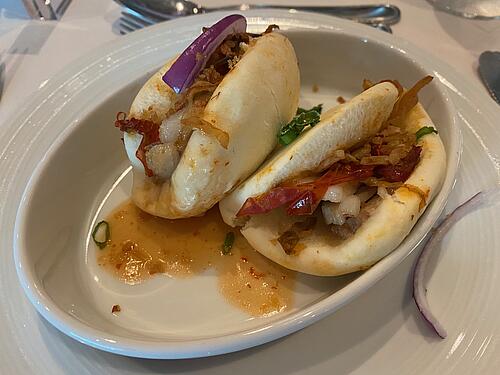 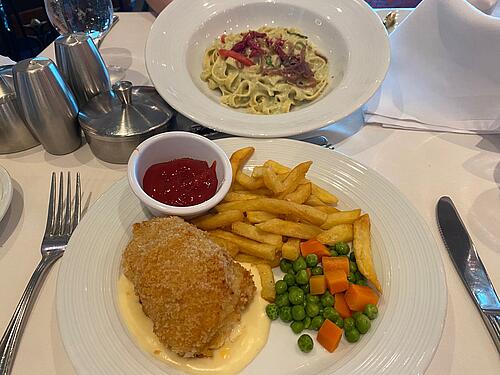 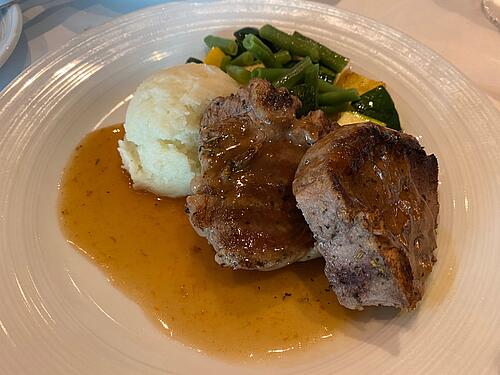 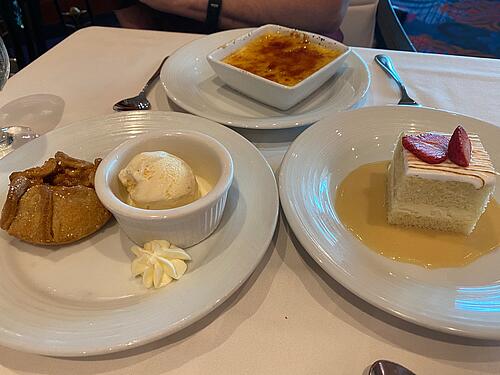 By the time we finished dinner, it was already time for the 7 p.m. headliner show “Center Stage.” I thought it was just the singers and dancers, but there was also a juggling & comedian act in the middle - The singers and dancers opened and closed the show. It was nice that we got to see a variety of entertainment that everyone could enjoy. 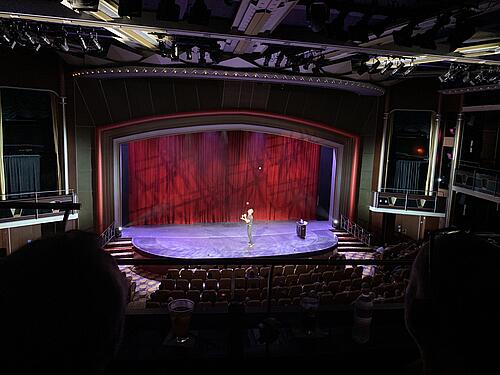 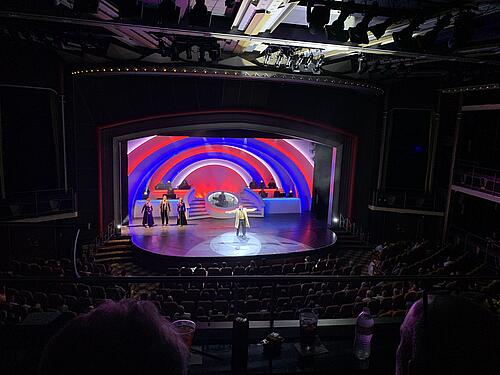 Right after the show, there was an 80’s party happening in the Royal Promenade. Similar to the 70’s disco inferno, there was music and dancing to all things 80’s. Patty and I watched the show for a little while, then we went to the Bamboo Room to share a mojito. The mojito in the Bamboo Room is excellent in my opinion. 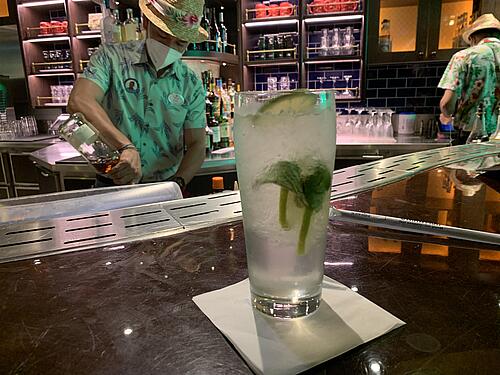 I had some time before the 10 p.m. game show, so Patty and I went up to the Solarium to relax in one of the daybeds. These are always occupied during the day, so we were happy to finally enjoy one tonight. We couldn’t even feel that we were moving and it was peaceful to hear the rhythm of the waves.

The game show was Adult Majority Rules. They had a regular Majority Rules earlier this cruise that I attended. The one tonight was a completely different version. It was so funny; I think I laughed the most I ever have during a game show.

Immediately after, there was adult karaoke. I listened to a few singers - some were great and others not so much. I can’t judge though because I cannot sing myself! 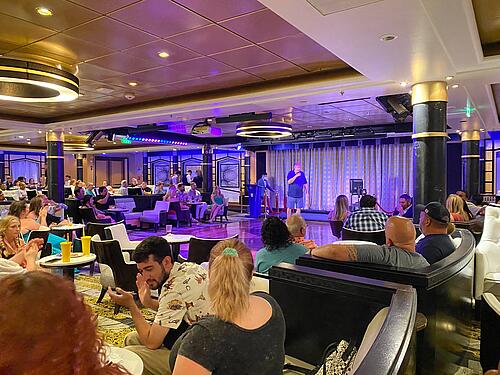 Tomorrow we will be visiting one of Royal Caribbean’s private islands, CocoCay.

Mariner of the Seas Live Blog - Day 2 - Nassau
We are back in Nassau for our first full day of the second leg of this sailing. Having been in Nassau two days earlier…

Mariner of the Seas Live Blog - Day 3 - Perfect Day at CocoCay
Today we arrived at the beautiful island of CocoCay, Bahamas, which is Royal Caribbean’s private island. Back in…

Live Blog Preview: Mariner of the Seas
It’s that time again to pack my suitcase, find some sunscreen and swab my nose for a negative covid test! My next Royal…