Greetings from Alaska! We arrived in our first port of the cruise today in Ketchikan. Mother Nature welcomed us with cloudy, foggy and rainy weather as we pulled into port. With a time change on our side, Sydney and I were up early at 6:30 AM. Others clearly had the same idea of getting a specialty coffee at Latitudes because the line was at least 10 people long.

The warm latte was perfect to sip on as we watched us pull into port from the heated Solarium. 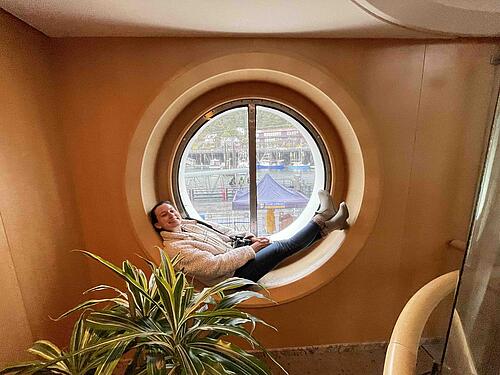 Outside looked like cuddle-up-and-watch-a-movie kind of weather. Everyone was wandered around the ship in their cozy clothes.

Sydney and I made a few calls home before having breakfast in the Windjammer. We had purchased tickets for the Trolley and Lumberjack show last night since the forecast was looking bleak. The excursion was scheduled for 9:45 AM (this is an important detail for later!), so we enjoyed a nice breakfast and took our time getting ready.

We bundled up with jackets, hats and gloves because we had seen even a few snow flakes from the top deck as we pulled into Ketchikan.

When the excursion leaves you behind

Sydney and I got off the ship around 9:35 AM and made our way to the terminal meeting place. We took a few pictures with the ship and started looking around for our excursion. 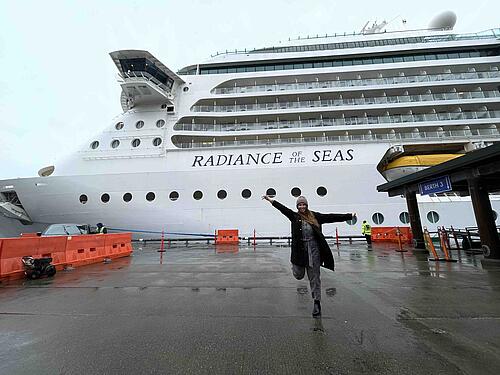 After looking around a bit, Sydney asked one of RCL’s excursion staff members where we should meet for the Trolley. We showed them our tickets and the crew member looked concerned and responded, “Oh… the tour has already left”.

We looked at our watches and it was 9:42 AM, so the trolley shouldn’t have even left the cruise port yet because it was scheduled to depart at 9:45 AM.

The crew member stated the meeting time was 9:30 AM and we told her we were in the terminal within probably 5 minutes of that time. We didn’t see the trolley or anyone holding the sign while we waited before asking for help.

She said she would try to call the trolley back, but then the other crew members stated the trolley wouldn’t be able to return to pick us up. We asked if we could go meet the trolley somewhere, thinking it hadn't gone very far. That wasn't an option, unfortunately.

Apparently, the tour only had 8 people booked for today. We bought tickets last night but she said 2 people must have bought tickets early this morning as well. The lists are printed the night before for excursion runs, so the total number of participants wasn’t updated from 8 to 10 people.

When 8 people showed up, the trolley tour decided to leave early because that matched the list total. Bummer for us.

At first, the crew members told us we could do one of the following: either take a later trolley only and miss the show or do a later lumberjack show and skip the trolley.

They said the later lumberjack show could include a crab feast, but it was $199. I think they could tell we were not pleased with either of these options and questioned how the excursion could have left without us when they had our names even on the list.

Finally, they said we could do the lumberjack show at a discounted rate - first it was 30% and then they upped It to 50%. This felt reasonable, so we accepted that offer.

We had an extra hour to burn so we shopped in the terminal and walked to a coffee shop in the freezing drizzle. 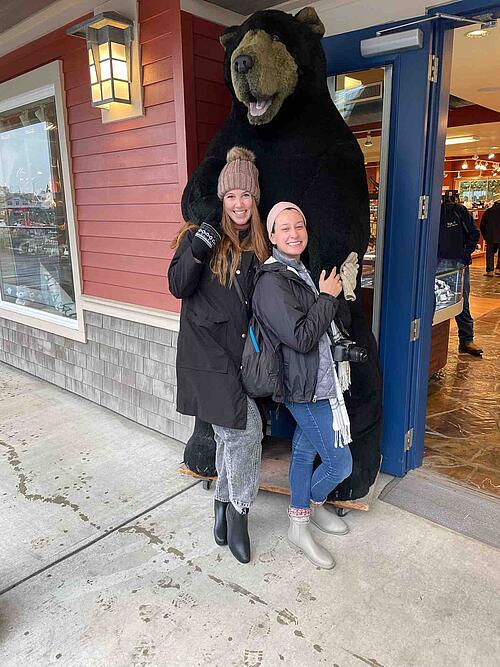 At the end of the day, this was probably just a series of unfortunate events on both sides. We should have been off the ship sooner to be at the meeting place right at 9:30. The excursion certainly shouldn't have left early and without checking the list of passengers who were booked. With such a small group, once everyone showed up, we were already out of luck.

I am glad Royal Caribbean gave us options and they wanted to make up for the unfortunate instance happened. Of course, we were bummed we couldn't do the trolley but at least we had options. 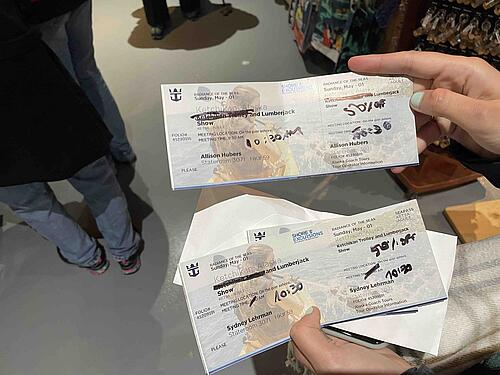 Sydney and I joked that 'travel is back!' and all of the unexpected that comes along with it - that's part of the fun. Our semester abroad was filled with the unexpected and unplanned. It's best to just go with the flow, especially traveling in this post-pandemic phase.

We figured that there would be transportation included to the show since it was raining. But, at the designating meeting place and time, they instructed us to all walk 3 blocks for the show. 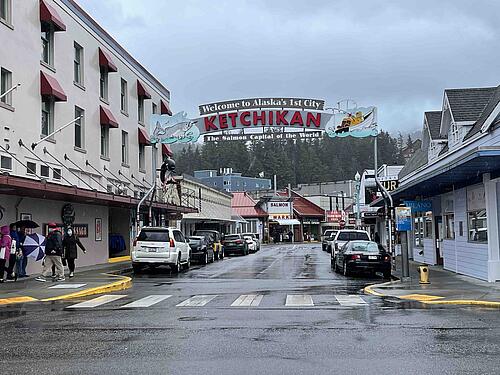 Here's us in the cold rain walking to the lumberjack show. 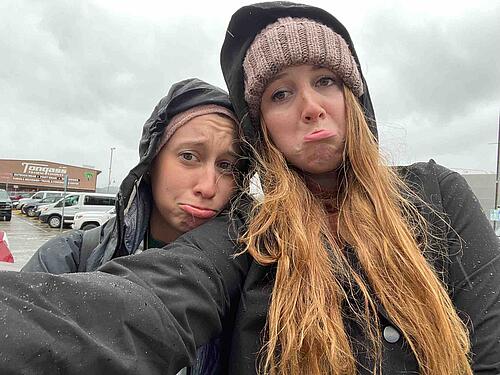 This was no big deal for us, but certainly took us by surprise because we figured the sticker price of $59 would include transportation. If we had older family members with us, I wouldn’t have been very pleased with walking in the rain.

As we arrived at the show, I saw a ticket stand at the venue where tickets were being sold for only $37 - for the same show and time!

Had we known this, we would have just done that from the start. The excursion didn’t even include transportation so there was literally nothing that made the excursion worth $20+ more!

Luckily, the venue was covered and had heaters. It was still very chilly and I opted to purchase souvenir gloves to be more comfortable.

The show was fun and very interactive. It was cheesy, which would make it a great option for families with kids. I am glad we opted to do the show since there wasn’t much else that appealed to us in town, especially considering the weather. 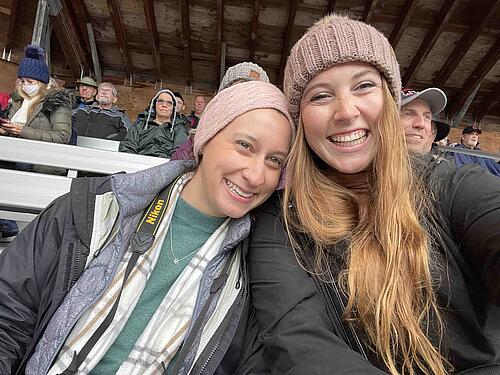 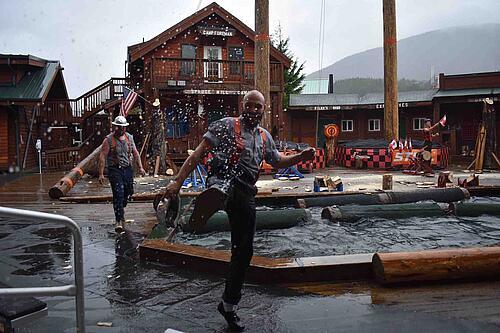 I wouldn’t say the show was worth $60, but it would be a nice activity for the $37 tickets sold at the venue. 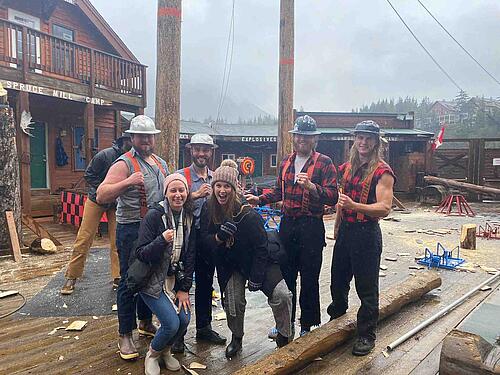 After the hour show, we briskly walked in the cold rain to Creek Street. I had visited this area with my husband last summer, and it was a beautiful spot to stroll and shop. We also had gorgeous weather last year, keep in mind.

Sydney and I walked into a few shops but after sitting in the rain at the lumberjack show for an hour, we were both pretty chilly and ready for lunch. 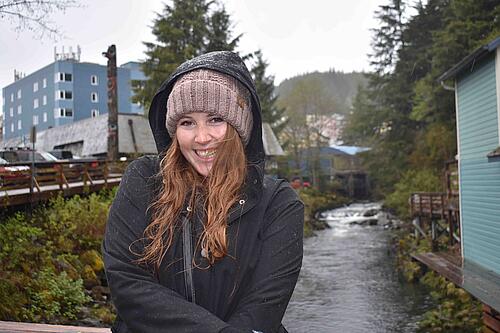 We did make one last stop to an art shop where the owner told us how her roommate in college did Semester at Sea 30 years ago, so that was a fun coincidence. 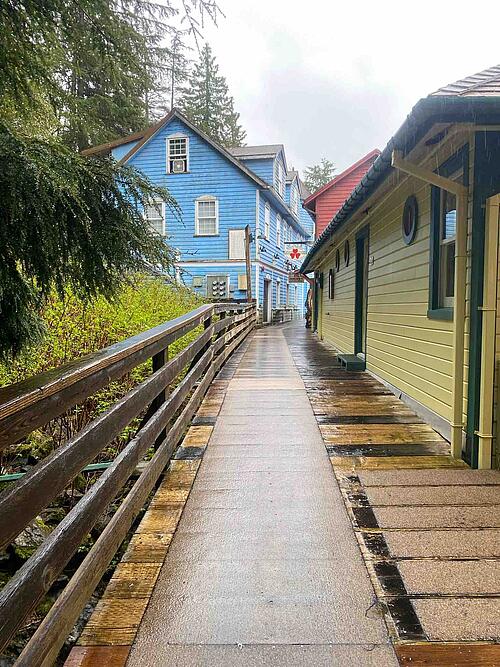 It was a quick walk back to the ship luckily. Ketchikan is very walkable right off the port area and it really is a lovely town. Last year, Luke and I grabbed lunch at a taphouse that had great food (cheese curds for us Midwesterners), craft beer and fun cocktails.

There’s also plenty of jewelry shopping and other local shops to enjoy. If you forget a coat for the cruise, you can find pretty nice coats for $10-$20 in the shops. We had to do this 12 years ago when we took an Alaska cruise and it was much colder than we anticipated.

After the excursion debacle and the cold weather, Sydney and I grabbed lunch at the Windjammer. We made our way to the Solarium where I plopped myself down on a chair with 3 towels and napped.

We heard that people who did the Misty Fjords that they had rough seas today, so I was grateful we didn’t choose that excursion. It was nice to come back to the ship and take it slow.

I strongly believe the scenery that can be seen from the ship is equally as gorgeous and scenic as the excursions offered to the fjords and glaciers.

Of course, if you want to do something particular or see a glacier, you will have to venture to those places specifically. Overall though, the scenery from the cruise ship is captivating and stunning on its own.

We’ve seen whales and dolphins from the ship too! Even just sailing the Inside Passage is great for me and I don’t feel like I need to do any special excursions to see more scenery.

Dinner in the dining room

Our first night in the dining room felt a little disorganized and chaotic. The servers seemed to be a little frazzled, perhaps because they had a much larger crowd this sailing than the last one.

Last week was the first sailing on Radiance of the Seas since the pandemic restart and 800 passengers sailed from California to Canada. This week, we have 1,600 passengers, which is around 60% capacity. I am sure that was stressful the crew to transition to a busier ship.

Tonight, we had great service in the dining room and the experience was much smoother.

We stopped at the Schooner Bar to grab a cocktail for dinner since the night before it took a while to get our drinks. One of the bartenders looked very familiar... and then it clicked - Luke and I had met her last summer on our cruise! She was from Colombia and gave Luke recommendations for an upcoming training he had in her home country. She remembered us, so that was another fun coincidence of the day.

Sydney had the lavender daiquiri and I had a strawberry mojito - both were excellent. 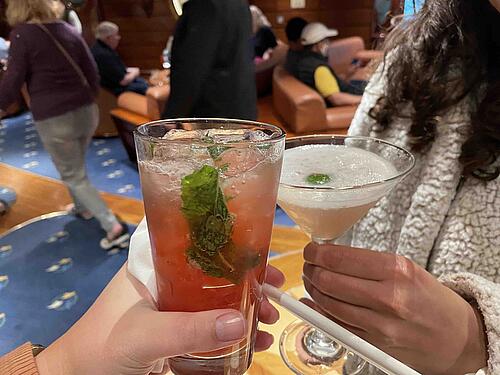 For dinner tonight, Sydney and I both started with French onion soup and had beef short rib for entree. Sydney’s short rib was fattier than mine, but it had great flavor and it was very tender. 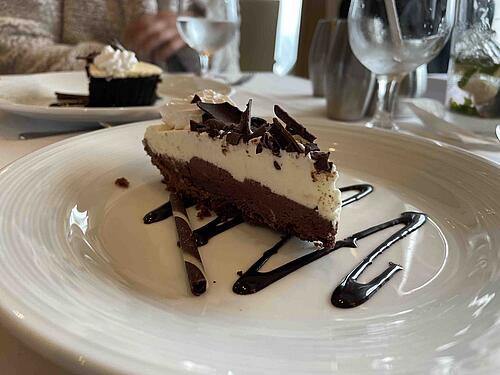 We both polished off the meal with Mississippi Mud Pie, which was excellent.

We had finished dinner just in time to make the 7:00 PM comedian show. Since we had missed both showtimes for the Tango show, we were excited to experience the entertainment.

The theatre was pretty full and we both liked the comedian, who was decently funny. With an older crowd onboard, the jokes were definitely geared towards the greater audience. 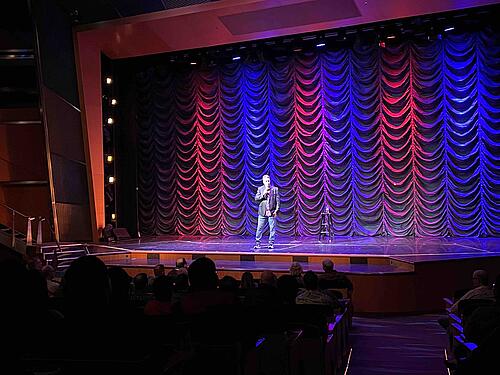 The internet connection has been great in the Solarium, so Sydney and I made our way up to the top deck to relax as the sun begins to set. There’s virtually no one in here; as I blog, Sydney as the hot tub to herself. 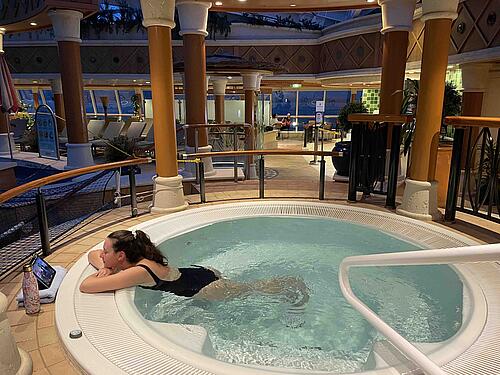 We arrive tomorrow in Sitka for our second port. Sydney did a little research and found that there is a bear sanctuary just 5 miles from the town.

A free shuttle is provided from the ship to the city center, which is a nice option. We plan to look at either a taxi or see if they have Uber or Lyft available for us to get to the bear sanctuary.

The weather outlook seems to be a bit more promising with only a slight change of light rain showers tomorrow in the afternoon. Hoping we get lucky with some better weather than today!

That’s all for now! Good night from Alaska.

Radiance of the Seas Live Blog - Day 4 - Sitka, Alaska
Hi from Sitka today! I am currently blogging from our cabin because the seas are a little rough tonight. Captain said 9…