In:
Oasis of the Seas Live Blog
By:
Jenna DeLaurentis

My last day on Oasis of the Seas is a sea day as we make our way back to Miami. I started my morning in the Solarium to watch the sunrise. It was extra colorful this morning, and quite a few passengers were outside on the sundeck. 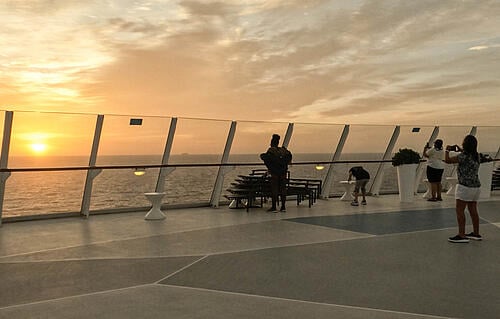 I then grabbed a banana, strawberry, blueberry, and peanut butter smoothie from Vitality Cafe. I'm definitely going to miss having made-to-order smoothies when sailing on non-Oasis Class ships!

This morning I had to catch up on some work for Royal Caribbean Blog, and as it was too early to head to my "wine office" at Vintages, I went to the Card Room. 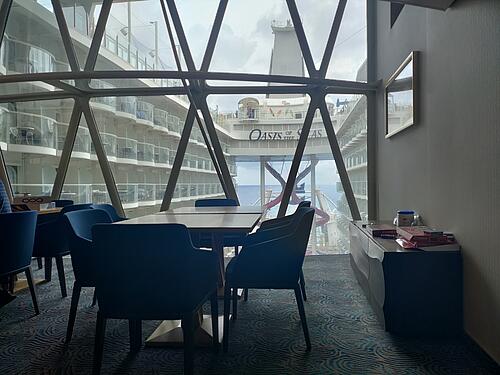 The Card Room is a little bit of a hidden gem on Oasis of the Seas, with a few sets of tables and chairs and a fantastic view of the Boardwalk and aft. There are several board games and cards available to use free of charge as well, which many passengers took advantage of throughout the morning.

This area of the ship was replaced with Wonderland on Symphony, Harmony, and Wonder of the Seas.

I decided to try something new for lunch and went to Portside BBQ. This is the only barbecue restaurant in Royal Caribbean's fleet, serving up classic comfort food and a variety of meats. It's only available on Oasis of the Seas, so I figured I needed to try it before the cruise was over. 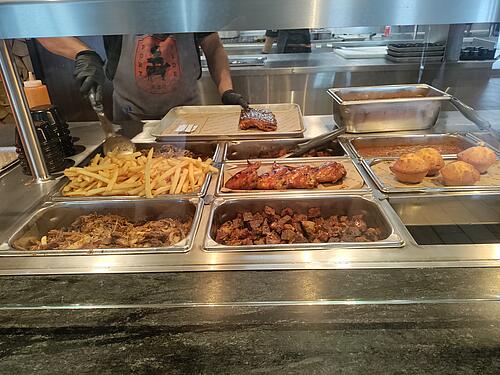 Portside BBQ is a casual, quick service restaurant, but it is not included in your cruise fare. Prices for a full meal range from $10-15, which includes a selection of meat and sides, ranging from pulled pork to brisket and turkey legs.

I am a pescetarian, so I admit I am the worst person to do a full review of a meat-centric barbecue restaurant. However, I still wanted to try Portside BBQ, so I ordered two sides and a dessert. 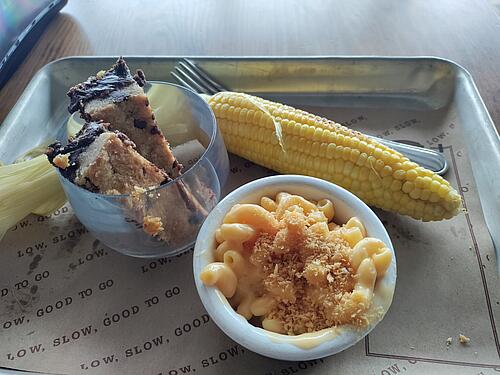 My sides (mac & cheese and grilled corn on the cob) were definitely tasty, although I thought the portions were a bit small considering each side was $3. The dessert, though, was phenomenal.

I ordered the Chocolate Brookie, a half-brownie, half-chocolate bar that was perfectly chewy, perfectly fudgy, and delightfully sweet. I am kicking myself for waiting until the last day of the cruise to order it! Luckily, each order came with two brookies.

The International Men's Belly Flop Competition was taking place after lunch, and since this is an activity that only recently returned to ships, I was excited to see what all the hype was about. 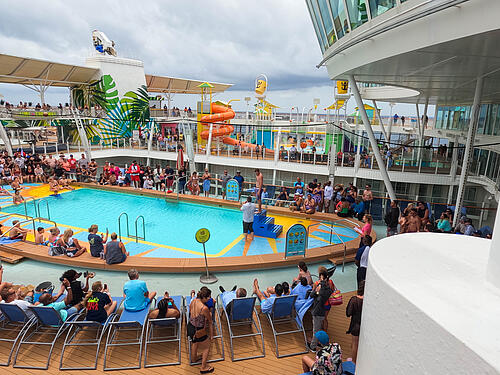 It may have been the most hilarious event I've seen on a cruise ship yet. A group of around 5 contestants jumped into the pool to try and make the most impressive (yet painful) bellyflop. The pool deck was packed with guests cheering on contestants. The winner was Tony from Mexico and I definitely agreed with the rest of the crowd that his belly flop was extremely impressive.

While on the pool deck, I decided to try a mocktail. I ordered the Lime & Coconut drink from the Lime & Coconut bar without rum, and it was really refreshing and tasty. We are planning to create a list of the top mocktails to try on a Royal Caribbean cruise, so be sure to share your suggestions with us! 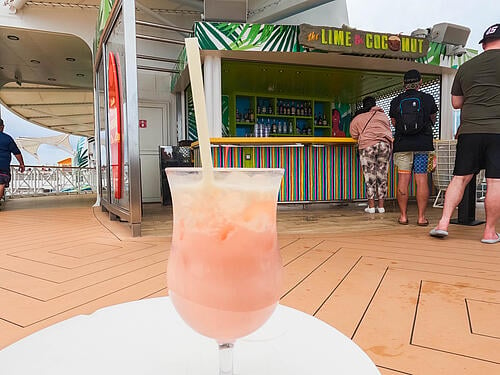 Next I decided to use my $6 free play at the casino. I never gamble (I guess living 5 minutes away from dozens of casinos in Nevada does that to you!), but I always like to use my free play money. Unsurprisingly I lost the $6 in a matter of minutes, so unfortunately I didn't win big today.

Oasis of the Seas is the third Royal Caribbean ship I've been on with a Broadway show, so seeing Cats was definitely on my to-do list for this week. When I sailed on Independence of the Seas and Harmony of the Seas in January, the Broadway shows were modified/canceled due to omicron, so I did not get to watch Grease on either ship. 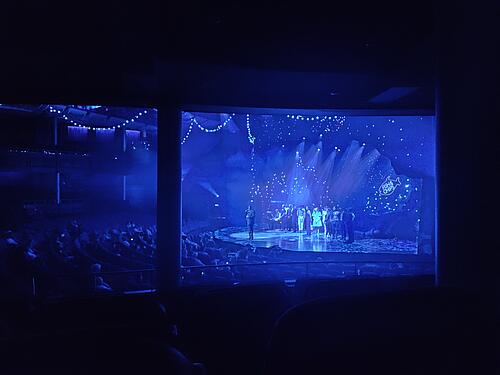 It turns out I couldn't see Cats today either due to injuries sustained by a few of the main cast members. Instead, a cabaret was performed by select cast members, with a combination of songs from the musical and songs picked by cast members themselves.

While it may not have been the Broadway show, I still really enjoyed the performance and the vocals may have been the best I've heard yet on a cruise. My next cruise on a ship with a Broadway show will be Anthem of the Seas this summer, so hopefully I'll be able to see We Will Rock You once onboard!

The show ended around 3:45, where I had a pre-dinner snack from Park Cafe and relaxed on the chairs at the back of the running track. 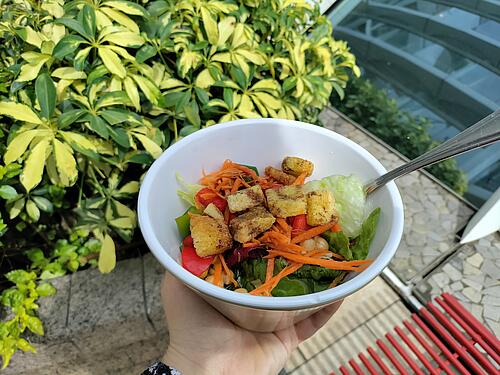 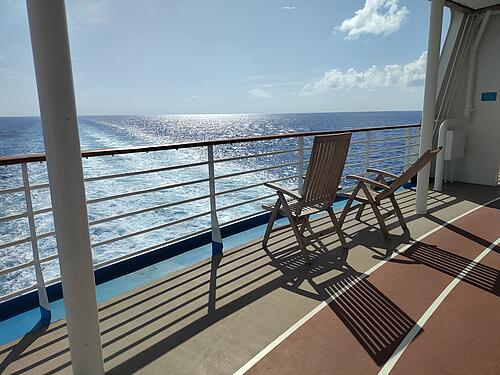 This is one of my favorite areas on Oasis of the Seas. While I like cruising on Oasis Class ships, I find that there are few places onboard aside from the pool deck where you can sit and enjoy an ocean view. Many venues, bars, and restaurants face inward, and with the lifeboats covering what would be the Promenade deck, it can be hard to find a quiet place to look out at the ocean if you don't have a balcony.

It still amazes me how powerful these cruise ships are and how vast the ocean is! I can easily sit and stare at the ocean for hours.

I had another quick dinner at the Windjammer. To avoid the monotony of another picture of Indian curry, here is a photo of tonight's fabulous dessert selection. 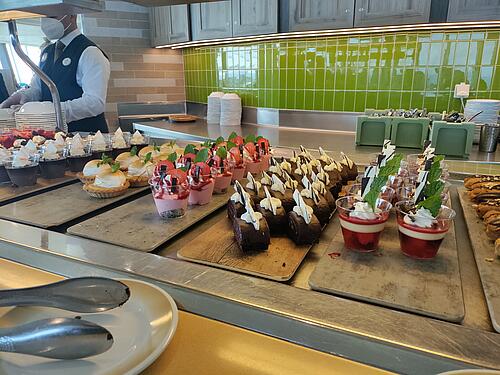 The self service buffet isn't as bad as I thought it would be, but I make sure to use hand sanitizer once I have finished touching the serving spoons and tongs. However, I did see a family avoid washing their hands altogether after one of the sinks wasn't working, so I still don't trust that the self service buffet is totally sanitary... 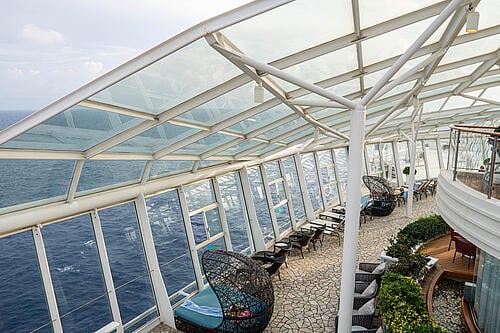 Sadly it was time to call it a night and get my bags packed for disembarkation tomorrow. I enjoyed my time on Oasis of the Seas over the past four days as we journeyed through the Caribbean and visited Costa Maya, Mexico. It's rare to see a 4-night cruise on an Oasis Class ship, so it was nice to take advantage of all that this ship has to offer in a short amount of time!

Luckily I don't have long to wait until my next cruise, though, as I will be boarding Freedom of the Seas in just two days!

All over Oasis of the Seas are the "Small Wonders", which are small portholes that reveal a hidden image once inside. For whatever reason, it brings me great joy to find these around the ship and peek at the artwork inside! It's a nice touch onboard Oasis.

I went to Guest Services to ask a question, and when we were talking I mentioned I was going on Freedom of the Seas this Friday. The representative gave me an at-home Covid test free of charge without me even asking! If you are cruising on another Royal Caribbean ship within the next two days of your first cruise, they should provide you with an Abbot BinaxNow Ag Card Home Test.

Oasis of the Seas Live Blog - Day 7 - Sea Day
Today is our last day on board Oasis of The Seas and this week flown by!  This morning I told my girlfriend we would…