Today is the fourth day of the inaugural voyage of Wonder of the Seas. I (Jenna) am taking over the live blog from Matt for the rest of the cruise, and I can’t wait to keep discovering both the ship and ports of call throughout the week. 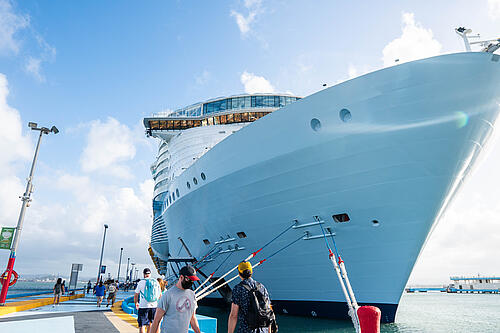 I started my morning by finishing up our FULL ship tour of Wonder of the Seas. Have you seen it yet? Be sure to check it out on our YouTube channel for an in-depth tour and guide to the ship.

Breakfast today was a highly anticipated event: brunch at The Mason Jar. I had enjoyed dinner at The Mason Jar earlier in the sailing, but the brunch menu was something I was definitely looking forward to trying.

Before eating, I attended a cocktail demonstration where we could learn more about the full list of new cocktails available at The Mason Jar. 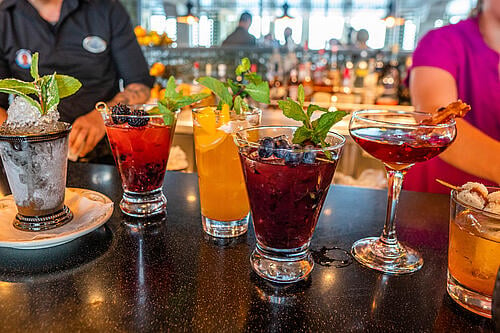 There is an extensive selection of brand new cocktails available, from the Mississippi Moonlight to the PB&J Old Fashioned and Mint Julep. The menu also includes a few dessert cocktails, such as the All Shook-Up milkshake with peanut butter whiskey and banana cream rum, and ice cream and soda floats. Both alcoholic and nonalcoholic floats are available. 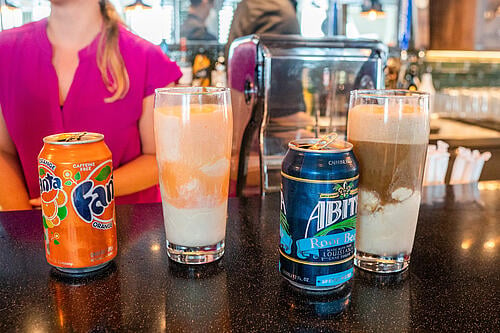 The brunch menu is split into savory and sweet options, and each meal starts with an appetizer of Jalapeño Cornbread and Pimento Cheese and Saltines.

My first thought as our brunch entrees were brought to the table was WOW! I ordered the Red Velvet Pancakes topped with cream cheese icing. Other members of the table ordered Meemaw’s Fried Chicken N’ Waffles and the Sweet-Tooth Cinnamon Roll. 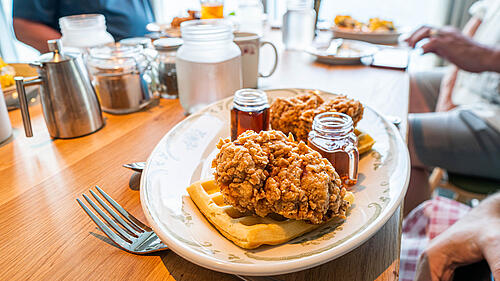 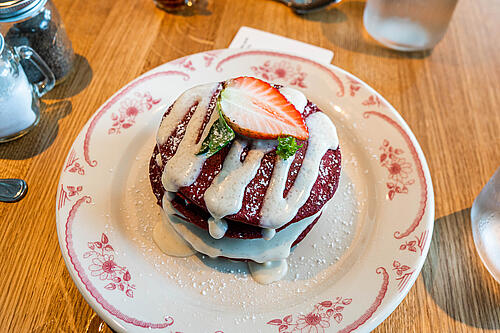 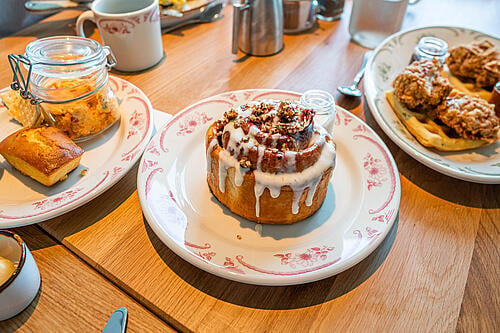 I enjoyed my dinner at The Mason Jar, but as I am partial to loving breakfast food, brunch was certainly a highlight of my cruise so far.

I watched Wonder of the Seas sail into San Juan as I was touring the Suite Neighborhood. We arrived in Puerto Rico at 1PM and the ship was not leaving until 9PM. This was my first time experiencing an evening spent in port, so I was excited to explore the city during both day and night. 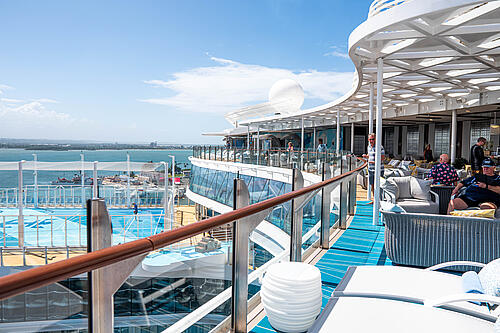 After catching up on work, we disembarked the ship around 4PM. As we headed down the pier, a Royal Caribbean Blog reader came up to us and told us we must try the pastries from the baker at the end of the pier. He sells homemade pastries from the back of his car, and the guava and cheese pastry was a great pick-me-up before exploring San Juan. 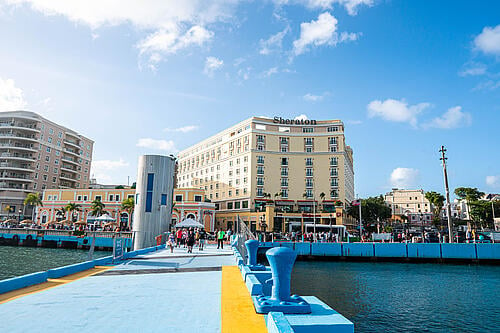 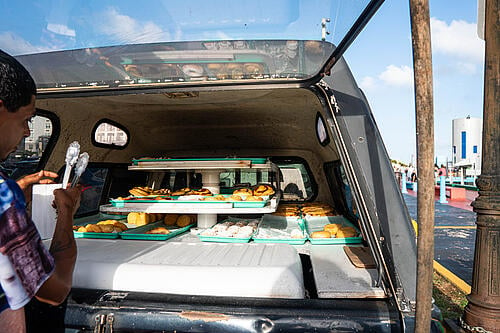 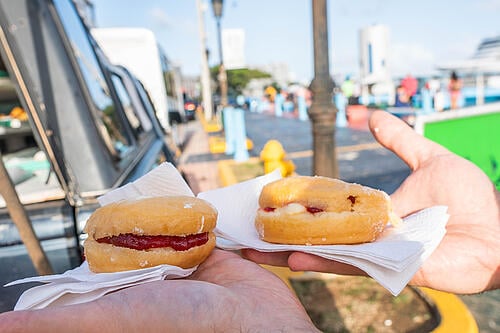 While I have been to San Juan before, I had never come here on a cruise, and I was pleased to find out how convenient it is as a cruise port. Wonder of the Seas was docked in the heart of Old San Juan, so the whole historic area is easily accessible by foot. 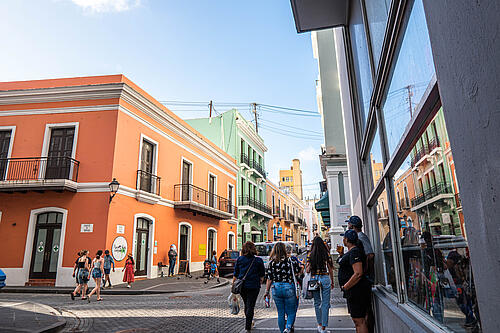 The breezy afternoon weather was perfect for walking around, and we spent some time strolling through the city’s colorful cobblestone streets.

As sunset drew near, we grabbed a drink and walked along the sidewalk heading to El Morro, a historic citadel at the edge of Old San Juan. El Morro is surrounded by spacious greenery, which makes for nice people watching. 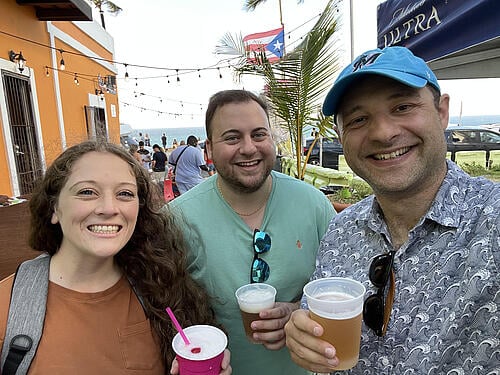 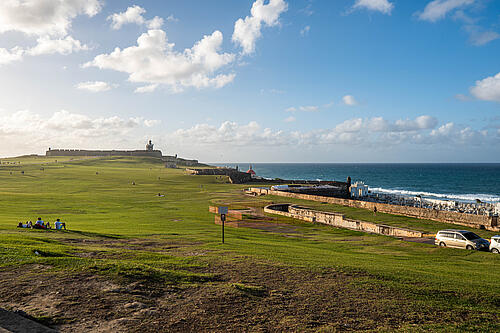 We continued our walk along the Paseo de la Princesa, a waterfront boardwalk that borders the historic walls once used to protect the city. 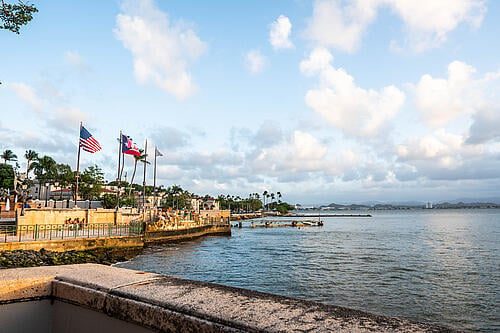 As the sun set, we walked to La Factoría, a local restaurant and bar in Old San Juan. This unassuming venue located on a corner with no signage turned out to be a great choice for dinner and drinks. 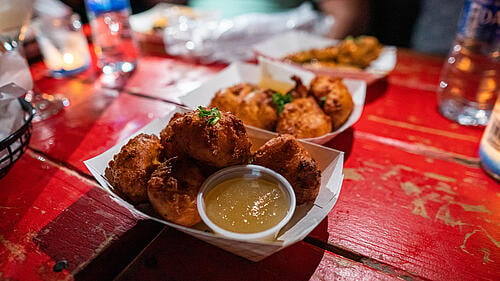 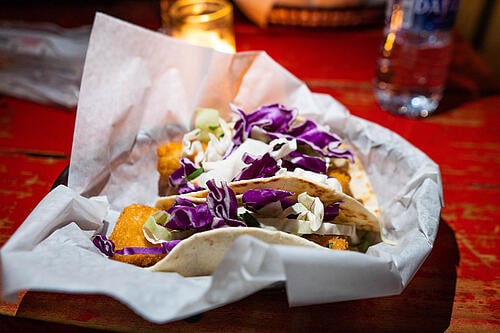 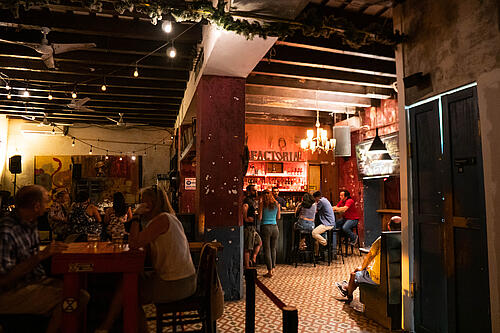 The menu focuses more on small bites than big entrees, and we enjoyed fish tacos and almojábanas, a type of cheese bread found throughout Latin America.

It was nice to be able to spend an evening in port as opposed to on the ship. As this isn’t very common on cruise itineraries, I enjoyed having dinner at a local spot and walking through the city’s streets at night. 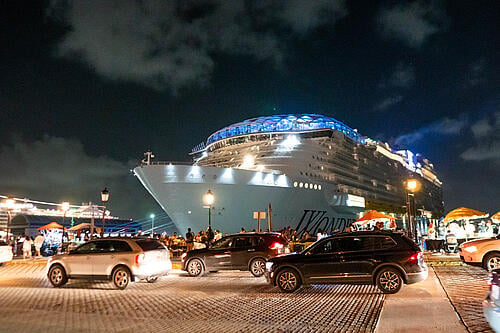 Back onboard, I went to the AquaTheater for the showcase of inTENse. This is the first AquaTheater show with an all-female cast. While the full show itself is not ready yet (the cast just got onboard a few weeks ago), a showcase is being performed this week with bits and pieces of the show. 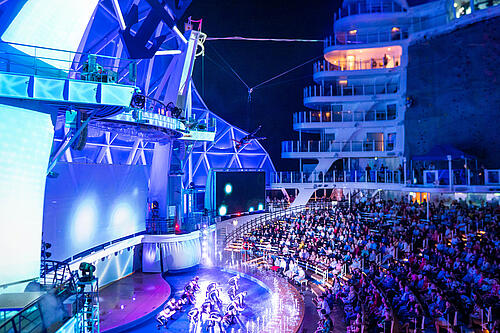 As we left San Juan the seas were pretty choppy, so the showcase was shortened to a brief segment. What I saw, though, was spectacular, so I am excited to see the rest of the showcase later this week. Our show reservations were automatically switched to Thursday evening instead when we should encounter better weather.

I called it a night after the AquaTheater performance to get some rest for a full day at sea tomorrow.

In the Royal Promenade today were some of the set pieces for Anchor Aweigh, a parade coming to the Royal Promenade. While the parade is not yet ready for this week, it looks like it will be an interesting thing to see on future sailings. 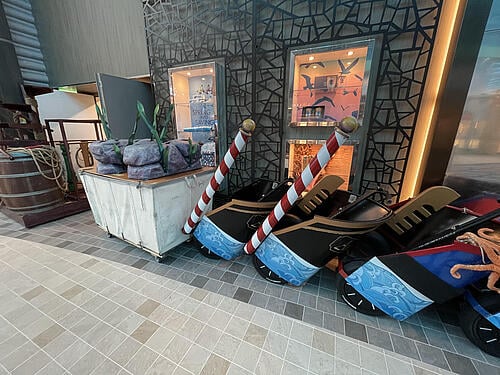 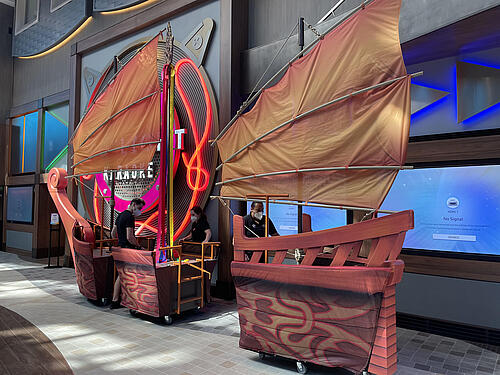 There have been surprises waiting in our cabins on every night of this sailing. Tonight was a plate of macarons and other small patisserie.