8 things some cruisers do that annoy everyone else

Being respectful to other people on your cruise ship is something that should be automatic, and yet, there are plenty of times where cruise ship guests do things that make you shake your head. 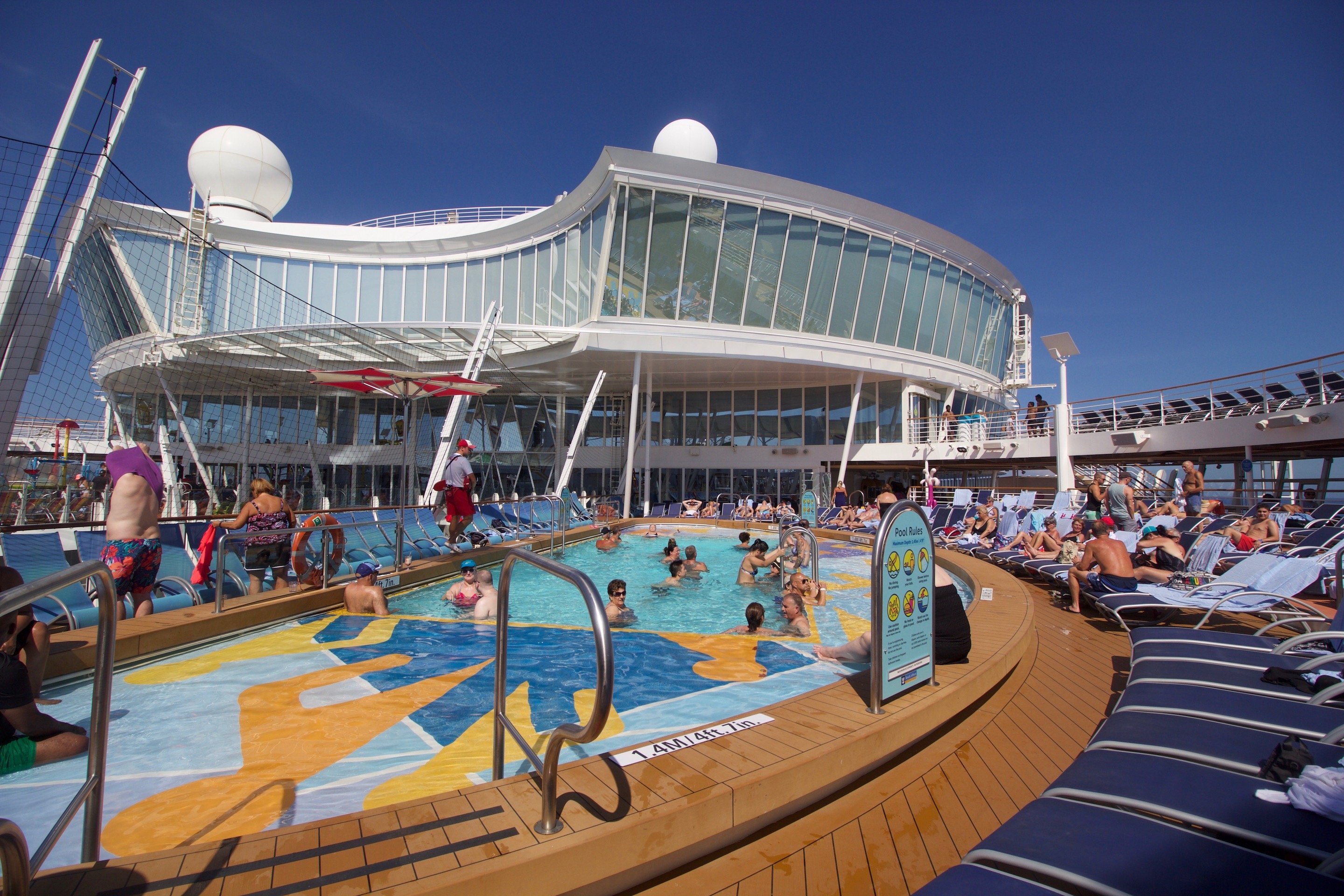 Most of the time, people do the right thing, but occasionally you might witness someone breaking an unwritten rule of cruising. Whether it is poor etiquette, manners or selfish, these kinds of missteps are things no one wants to see.

In an effort to avoid any of these gaffes, here are the top commonly made annoyances you should avoid on your cruise

Grabbing food from the buffet with your hands 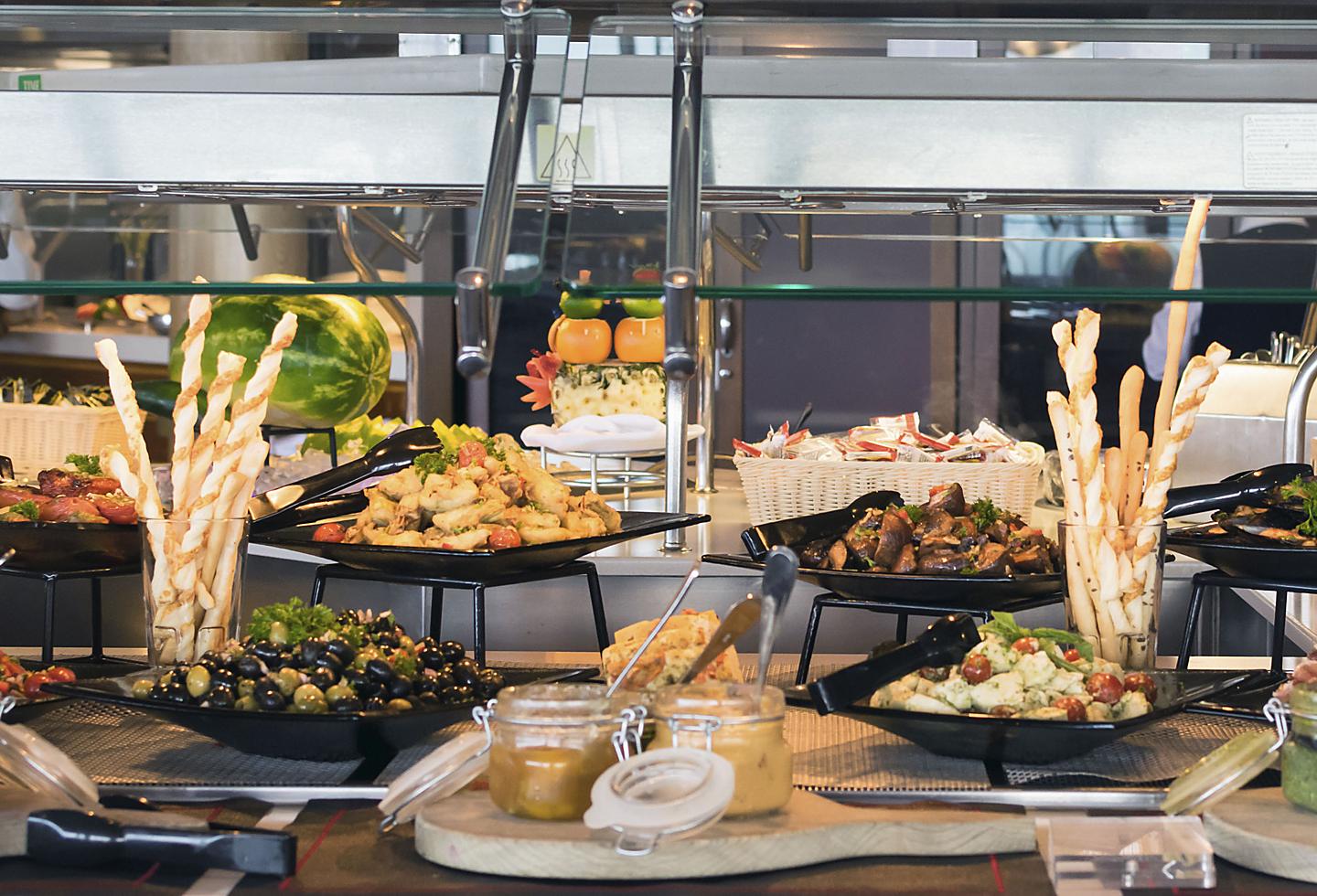 This might be a thing of the past when cruises actually resume (since buffets will change to full service for health reasons), but never grab food with your hands instead of using a tong.

While it may seem innocent enough to grab a roll, apple or strawberry as you pass by with your hands, doing this spreads germs more than you might think. Not to mention the fact if you touch something and then change your mind, no one wants to eat that.

The provided tongs are simple, so use them. 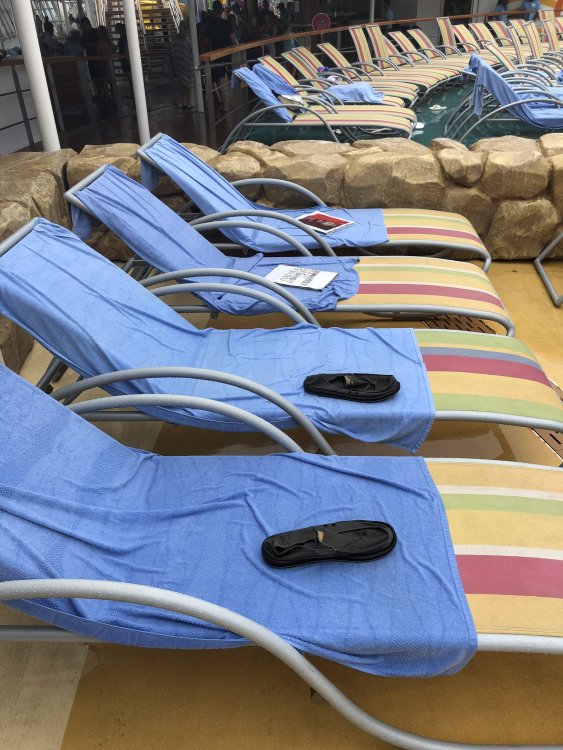 People reserving chairs at the pool deck for the entire day is a major pain point for so many cruisers.

There is no issue with a family spending the day at the pool, but the people that get up at dawn to reserve chairs, then disappear for a few hours to arrive later on is something that has gotten out of control on many ships.

Of course everyone wants to have a chair near the pool, and obviously there are not enough chairs for everyone on the ship at once, so the considerate thing to do is only reserve the chair while you are there. If Aunt Beth is busy at the gym, getting her nails done, or sleeping in, reserving a chair for her for a few hours is also not cool.

Lead by example and regardless of what others do, only take chairs while you are actually there.

Not washing your hands 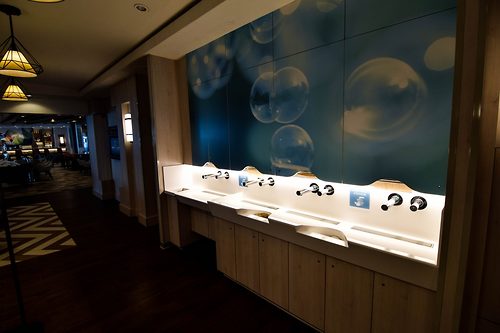 If the current global health crisis does nothing more than to force everyone to finally wash their hands after using the restrooms, then at least a little good came out of all of this.

If you go to the restroom, wash your hands upon leaving.

You would be amazed how many people skip washing their hands after departing the restroom, or prior to entering a restaurant or buffet when there are crew members actively reminding everyone to wash.

For the benefit of everyone, keeping yourself as germ-free as possible is the right thing to do.

Removing gratuities to save money 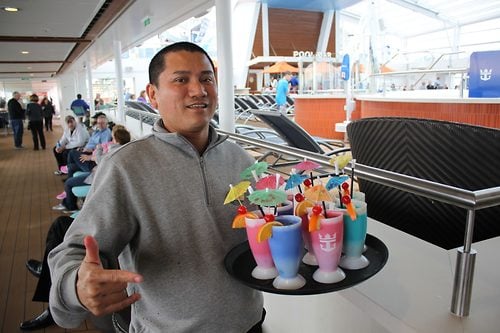 Royal Caribbean allows guests to remove the automatic gratuity as a way to give crew members cash directly. It is not a mechanism for bypassing gratuities all together.

Like it or not, gratuity on a cruise is part of the overall cost.  Yes, technically they are listed as optional, but in practice, they are there to reward the hard working crew members that look after your every need.

If you are removing the gratuity in order to make your vacation cheaper, you should reconsider a cruise vacation. 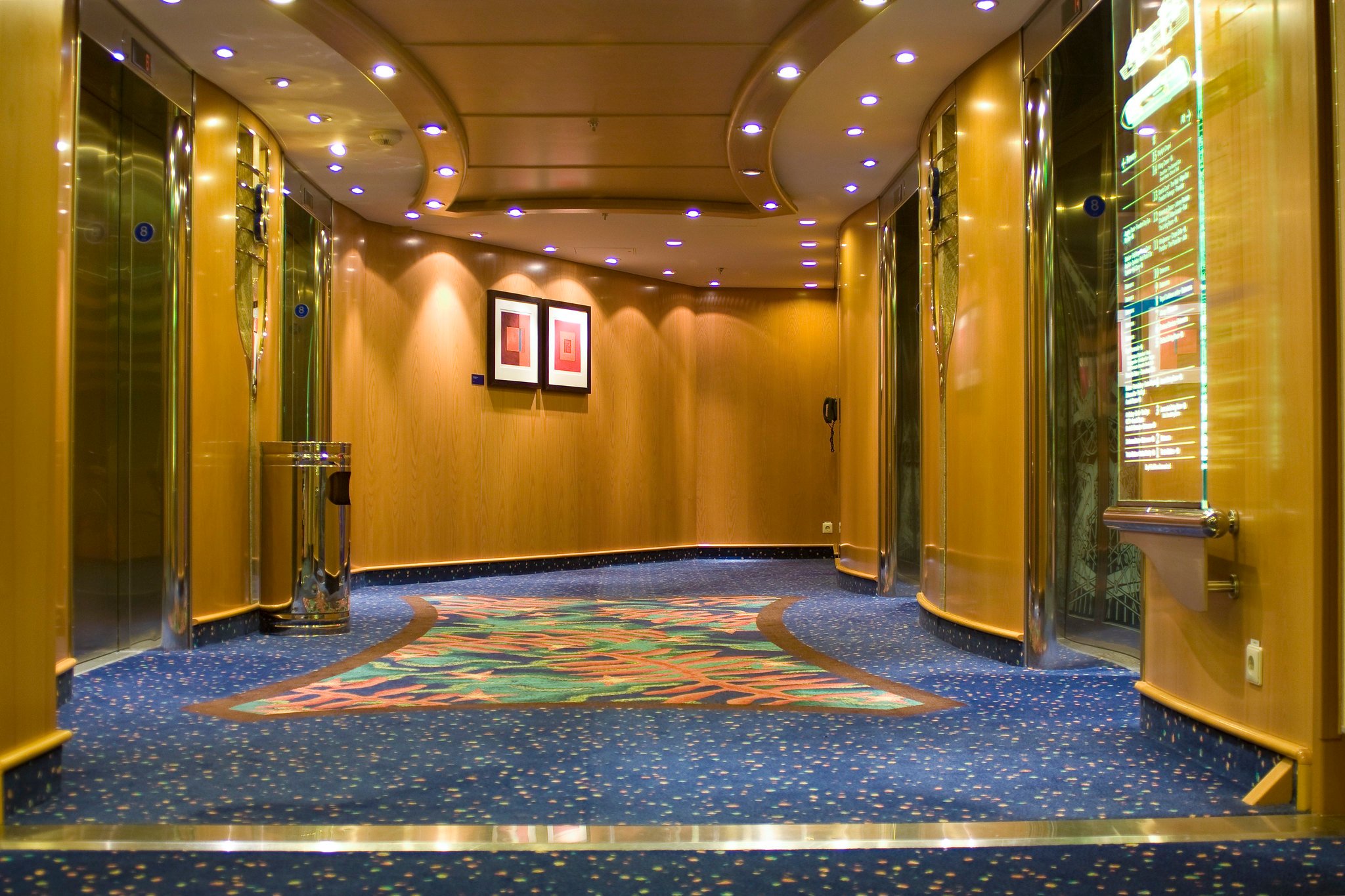 Whether you are in a rush or just on your way, there is no reason not to let the people in the elevator out first. Letting them out speeds up the process for everyone, and it makes it clearer how much room there is for others to board the elevator. 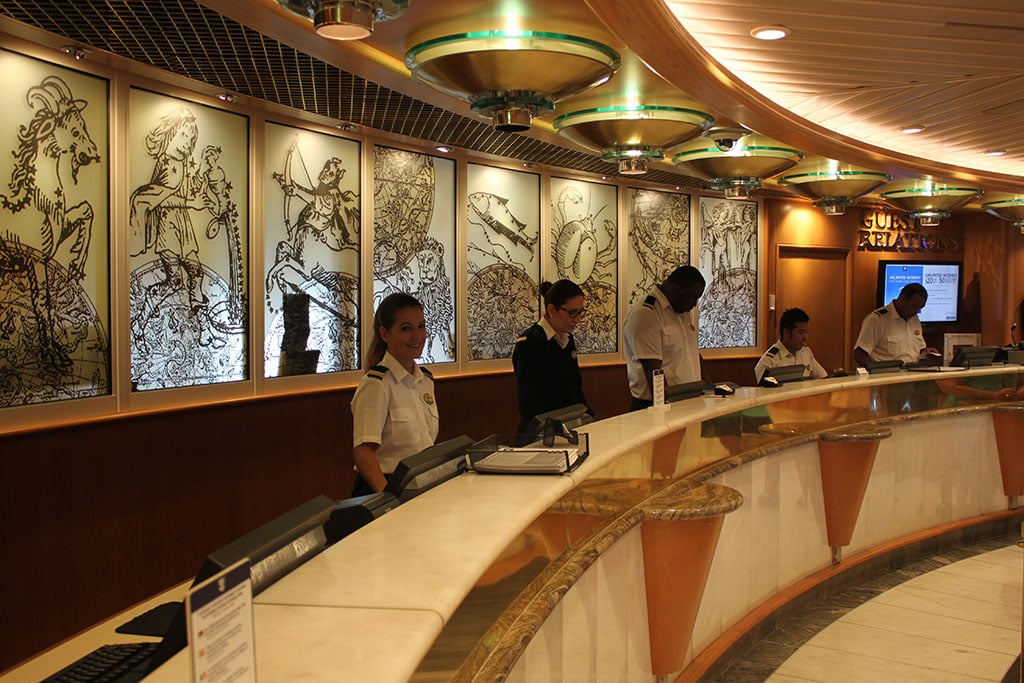 When a crew member gives a guest an instruction, it is not a suggestion.

Crew members are not only present to serve, but also to maintain order and ensure safety protocols are being followed. So when a crew member tells you to do something, ignoring them or circumventing their instruction is a bad idea.

Not only is it disrespectful, but you may be putting yourself or others at risk by continuing to do whatever you were just told not to do.

Flaunting your Crown and Anchor status 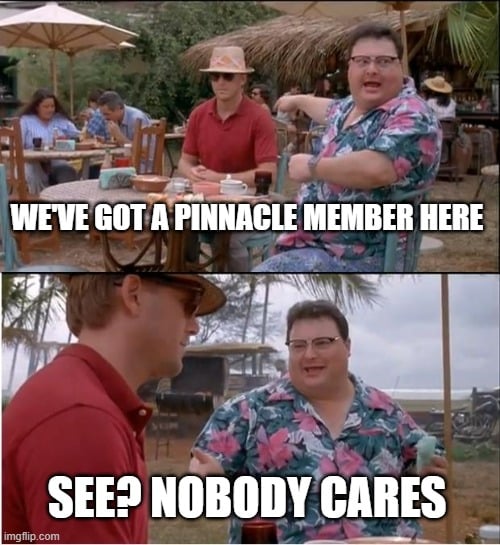 If you have cruised enough to get to the top tiers of Crown and Anchor Society, you should be proud of the fact you made it that far, but everyone else does not really care.

Royal Caribbean provides pins, lapels and even special events for its top cruisers as recognition for their loyalty. But being a top tier member does not mean everyone else on the ship needs to be constantly reminded of that fact.

Essentially, take the benefits Royal Caribbean provides for being a loyal cruiser, but conversations involving your Crown and Anchor tier are not necessary.

Getting in a fight

Not only is getting in a verbal or physical altercation really silly, it is against the cruise line rules and you will likely regret it later.

Think about any shouting match or fracas you may have been involved in, and then think about if you wish now that you avoided the whole thing.

If there is a problem with another guest, speak to a crew member so they can get involved. Even if it is one of the annoyances listed in this post, it is not your place to enforce the cruise line rules or even common courtesies.

There is no winning when it comes to these sort of altercations, so move on or alert a crew member to take care of it.

6 things that happen on a cruise that nobody talks about
The appeal of going on a cruise is so much of the experience really is unlike anything else, and with that, comes a few…

Expert-level cruise tips that all the cruise pros use
If you have done even a tiny bit of research, you are well aware of common cruise tips, such as not overpacking or to…