In:
Harmony of the Seas Live Blog
By:
Michael Poole

It's hard to believe we are already on day five of this cruise; they always go by so fast. Today we have our second sea day, as we sail to Cozumel, Mexico. I did sleep in until 8am today, since we were up late, but 8am on vacation might be considered early to some. 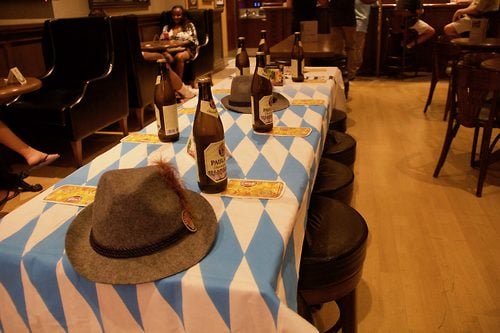 Today was actually a pretty busy day as far as our schedule goes. I didn’t go to the pool today, I needed a break from the sun, so I spent most of the morning down in the Royal Promenade. I noticed they had a drink table set up, selling $8 bloody mary’s, not a bad price for on board prices. I also saw them setting up for Oktoberfest fest in the pub. They were selling a large pint glass to take home for $18, but it came with a 32oz of beer. Also you could buy the 10 drink draft beers card in here today for $49, which is made for sharing if you like. 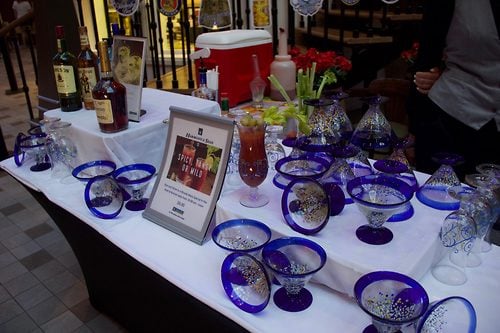 First event today was lunch at Sabor at noon. We had the usual margaritas and tacos. Not much to describe here, other than I like the shrimp taco’s a lot more than the chicken taco’s. 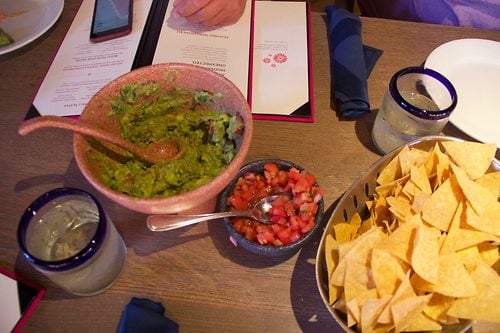 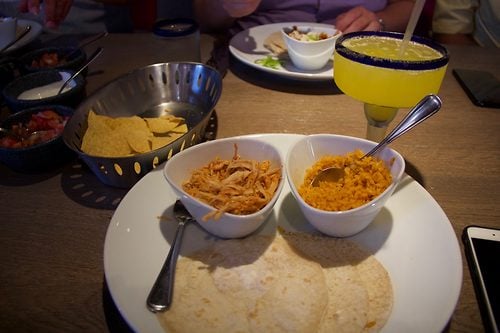 The blog group had an official meet-up today down in the conference room, we played a game called Super Password. Matt had asked me to be a panelist for the game, which I agreed to not knowing anything about the game. It’s kind of hard to explain, but you have to guess a word with only sharing one word. I didn’t win, but I sure had a lot of fun playing and meeting up with the group. 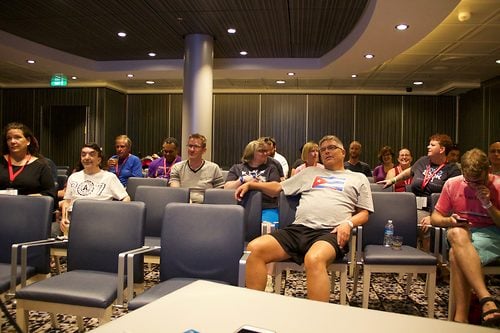 Our next event today was the loft suite, “sweets party.” We had two loft suites beside each other, and opened up their balcony doors. They had food, cakes, and even an open bar for everyone in the group. It was fun to see the loft suites and have pre-dinner in Matt’s cabin. 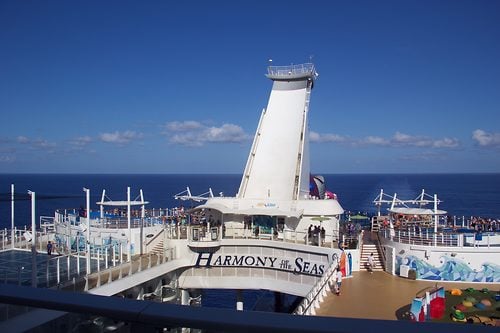 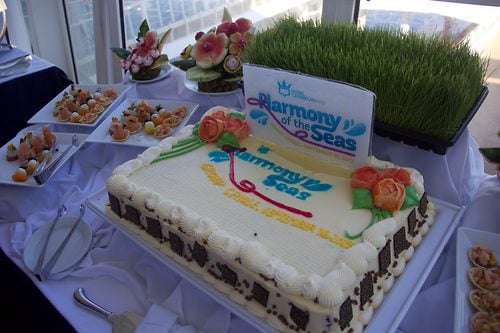 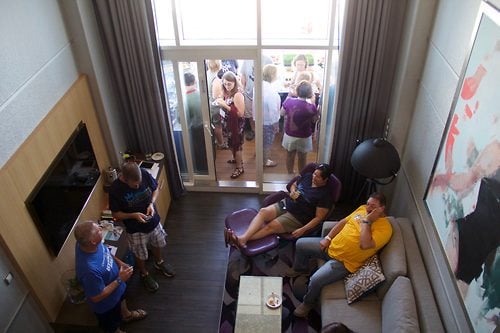 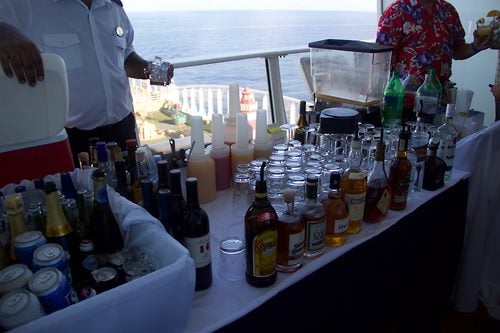 Dinner was in Costal Kitchen tonight; this was my first time dining here all week. In the Junior Suites you are invited to dine here for dinner only. 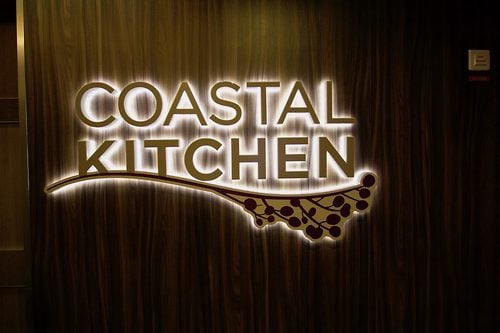 I absolutely, love the views from the suite area, it reminds me of the Viking Lounge on Majesty of the Seas. I was able to watch the sunset, while having a glass of wine at dinner – it was perfect! 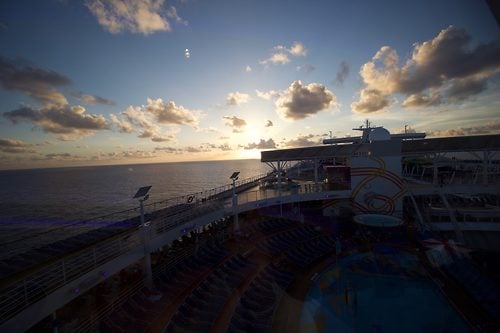 The service was outstanding; I never asked for another drink, they just brought them. The food was also great, I enjoyed the smaller amounts of food since we have been eating so much. 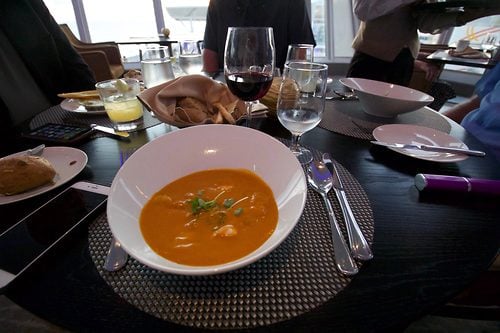 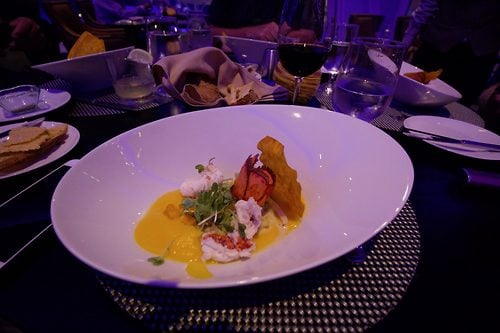 Tonight was the 90’s street party in the Royal Promenade. This is a brand new show that’s only on Harmony of the Seas. Her sister ships have the 70’s street party, so they are trying to progress a few decades for the younger generations. I enjoyed the show and seeing something totally different than I’ve seen before. However, I did miss the Columbus the musical show, since they were both at 11pm.

After the street party, I hung out in the pub for a few hours with our group. The music stopped kind of early, but we stayed and had our own fun. Well that’s my full day on board Harmony; tomorrow we are in our last port Cozumel, Mexico.

Harmony of the Seas Live Blog - Michael's Day 4 - Falmouth
Today was our second port day in Falmouth, Jamaica. We had a long stay here today, 10am-7pm I would imagine since many…

Harmony of the Seas Live Blog - Matt's Day 4 - Falmouth
Our second port stop brings us to the port of Falmouth, Jamaica.Our shore excursion did not begin until 11:45am, so we…

Harmony of the Seas Live Blog - Day 6 - Sea Day
Day six is here and it only our second sea day, which is kind of hard to believe because I am used to having more sea…

Harmony of the Seas Live Blog - Day 2 - Nassau
My favorite day of any cruise is always the second day, because it is the first full day onboard and that means a full…