7 fun facts about Royal Caribbean's Radiance of the Seas

In:
Radiance of the Seas
By:
Matt Hochberg

While Radiance of the Seas had her maiden voyage in 2001, she remains a staple of Royal Caribbean's fleet.  Built in Papenburg, Germany at the Meyer Werft shipyard, many guests from all over the world have enjoyed cruises on her. 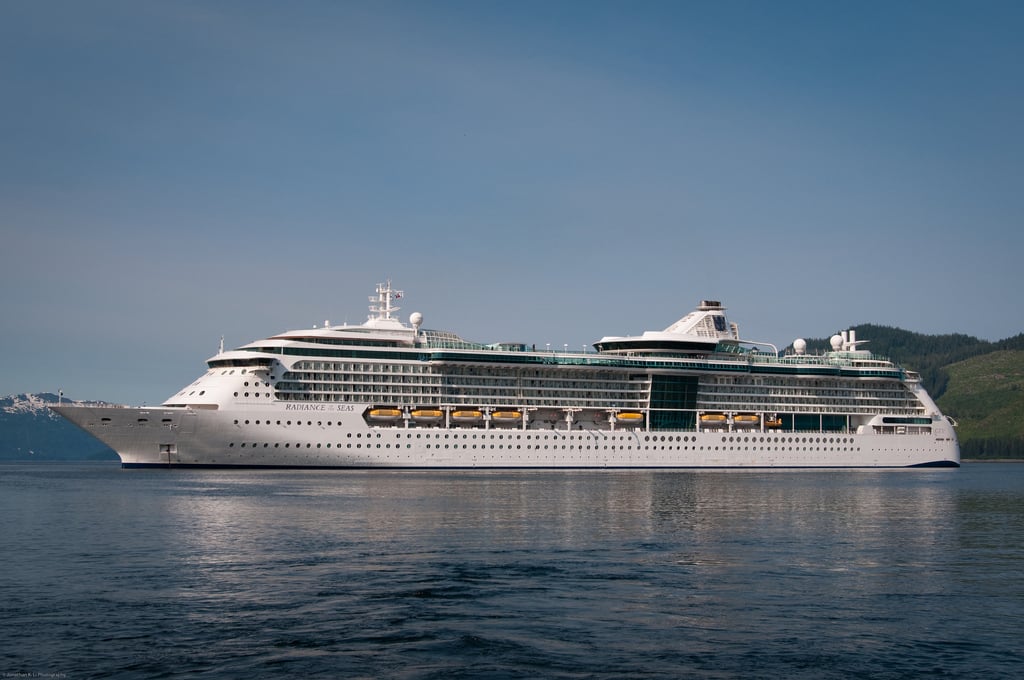 Looking back on her history, we dug through Radiance of the Seas' history to share with you seven fun facts about this fantastic ship. Whether you have sailed on her before, or are planning on taking a cruise soon, check out what makes Radiance of the Seas so special.

Designed to sail the world 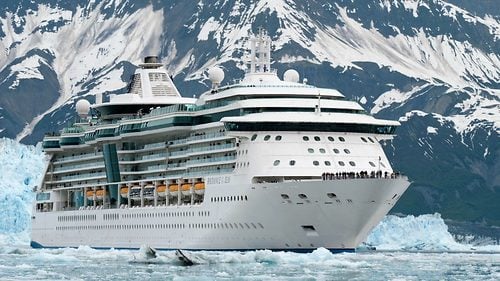 When Royal Caribbean build Radiance of the Seas, they called her a "New Generation World Cruiser," because she was intended to sail worldwide itineraries.

The 88,000 tons ship is build to be flexible and to cruise comfortably in destinations from Alaska to the Pacific Northwest to Hawaii to the Panama Canal to the Caribbean. In the years since, Radiance of the Seas has even found her way to Australia and the South Pacific.

Radiance of the Seas is faster and has better maneuverability because of a combination of an Azipod propulsion system, unusually powerful bow thrusters, and a dynamic positioning system that uses GPS navigator to allows the ship to maintain a better position.

Radiance of the Seas was designed to be linked to the water in both warm and cool climates.  The abundance of windows, stateroom verandas, the wall of glass along the atrium, and the all-glass elevators facing the seas were all elements introduced in order to foster a relationship between the vessel's interior and the landscape design.

Radiance of the Seas debuted just after the first Voyager Class ships launched, Voyager of the Seas and Explorer of the Seas.  As a result, Radiance features main cutting-edge features that she inherited.

The Steering Committee responsible for Radiance of the Seas' very being knew they wanted to incorporate many of Voyager of the Seas' entertainment and dining options, the global itineraries of the Vision Class ships, and some new innovations as well.

Specifically, Senior Vice President of Marine Operations Harri Kulovaara said, "We wanted to use some of the elements of the Voyager class and put them into a Panamax-size ship.  We wanted the ship to be sleek and represent something new in the exterior design, to be more of a mega-yacht and less of a bulky megaship." 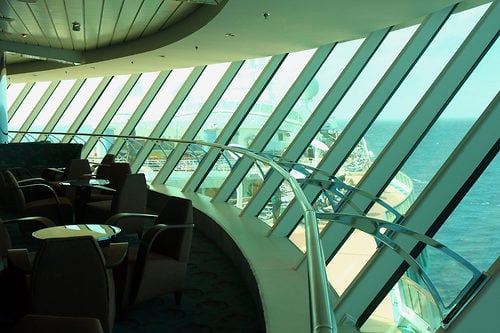 Royal Caribbean made a name for itself with its signature space, the Viking Crown Lounge.  It was originally created in 1970 for Song of Norway, and became so popular it continued be a staple of Royal Caribbean ship design.  Over the years, as ships grew in size, the Viking Crown Lounge grew, too, and starting with the Vision Class ships in 1995, moved from its position on the smokestacks to a nearby larger spot amidships with equally stunning views.

On Radiance of the Seas, RTKL/Snoweiss Design Group created two distinct nightclubs.  Starquest is a "futuristic" disco with revolving bar, while Hollywood Odyssey is a more mellow, intimate spot adorned with Hollywood memorabilia and featuring entertainment from comedians to jazz ensembles. In the years since, Royal Caribbean took some of the space in the Viking Crown Lounge to offer a Concierge Lounge and Diamond Club. 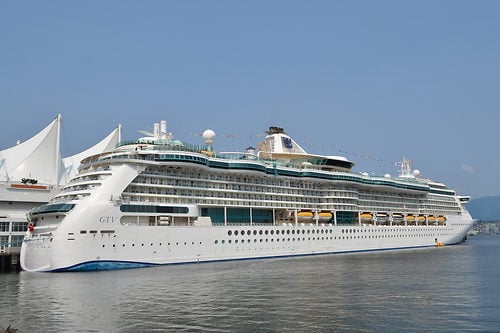 Have you ever noticed the large GTV initials painted on either side of the stern on Radiance of the Seas?

The initials stand for gas turbine vessel, which is an environmentally-conscious approach to ship propulsion.  Radiance of the Seas was the first ship in Royal Caribbean's fleet to have a General Electric gas and steam turbine as its primary source of power.  The power plant is more efficient and cleaner than traditional diesel-powered engines on most cruise ships employ.

The power plant on Radiance of the Seas consists of two gas turbines and one steam turbine.  The waste heat from each gas turbine is led through an HRSG (heat recovery steam generator), and steam from this generator is used by the steam turbine. Electricity generated by the turbines then powers the external propulsion pods, ABB Azipods,

Moreover, the ship is quieter and there are substantially fewer vibrations because the rotating engine on Radiance of the Seas does not create the same kind of vibrations as the reciprocating diesel engines used on other ships. 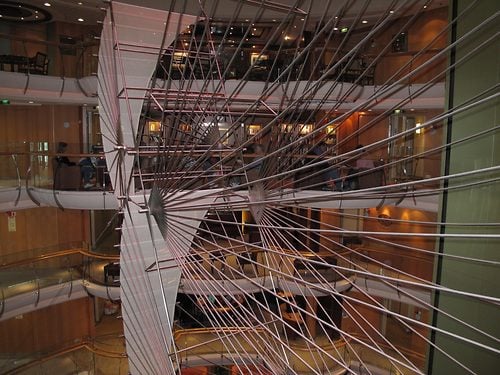 The art collection on Radiance of the Seas includes paintings, sculptures, and other pieces by more than 100 different artists from countries around the world, including England, the United States, Norway, France, Italy and South Africa.

The ceiling of the dining-room foyer has a mural of exquisite cumulus clouds painted by Carlos Ozzimo and Associates.

The electrifying centerpiece of the Centrum, spanning Decks 7 through 11, is the brilliant wire sculpture by artists Warren Seelig and Sherrie Gibson.  This delicately suspended, triple-arched geometric form, composed of softly sweeping translucent architectural mesh and radiating spokes, is meant to create an emotionally uplifting feeling, according to Seelig.

The 12-foot-high cedar totem pole carved for the ship by the famous Native American artist Nathan Jackson of Ketchikan, Alaska, stands guard like a sentry at the Mast Bar on Deck 12. According to Jackson, it tells the story "How the Raven Gave the World the Stars, the Moon and the Sun," from a book of Tlingit Indian traditions by Edward L. Keithahn.

There used to be a coffee and book shop onboard 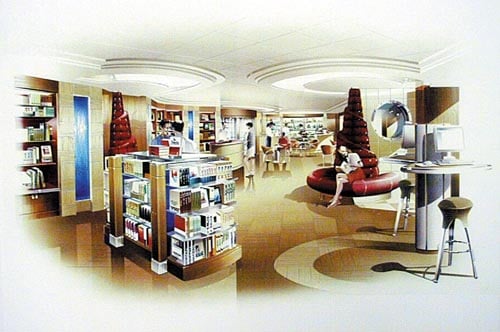 When Radiance of the Seas debuted, there was a novel space on deck 5 adjacent to the Photo Gallery, called Books Books & Coffee.

Books Books & Coffee was meant to evoke a hip coffee bar scene, with shelves of books and magazines to buy or browse, lots of seating, and four computer stations clad in brushed stainless steel and cherrywood veneer.

The space was touted as an ultramodern bookstore-meets-cafe-meets-Internet center inviting guests to read, shop, or surf the Net while sipping espresso or savoring a chocolate eclair.

In the years since, the bookstore was removed, and the space is now occupied by the Art Gallery. 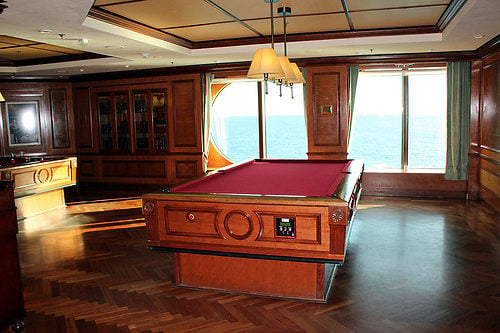 In the Bombay Billiard Club, guests will find a pair of self-leveling pool tables.

The tables are gimbaled on a motion-sensitive, motorized gyroscope that counteracts the ship's movements to keep the tables as level as possible.

At $90,000 each, Royal Caribbean wanted to offer its guests the most state-of-the-art diversions.

What is your favorite aspect of Radiance of the Seas? Did we miss a fact you know about? Share it all in our comments!

Royal Caribbean to call at the Kingdom of Tonga for the first time
Royal Caribbean announced it will offer cruise stops at the Tongan ports of Vava'u on December 12, 2016 and Nuku’alofa…