If you've been on a cruise before, more than likely, you've been to Nassau, Bahamas.  Nassau has become the ubiquitous stop for most cruisers due to it's proximity to the United States eastern shore cruising ports.  Many seem to have a love it or hate it opinion of the port but there's definitely good reason many ships make a stop here. 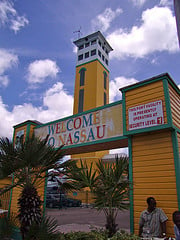 If you choose not to get off the ship at Nassau, be sure to look into deals on board the ship for deals as port days often bring better deals at the spa, among other locations.