Hi from Sitka today! I am currently blogging from our cabin because the seas are a little rough tonight. Captain said 9-12 ft waves can be expected as we sail from Sitka to Skagway and we will be sailing at (nearly) full speed. The Internet has been down all day on the ship, which is a bummer. Sydney and I started our morning early again at 6:30 AM and grabbed a latte at Latitudes. We made our way to the Solarium to watch as we pulled into Sitka. The scenery was incredible, as Sitka is tucked away in the forested, snow-covered mountains.

I enjoyed my morning coffee while Sydney walked around the top deck and took pictures. As we pulled into port, we headed to the Windjammer for breakfast. It was pretty busy this morning, but we could still find a table just fine.

Our plan for the day was to take the free shuttle into the city and then snag a taxi or Uber to Fortress of the Bear, which is a sanctuary and bear rescue in Sitka.

We got ready for the day and we were off the ship by 9:00 AM. The sun was actually shining! Praising the heavens above for good weather finally, we made our way through the cruise terminal and onto the free shuttle. 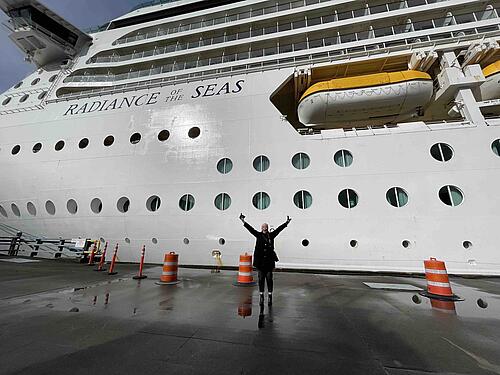 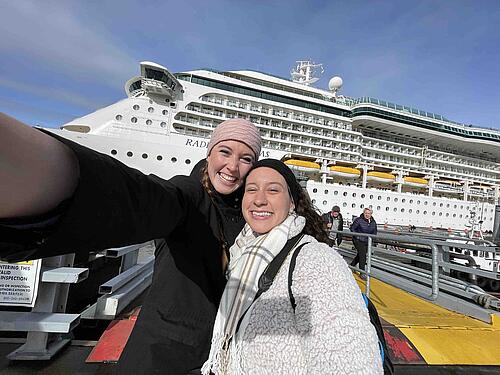 Our Uber and Lyft apps were showing that we could catch a ride for $15 from the city center to the sanctuary, so that was our plan when we arrived. 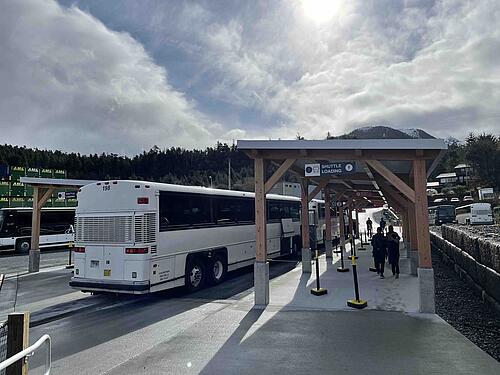 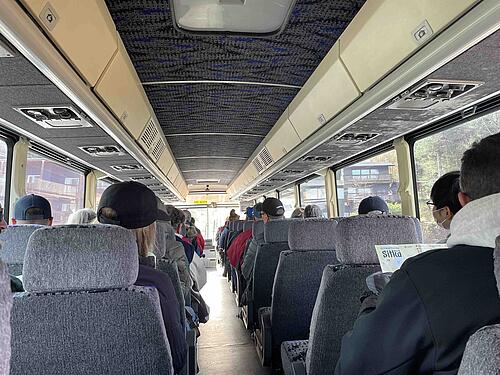 After getting off the bus, there was a taxi driver sitting there. She said it was $20 each way to get to the sanctuary. She scuffed at us when we said we were planning to take an Uber since that was a bit cheaper.

“There’s no Uber here” she laughed. Instead of trying to prove her wrong, we just gave in and had her bring us to the sanctuary. It took about 10 minutes to get there.

She also offered us a private tour for $100/hr with a 3-hour minimum. We laughed while politely declining. Here we are trying to save $10 by taking Uber (that might not exist) and she thought we might be interested in a $300 private tour.

I appreciate her business hustle, but that’s about as much as we spent each for this 7 day cruise, so she was definitely talking to the wrong cruisers.

Entrance fees for the bear sanctuary were $15 normally but we received a military discount, paying only $10 each.

The sanctuary was self-guided, so we walked from the counter out to a walkway. Right away we saw three black bears and listened to one of the stand members talking about the rescue and its mission. 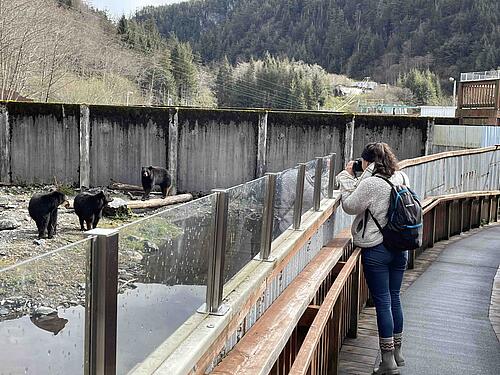 Each of the bears were orphaned as cubs and the sanctuary rescued them. Without the sanctuary, the cubs would have died in the wild.

The three of them have been raised together and live on an acre of land. They have plenty of area to roam, splash in the water and climb around. The staff said the bears are fed anywhere from 50 to 100 times a day depending on how hungry they are. 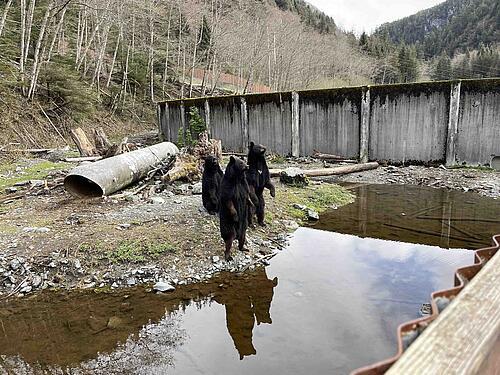 The sanctuary also had brown bears, which were much bigger. These were also rescued as cubs. With just 8 bears and a small staff, the sanctuary is able to have a very close relationship with the bears and understand their needs. 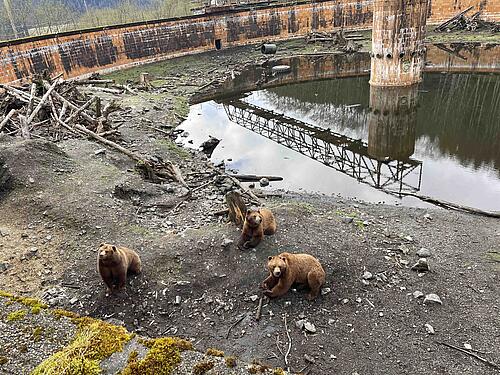 We got to watch the staff actually feed meat to the bears. It reminded me of my pups back home - they know instantly when it’s treat or meal time.

These bears are taught sign language to say ‘more’ and the staff tell the bears to ‘open’ their mouths before they get the meat. They also know ‘up’ and ‘paw’ commands.

Sydney took some amazing pictures of the bears during our time there. 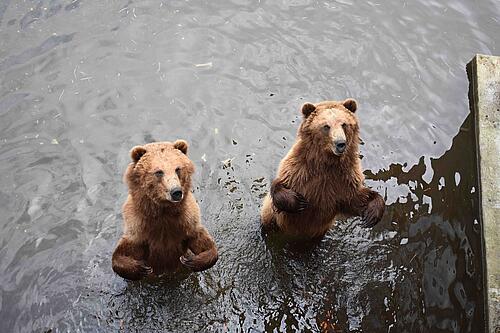 They explained how the bears are taught these commands so they can easily check on their mouth, paws, legs bellies, etc. Similar to dogs, the bears are rewarded with meat for listening to commands and this allows the sanctuary to provide veterinary services regularly.

The staff also explained how the bear’s lifespan is doubled by living in the sanctuary compared to those living in the wild. Essentially, these orphaned cubs are raised to be very spoiled bears who have a great life with attentive service and care. Sydney and I joked it was an all-inclusive resort for the animals.

The bears were very intrigued to see all of us there, as it was the first cruise ship of the season! Sydney and I were equally as captivated by these huge creatures. Since they’ve been raised around humans, they were very comfortable with everyone there.

We loved learning about the bears’ behaviors and interactions with one another. You could tell the staff care deeply about these animals and want to provide them the best life possible. 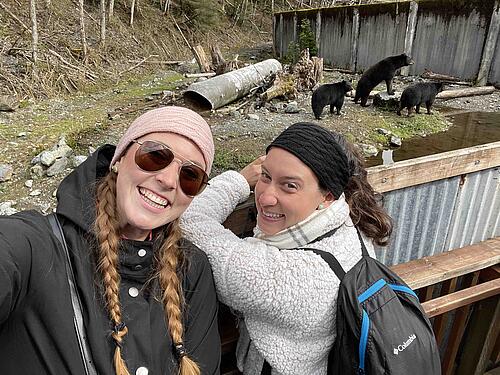 Bald eagles were also hanging in the tree during our visit. Apparently, they’ve been known to steal the meat right from the staff members’ hands. They hang around hoping to get some food as well.

I’d highly recommend a visit to the sanctuary if you have time in Sitka. Multiple tour groups were shuffled in and out while we were there, but we enjoyed taking it at our own pace. As someone who hates zoos and aquariums, I absolutely loved our time at Fortress of the Bear.

Taxi services are more limited in Sitka, so you can ask the staff at the sanctuary to contact one of the drivers to come get you. We also learned that you can take the city bus for $1 to the sanctuary. Of course, this has a few stops on the way out and back; but, that would totally be worth it for $1!

We spent $33 each for our day and could have easily done the city bus to do it way cheaper. Still a great value compared to any excursion offered.

After our two hour visit to the sanctuary, we took a taxi back to the city to walk around the waterfront and do some shopping. 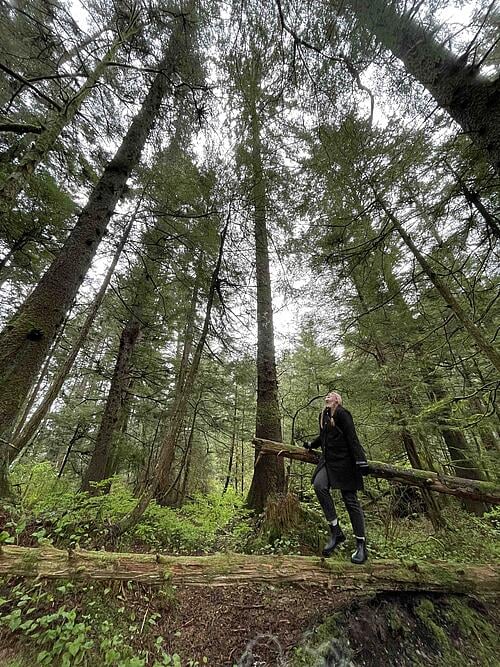 We snacked on some chips while enjoying the weather. It was cloudy and overcast, but at least it wasn’t raining. I wish I had brought a slightly warmer coat, but I challenged myself to only pack a carry-on for the week. 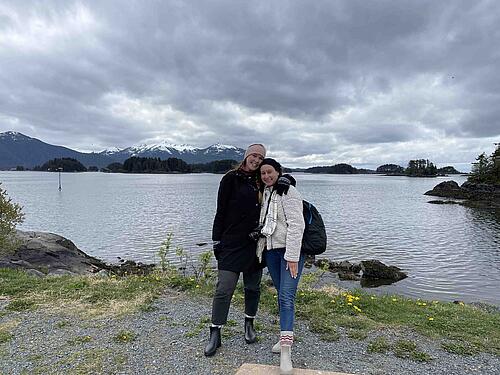 There’s a nice sidewalk that goes right along the waterfront in the city, so we walked along the path towards the Totem Poles National Park. It was a lovely walk on the paved path, although it was a bit chilly. The national park has a nice trail through some wooded areas that leads to a small creek and bridge. 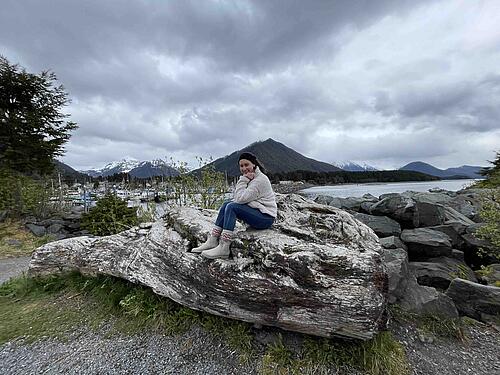 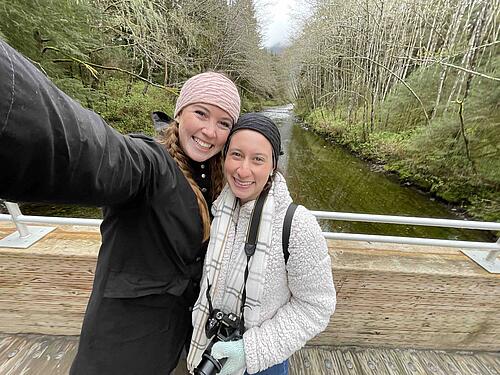 Once we arrived at the bridge, we turned back to town because we were getting a little hungry for lunch. We opted to do some shopping before catching the shuttle back.

There was a really cute store right across from the shuttle drop off. The employee was a fellow military spouse whose husband was in the Coast Guard and stationed there. She said it’s beautiful, but she was ready to move somewhere with more to do.

Come to find out she’s from Virginia (Sydney’s hometown) and will be moving to Panama City, FL (right near me). Such a small world!

We boarded the shuttle to head back to the ship. Sydney and I agreed that we’ve enjoyed getting up early, which is easy thanks for the time change, and spending our morning in port. It’s nice to come back and have lunch and relax before the evening.

Well, the world got even smaller when we found out the shuttle driver was also the trolley driver yesterday in Ketchikan. We laughed and told her that she had left us behind the day before! Of course, she apologized for leaving us behind.

I guess most of the tour drivers are seasonal workers in college who work in Alaska during the summer. She flew from Ketchikan last night to help drive the shuttles today.

Sydney and I came back to the ship and grabbed a late lunch while sitting in the Solarium. At this point, my phone was almost dead and the internet onboard the ship still wasn’t working. I was annoyed with technology in general, so I opted to take a nap in the cabin instead. 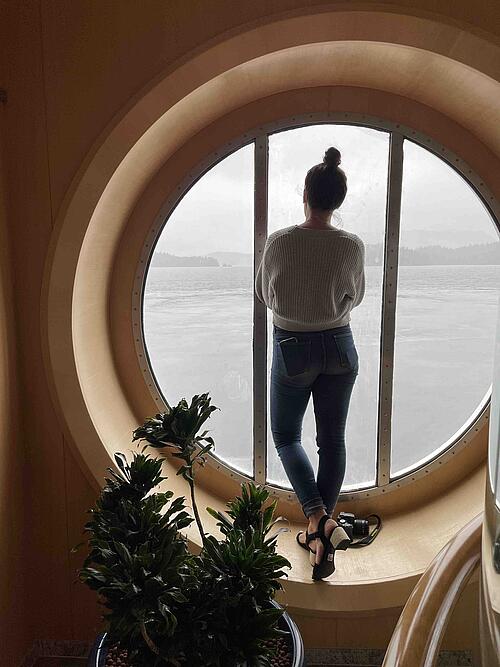 After my power nap, I checked with the Internet Service desk and apparently the Internet was down because the ship has bad reception while inside the mountains. He said it should get better as we head out to sea, but it’s still been out most of the evening. 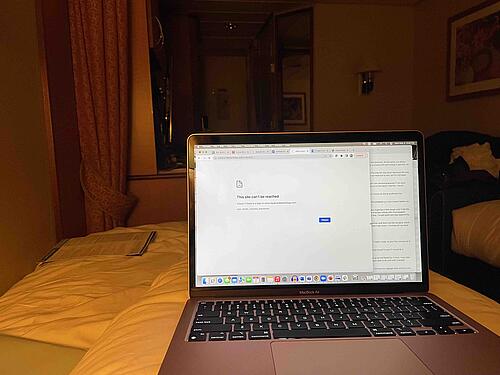 I am hoping to work while we are at sea on Wednesday and Thursday, but now I am second guessing if I will even have reliable service for that. If you’re planning to work remotely on the Radiance of the Seas’ Internet, I would definitely think twice.

The ship’s Internet would receive a reliability score of 6/10 in my book, so don’t count on doing anything time sensitive unless you’re in port and have service.

Sydney and I also stopped at the Diamond Lounge for the first time tonight. She grabbed us a few snacks before we went down to the Schooner Bar for a drink before dinner. 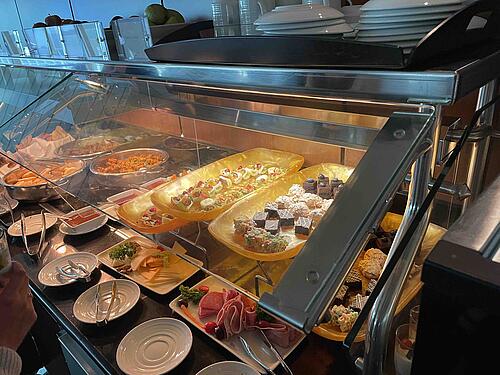 At this point, the Captain announced that the wind had picked up and our seas might be a little rough until 11:00 PM tonight. Sydney spent the first 4 days of our Semester at Sea in bed with sea sickness (along with most people) when we crossed the English Channel, so she popped some medication right way. I’ve got good sea legs apparently, so I opted for a mojito instead. 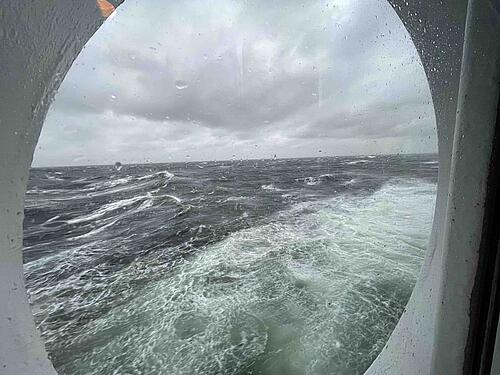 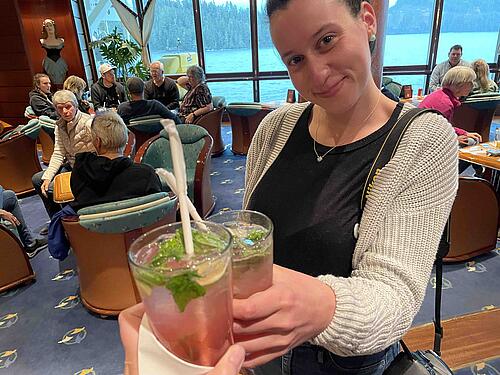 Dinner tonight was excellent. I started with the baked potato soup for an appetizer and then had the lasagna, which is a favorite RCL dish of mine. Sydney wasn’t feeling great at dinner, so she didn’t eat much. 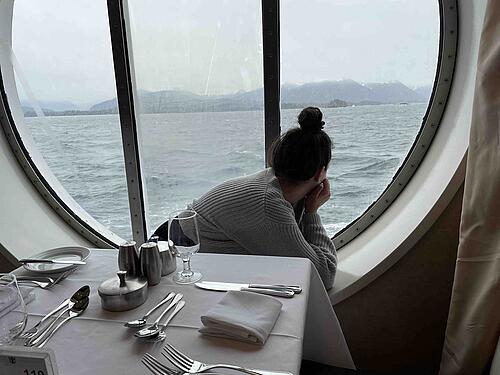 I finished off my meal with Royal Chocolate Cake, which was full of rich, decadent chocolate. 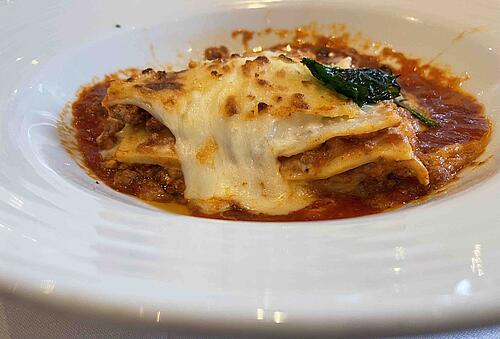 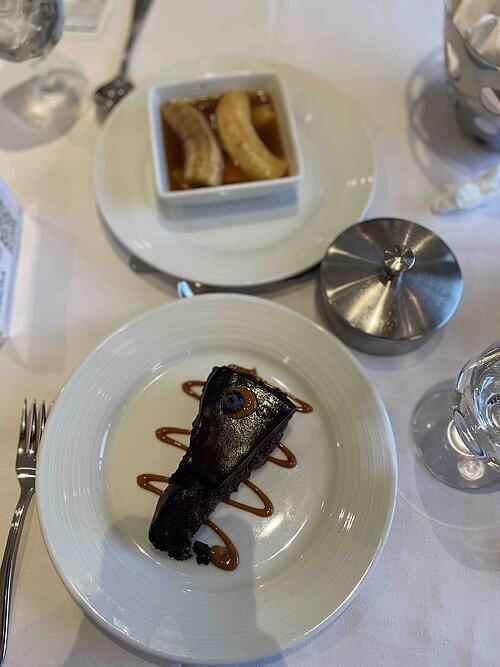 Sydney and I called it a night early because of the rough seas. With the internet down all day, I wasn’t able to finish the live blog. We’ve had 2 busy days, so an early night was just fine with us.