Restaurant Review: Chops Grille on Navigator of the Seas

Chops Grille on Navigator of the Seas isn't new to the ship but since the ship emerged from drydock in February 2014, they were the first ship to debut a brand new menu that if successful will be rolled out to the entire fleet.  We took it upon ourselves to try out the new menu to evaluate it for all of you (it's a tough job, but someone has to do it!). 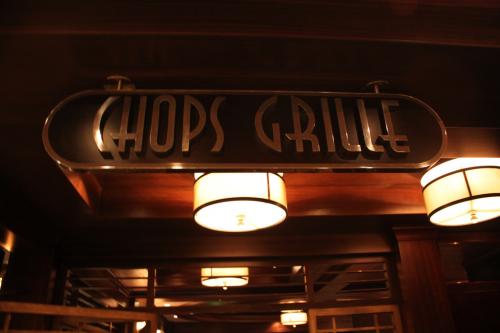 A little background first, Chops Grille has been renamed, "Chops Grille: The New American Steakhouse" and is decribed as marrying "contemporary flair to traditional steakhouse offerings".  What this means is Royal Caribbean wanted to match what land based steak restaurants are doing with adding dry-aged steaks to the menu.

Like Sabor Modern Mexican, this new change is part of a larger effort by Royal Caribbean's new head of food operations to bring more contemporary food choices to the cruise line.   And also like Sabor, Royal Caribbean is using Navigator of the Seas as a test for how guests react and if positive enough, will roll the changes out to other ships in the fleet.

The location and general decor of Chops Grille remains the typical dark wood with reds and gold you may be used to seeing at Chops. 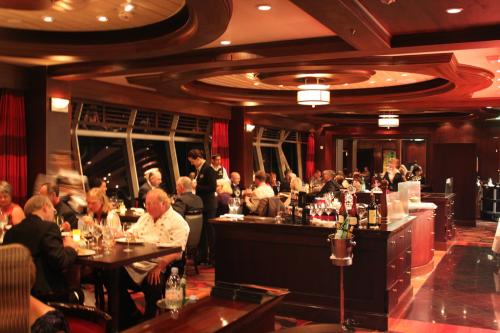 The restaurant on Navigator of the Seas has two distinct rooms that are connected, the first room is rectangular in shape and is what you see when you walk in, with a circular room attached to the end of the first room.

There was not much, if anything, noticeable that changed here since the refurbishment.  I can only assume the chairs or tables have been updated but it looked like the typical Chops Grille experience.

There is one wall of Chops Grille that is made up of glass that overlooks the ocean, but because it's night, the glare of the lights inside the restaurants makes seeing outside virtually impossible.

The menu at Chops Grille is where the changes have really occurred and aside from the dry-aged steaks, there have been minor menu changes.

We noticed some entrees and appetizers have been removed or changed.  As an example, there used to be two options for the filet mignon (6oz and 8oz) and now there is just one.  Most of the signature favorites remain on the menu. 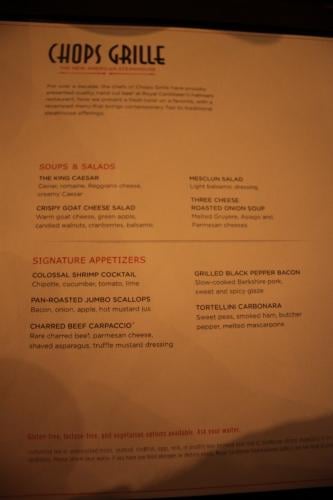 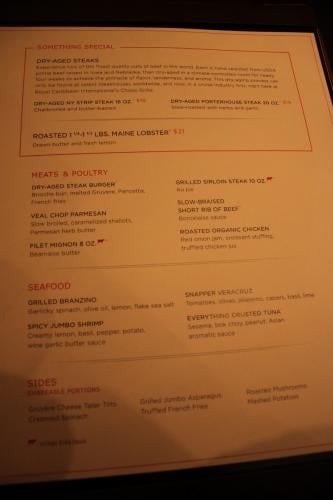 There are some new options to the menu such as the Veal Chop Parmesan, slow broiled with caramelized shallots and topped with parmesan herb butter, a Slow-braised Short Rib of Beef with Bordelaise sauce, and a Dry-aged Steak Burger served on a brioche bun and topped with melted gruyere and pancetta.

The big change is the addition of the dry-aged steaks. There are two new premium selections, a 16 Oz. dry-aged NY Strip Steak and a 20 Oz. dry-aged Porterhouse Steak (an additional $18 and $19 respectively), each USDA prime beef, dry-aged for four weeks to achieve the pinnacle of flavor, tenderness and aroma.

Royal Caribbean is touting the fact it is the first cruise line to offer dry-aged steaks to its guests.

Also new is the bread you are served when you are first seated.  Now you get a pretzel bread roll with spread (the salted butter spread appears gone).  Being a fan of pretzel bread, I liked the change and as far as I know, it's the only place onboard the ship to get pretzel bread. 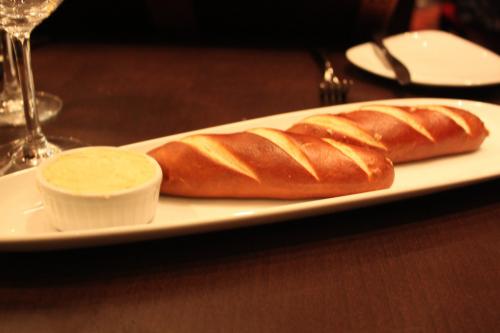 For appetizers, I started out with two favorites from previous trips to Chops Grille: the charred beef carpaccio and french onion soup. 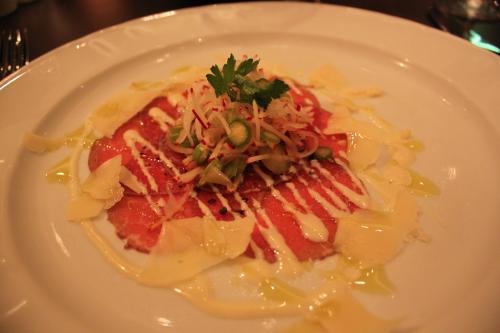 The beef carpaccio is very delicately sliced beef that you literally have to scrape off the plate to eat.  You certainly won't fill up eating this but it's mighty tasty and it's something I seem to always try. 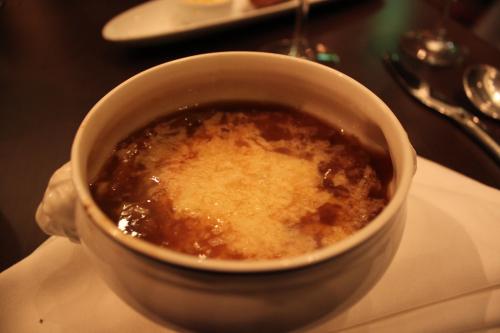 The french onion soup is always a good choice at Chops Grille too, especially when you compare it to the french onion soup offered one of the nights in the main dining room.  It doesn't taste like soup that came from a vat, and the baked cheese that sticks to the side of the bowl is just perfect.

My wife opted for the crispy goat cheese salad, something new to her, and found it good as well.  I prefer my goat cheese au natural (not fried) but I sampled a few bites and found it a good salad choice overall. 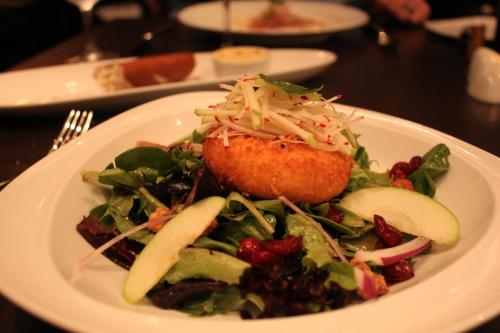 For the entrees, I felt obligated to try the dry-aged steak to see what the big deal was all about. For those unaware, dry-aged steaks is the process of hanging the meats and letting time and microbes do their magic to enhance the flavor of the beef.

Dry-aging beef takes time, usually 21-28 days, and as a result costs more money because the restaurant ties up cash in inventory that’s just sitting around, losing water weight and literally shrinking.  The benefit is the flavors get concentrated, similar to how a reducing sauce becomes richer.  It's become a big fad among steakhouses these days and Royal Caribbean wanted in on the action.

It will cost you extra to try the dry-aged steaks, about another $20 to be exact.  So your $35 meal jumps to $55 for just one person, but you are getting an opportunity to sample arguably one of the best cuts of steak at sea and when you factor in the appetizers and desserts you also get for the price, it's still not a bad deal overall.

I chose the dry-aged NY strip steak and as you might imagine it tasted really good.  Sometimes when I order steak I get halfway through and start to feel "steak fatigue", but this cut was quite good and I really enjoyed the whole thing. 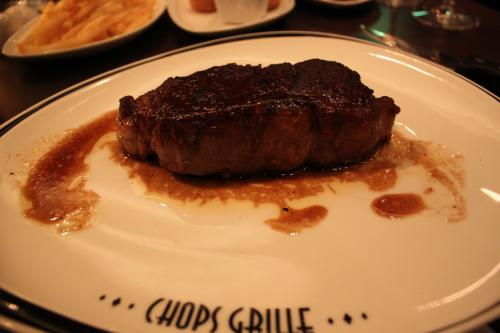 I'm by no means a steak expert or someone who knows steak well enough to really know if the extra cost was worth it but I figure if you are going to order steak, go with their best choice.  It certainly among the better steaks I've ever eaten.

My wife, far less adventurous than me, stuck with her tried and true filet mignon.  She reported it tasting as good as ever and that's one thing I really enjoy about Chops.  It's a very consistent experience and one place you can count on for an excellent meal. 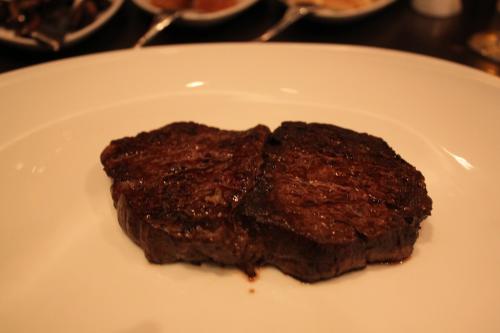 As I mentioned earlier, there were two new sides and we ordered both the tater tots and fries, along with mushrooms.  The tater tots weren't as good as they sounded but the truffle fries made up for the difference.  The mushrooms were great as always and remains one of my favorite sides at Chops Grille to have with my steak. 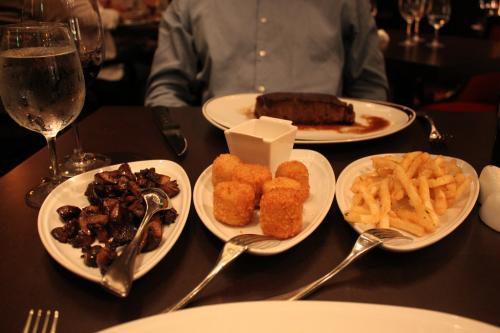 Dessert was next and of course I felt so full by this point, like I do every time I eat at Chops.  Nonetheless, we ordered some dessert to try.

My wife wanted to order just the fresh baked cookies but our waiter actually warned her to order something else too.  He didn't say the cookies were bad by any means, but that they were not nearly as good as some of the other dessert options. 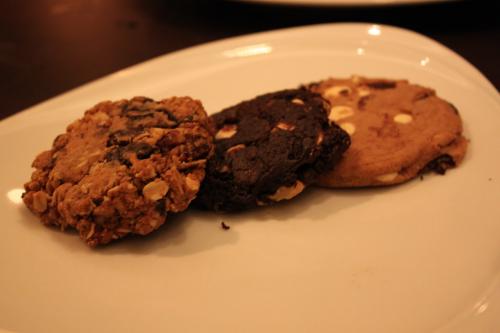 The cookies were better than what you could get anywhere else on the ship but the waiter was correct in that they were not overly special. 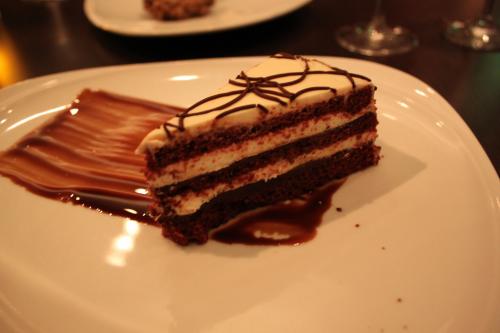 I went with my tried-and-true red velvet cake.  There had been rumors it was removed from the menu but it was available, although it did seem smaller and with less frosting than other red velvet cakes I've had at Chops.  Nonetheless, it's hard to go wrong with red velvet cake and I enjoyed it. 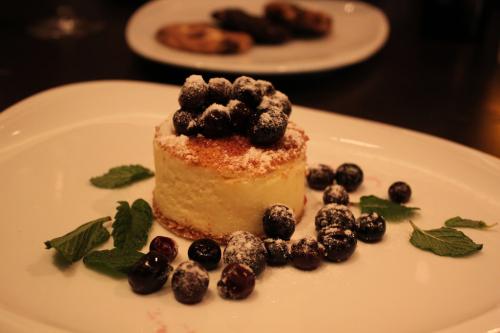 My wife ultimately chose the huckleberry cheesecake, which the waiter reported was not only new to the menu but also quite popular.  What I liked about it was the huckleberries were not baked into the cake, but just adorned on top.  Once again, the waiter was right that this is a great choice for dessert.

This visit to Chops Grille was about evaluating the new menu and seeing if this is something we think Royal Caribbean should expand to other ships and I think the answer is a definite yes.  I think the new menu offers quite a bit of choices that do not cost extra but for steak lovers, the dry-aged steaks are a real treat.

For me it came down to the cost of paying extra to eat at Chops Grille to begin with and then adding more cost for the dry-aged steaks.  Considering a very good steak on land would likely cost around $50 alone, it's still a good value overall considering you get your other food with it.

For Royal Caribbean, it will come down to how many people opt for the dry-aged steaks versus do not and if there are enough people ordering them, then perhaps we will see this option on other ships soon.

Restaurant Review: Chops Grille on Freedom of the Seas
There is no denying Chops Grille's place in Royal Caribbean lore as being the preeminent specialty restaurant of the…