In:
New ship Harmony of the Seas

Once the portico is complete, STX France expects the shipyard to begin construction of the new Oasis-class ship in the first quarter of 2014.

The new STX France portico, ordered specifically for the new Oasis class ship but will be used for other future builds, just arrived in Saint-Nazaire from China in the last few days.  It weighs 160 tonnes and measures 44 by 10 meters. 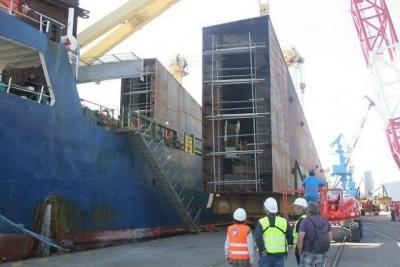 The old portico was built in 1968 and was one of the oldest in the world.