Steampunk themed cruise to be held on Navigator of the Seas

In:
Cruise Themes Navigator of the Seas

For fans of steampunk, there's a new cruise theme for you.  The Steampunk Cruise and Duchess of Nola High Seas Ball will be held on Navigator of the Seas on March 16, 2013. 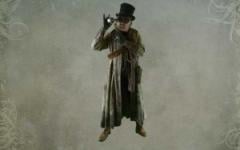 Steampunk is defined as Victorian science fiction, which is basically how industrialized 19th century people would have viewed science fiction.  Steampunk uses this existing technology and structure to imagine an even more advanced 19th century, often complete with Victorian-inspired wonders like steam-powered aircraft and mechanical computers.

Other events aboard the cruise include

More information on the cruise can be found at steampunkcruise.com

Elvis fans can cruise "with the King" on Royal Caribbean
For fans of Elvis Presley, there are a couple of Royal Caribbean cruises for you!Mahwey Productions is offering themed…

Second Zumba Cruise planned onboard a Royal Caribbean cruise ship
Following the success of the first ever Zumba® cruise, the dance-fitness group is organizing another group cruise…