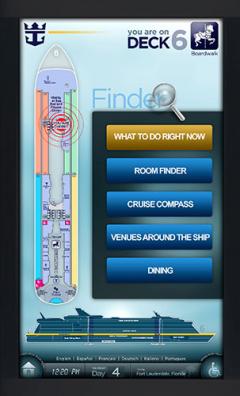 The LCD wayfinders were first installed on Royal Caribbean's Oasis and Allure of the Seas ships but have been rolled out to other ships in the Royal Caribbean fleet since. The wayfinders are interactive screens that enables customers, guests and employees to find their way around the ship using a touch-screen display. FWi designs and implements the software that makes these self-service kiosks work.

The Digital Screenmedia Association was impressed by the system, describing it as, “highly intuitive, yet complex passenger-facing communication network onboard Royal Caribbean’s newest, most technologically advanced cruise ships, Oasis and Allure of the Seas.”