The Governor of Alaska, Sean Parnell, signed into law a bill that reduces the state head tax on cruise passengers that will lower the head tax from $46 to as little as $19.50 per person.  The tax hike had caused cruise lines like Royal Caribbean to send their ships elsewhere to avoid paying the higher costs.  Loss of business as a result of the withdrawal is estimated at $25 million for Juneau alone this year. 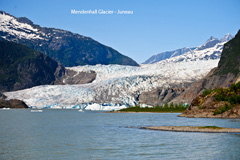 Last month, Alaska Governor Sean Parnell proposed the agreement to persuade several major cruise lines -- which claimed the tax was unfair and possibly illegal -- to drop a lawsuit they had filed against the state to contest the tariff, which was passed in a 2006 vote by Alaska residents as part of a larger initiative.

The new tax law comes into effect in October 2010, but it will be 2012 at least before ships can be re-routed as 2011 itineraries are already planned.