Voyager of the Seas makes maiden call at Manila, Philippines

In:
Voyager of the Seas Philippines Press Release

Royal Caribbean's Voyager of the Seas made her first visit ever to the capital of the Philippines this past weekend.  Voyager is one of the largest ships to call at any Filipino port.

Voyager of the Seas' visit to Manila was part of a 4-night sailing from Shenzhen.

"Royal Caribbean strives to provide every traveler with the vacation experience they deserve," said Ms Marilen Yaptangco, International Representative of Royal Caribbean International in the Philippines. "This quick stop on Philippine shores is an opportunity for us to showcase the world-class offerings of Voyager of the Seas to Filipinos."

Photos of Royal Caribbean's training facility in the Philippines

​Royal Caribbean sends its more than 11,000 Filipino crew through safety training at its facility in Marongondong, Cavite, Philippines.

Friend of the blog, John Roberts, sent us these photos from his recent tour of the facility. The campus offers courses on Basic Safety Training, Advanced Firefighting, Survival Craft Operations, Water Rescue and other related courses designed to help build the competencies of cruise staff in a wide range of maritime skill sets.

The conditions created during the exercises simulate actual shipboard scenarios.

John Roberts writes about cruise and fitness-based travel on his website InTheLoopTravel.com.

Philippine Ambassador to the United States Jose L. Cuisia Jr. issued a statement today about his meeting with officials from three cruise lines, including Royal Caribbean, to provide feedback on how the Philippines could become a cruise destination.

“The cruise giants were open to working with the Philippines in destination development while they discussed infrastructure requirements, “ Cuisia said after a recent economic diplomacy mission to the US state of Florida, where he met with cruise-company officials.

During the meeting, Cuisia took the opportunity to emphasize to the cruise-line executives the notable destination possibilities in the Philippines, particularly Vigan City in Ilocos Sur province, which is now vying to be one of the Seven New Wonders of the World.

Legend of the Seas docks at Puerto Princesa for first time

In:
Asia Legend of the Seas Philippines

Royal Caribbean's Legend of the Seas docked for the first time at Puerto Princesa in the Philippines today as part of the cruise ship's seven-night "Borneo Explorer Cruise".  The cruise includes stops at Kota Kinabalu and Bandar Seri Begawan. 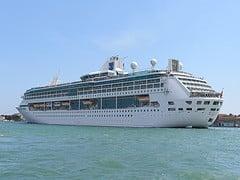 The city's mayor, Edward Hagedorn, and local government officials welcomed the cruise ship at the port.

“We are proud to add yet another destination in the Philippines… to Legend of the Seas’ Asian season for her guests to explore and experience. Our successful call at Puerto Princesa today is the result of the strong effort and support of the Philippines government in terms of infrastructure building which marks a positive step in cruise development for the country,” said Marilen Sandejas-Yaptangco, Royal Caribbean’s representative in the Philippines.

“The maiden voyage of Legend of the Seas to Puerto Princesa is historical and we are glad that the visitors can experience the scenic beauty and hospitality of our people which will boost tourism in our country,” added Mayor Hagedorn.

Puerto Princesa is located on the island of Palawan and is best known for its Subterranean River National Park, which is a UNESCO World Heritage site.