In defense of Royal Caribbean this week

This week hasn't been kind to Royal Caribbean's sister companies from the media front.  A passenger on Azamara Club Cruises was left behind in Turkey after breaking a hip and a Celebrity Cruises ship had to cancel the rest of its Alaska cruise season due to problems with its propulsion.  All this has the media foaming at the mouth and bringing up every catastrophe at sea since Titanic.  Frankly, in thise case I don't think it's justified.

The cruise industry is far from perfect and Royal Caribbean has made its fair share of mistakes but in this case, I really don't blame the company.  Because Azamara and Celebrity are owned by Royal Caribbean, Royal Caribbean gets lumped in with headlines like "Now It’s Royal Caribbean’s Turn To Make The Whole Cruise Industry Look Bad" or "Royal Caribbean strands injured American in Turkey".

In each of these cases, I understand why what happened, happened and I think Royal Caribbean made the right decision.  In the case of Azamara, I know if I hurt myself or get lost, the cruise ship will leave without me.  It's why on any excursion I take I get back to the ship a few hours early so it's not even a remote possibility.  But when the unthinkable happens and this poor passengers breaks a hip, unfortunately the ship must go on but they did the right thing by leaving them in a hospital rather than a glorified nurse station onboard the ship.

In the case of Celebrity cruises, the ship cannot move and opted to stay in port to try to make repairs, but when that looked bad, the company decided to cancel the remainder of the cruises for the season in Alaska.  They didn't try to push the envelope and see what happened if the ship would leave and risk leaving the ship adrift.  Rather, they did the right thing by forgoing profit and making sure the ship got fixed.  But of course, the media quickly points to this is "another broken cruise ship".

Let's not forget the media loves stories like this because it's a rating bonanza.  They put out ridiculously inflamatory headlines to get viewers/clicks and then scare everyone with these horror stories. And then they list every ship that's ever had problems at sea.

Frankly, I think what we need to recognize as Royal Caribbean fans is that while the news affects our sister companies, it's still a blemish on the crown and anchor's reputation and blown out of proportion, as per usual.  This the kind of media hype that makes these stories seem far worse than they are and given the circumstances, I believe Royal Caribbean did the right thing.

The preceeding is an op-ed by Royal Caribbean Blog blogger Matt Hochberg.

Did Royal Caribbean go too far at Tony Awards?

Royal Caribbean has made quite an impact on the Broadway community after Sunday's Tony Awards, when Oasis of the Seas' production of Hairspray was performed live during the annual award ceremony. 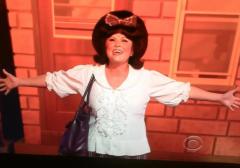 Some are saying the spot, which Royal Caribbean paid the Broadway League for the time, was an example of product placement gone too far.  Royal Caribbean and the Tony Award organizers are defending the act as a good fit.

The bit began with actor Harvey Fierstein walking on stage wearing a tuxedo jacket, a blue plastic inflatable inner-tube hugging his stomach, pink swim trunks, and hoisting a cocktail glass sporting a tiny umbrella.   Fierstein promoted Royal Caribbean's Broadway productions on select ships in the fleet and then we were shown a live show from the Beacon Theatre aboard Oasis of the Seas, where the sailing troupe of performers entertained audiences with two numbers from "Hairspray."

Charlotte St. Martin, executive director of the Broadway League doesn't think there was anything wrong with the sponsorship, "We thought it worked. They are a sponsor, they paid us to do it, and we felt that it was a good fit for the Tony Awards.  One of our goals is to spread the message about Broadway and make theater more accessible to people."

She added that this wasn't the first time the producers have tried to liven up the program, once simulcasting a musical number from Times Square. The cruise-line promotion, in the works for nearly a year, was simply a bid to reach new theater patrons, she said.

Royal Caribbean spokeswoman Lyan Sierra-Caro was also happy with how the production went, "We were very excited to bring our world-class entertainment to the millions of viewers watching last night's Tony Awards.  We also are thrilled to have partnered with the Broadway League to showcase the Broadway shows we offer onboard our ships."

On the flip side, many writers, social media commentators and others thought the spot was too much of a commercial.  Others in the theater community were more upset about the fact nonunion actors were used.

What do you think?  Was the Royal Caribbean spot tasteful?  Or was it a case of advertising going too far?

The terrible tragedy of the Costa Concordia has raised a lot of questions about cruise line safety and even the notion of are the big cruise ships that cruise lines like Costa, Carnival or Royal Caribbean sail still safe.  While there is no doubt in anyone's mind that what transpired in Italy with the Concordia was absolutely awful, I think it's time to rid ourselves of the notion that cruise ships aren't safe. 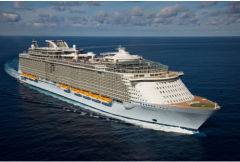 Here's a question: name all of the large cruise ship disasters you can think of ever.  Okay, there's obviously the Concordia and the Titanic.  But that's all I can think of.  The media is in a frenzy over trying to scare the public with these headlines of "Too big to sail?" or "How safe are our cities of the sea?‎" and they make it seem like large superliner cruise ships are sinking regularly.  Don't be fooled, the media is just looking to get as much web page hits and viewership numbers as possible since it's a story that a lot of people have shown interest in.

First and foremost, the Concordia disaster appears to be human error.  It wasn't like the engine blew up or the ship's guidance system veered off path or some other technical glitch. Rather, the Captain chose a path too close to shore.  It's no different than if an airline pilot decided to change the plane's altitude on his own. Had the Captain chosen a different route, the Concordia would likely be wrapping up her sailing for this week.

As a frequent passenger with Royal Caribbean I've always felt safe on their ships.  Unlike the Concordia, Royal Caribbean mandates their safety drill occur before sailing.  And I know I've seen the crew practicing using the life boats or other emergency procedures at least once a cruise while in port somewhere.

While you can make an argument about the cruise lines' reputation for looking the other way for personal safety over the years, I disagree that these mega ships we sail on are in any way flawed.  Given the track record for cruise ships safety, especially over the last twenty years or so, I think the idea that large cruise ships are unsafe is absolutely wrong.

Why Shrek isn't as important as George Washington

Earlier today, Royal Caribbean and Dreamworks announced their "strategic alliance" together to bring select characters from the Dreamworks film library to Royal Caribbean ships.  The obvious conclusion many have made from the deal is that the move is to counter Disney's character driven ships along with Norwegian Cruise Lines' addition of Nickelodean characters to their ship.  The idea seems great and obviously a push to convince families to sail on Royal Caribbean, but I think there's more here than just the characters and Shrek and his pals are merely the icing on a cake that has been baking for a while.

To the average observer, it seems like the Dreamworks deal with Royal Caribbean is a grand plan to add characters to the ships and get families to book with Royal Caribbean instead of other ships.  That makes sense....if all the cruise line prices were the same.  Considering that the Norwegian deal with Nickelodean was signed less than a year ago and in the press conference Royal Caribbean mentioned the deal with Dreamworks had been in discussion for longer than that, the move looks more like an attempt to counter Disney.  After all, Disney is the leader among children branding and what kid doesn't want to be on a ship with Mickey, Minnie, Donald and friends?

There's just one little problem for parents who want to take their kids on a Disney ship. Price! Disney cruises are almost always more expensive than a typical Royal Caribbean cruise of equal length.  Disney justifies the higher price by calling it "the Disney difference", where their premium branding commands a higher price tag.  If you're planning the next family cruise, it's hard to convince the kids that a cruise on Royal Caribbean is a better deal when the kids just care that the Disney ship has lots of characters and other fun related activities.

With the Dreamworks deal, it gives Royal Caribbean some collateral to work with in the ever competitive task of marketing to kids.  Now, they can flaunt characters from Shrek, Madagascar and Kung Fu Panda, films that have resonated with this generation of youth, and so when parents have to plan their next cruise, it's a far easier sell to kids with these contemporary characters and the price difference between Disney and Royal Caribbean should be big enough for most to look to Royal Caribbean.

The alliance has a lot of hype going with it as Royal Caribbean is proud of the deal, but I really see the deal as being that final piece in the puzzle that they needed to get families to choose Royal Caribbean over other lines that have traditionally done well to attract the family demographic.  If now you have the kids begging their parents to go on the ship that Shrek is on, I think it's a far easier sell for families to book it, especially given the price difference.  Disney's prices were decent when times were great, before the great recession.  Today, it's a different financial landscape and if you can save a few hundred dollars, it's well worth it and now, families don't have to sacrifice the things that kids love too.