In:
Independence of the Seas Royal Amplified
By:
Matt Hochberg

Royal Caribbean's Independence of the Seas will be the first Royal Caribbean ship to receive the Skypad virtual reality trampoline during her Spring refurbishment. 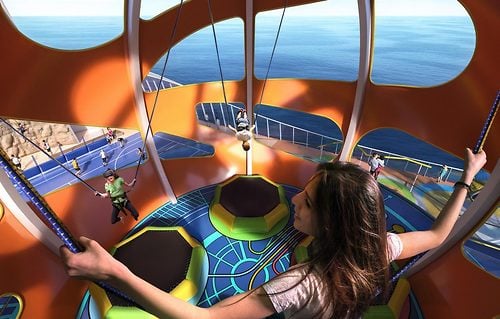 According to TTG, Royal Caribbean CEO Michael Bayley announced that Independence of the Seas will have a Skypad, which is made up of four trampolines that have guests don VR headsets while in a bungee harness.

In a press release about the Skypad coming to Mariner of the Seas, the experience is described as, "Guests will strap in and don their virtual reality headset to transport them to another time and planet to bounce over moon craters or compete in intergalactic games. The out-of-this-world experience is for guests of all ages, and also can be enjoyed without virtual reality headsets, for those who prefer to look out over the ocean as they leap toward the sky."

The addition of Skypad will take place during an April 2018 refurbishment, and is part of Royal Caribbean's Royal Amplified fleet-wide modernization initiative.