A look back at how Royal Caribbean weathered Hurricane Andrew

Hurricane season in the Atlantic begins on June 1st, and the start of this potentially impactful time of year got us thinking about a major hurricane that directly impacted much of Royal Caribbean's operations.  Hurricane Andrew ravaged South Florida, and the story of how Royal Caribbean responded to the storm is an insightful reminder of the lengths at which the cruise line goes to keep its guests and employees safe.

The story of how Royal Caribbean dealt with Hurricane Andrew is documented in the book Under Crown and Anchor: Royal Caribbean Cruise Line: The First Twenty-five Years, 1970 - 1995. This blog post borrows greatly from the author's retelling of historical events, as the events that unfolded that summer in 1992 are incredible to read about again. 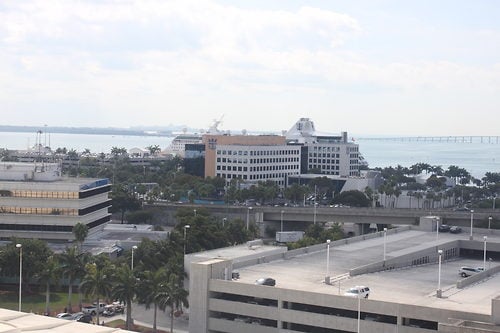 Weather forecasters at the National Weather Service had been following the path of Andrew long before it would strike Florida, with a prediction of landfall at four o'clock on August 24, 1992. Majesty of the Seas was on her usual schedule of being docked at Berth 5 in Miami the day before.  Majesty departed port an hour late, but Captain Eigil Eriksen stayed with his plan to get away from the storm's path as quickly as possible.

Shortly after Majesty left, Miami's port and airport were closed, along with Royal Caribbean's headquarters building.  Royal Caribbean's Vice-President, Purchasing, Properties & Logistics Ed Bollinger headed up a a small group of 15 employees from reservations and operations that flew to Atlanta to set up a contingency headquarters at the Hyatt Hotel.  The plan was for them to maintain communications in the event Miami's facility was incapacitated or destroyed. Royal Caribbean had adopted a hurricane preparedness plan after seeing the destruction Hurricane Hugo had leveled upon the United States Virgin Islands in 1989, and this was plan unfolded precisely as was laid out for the impending arrival of Andrew.

In the meantime, other Royal Caribbean workers spent the weekend before the storm preparing the headquarters building at 1050 Caribbean Way. Royal Caribbean's headquarters is the only major Miami cruise-line office positioned within reach of its vessels.  Ordinarily, this helps provides a tremendous ship-to-shore link, but with a storm heading directly for Miami, it was now a liability.  Literally everything that makes Royal Caribbean function is in that building: operations, reservations, ticketing, public relations, corporate offices, human resources, entertainment. The building was considered, "hurricane proof," but Director of Facilities Barbara Cirino described the risk posed succinctly: "Our data center was surrounded by water in a building made of glass."  Ultimately, Richard Fain made the decision to take the facility down completely.

Forty-eight hours before the storm, a Hurricane Team Meeting was called. At thirty-six hours, ground-floor files were removed and plastic bags and labels distributed.  At thirty hours, mail delivery was halted, food removed from the cafeteria, and filing cabinets wrapped.  Over 4,000 sandbags were filled and on standby in a neighboring warehouse. While all of Royal Caribbean's ships were at sea by now, Nordic Empress (later known as Empress of the Seas), was moored for the day in Nassau. Ordinarily, Nordic Empress would spend the next day off CocoCay before arriving in Miami on Monday morning. Prior to Royal Caribbean shutting down headquarters, the plan was for her Nordic Empress to return to Miami and disembark her passengers before conditions deteriorated.

However, with the change in plans back at headquarters, Captain Kjell Smitterberg agreed to depart Nassau hour hours early.  Nordic Empress left at midnight, leaving behind three passengers who were unwilling to sail anywhere near a hurricane.  She skipped CocoCay and raced for the mainland.

The following day, Andrew's winds escalated to ninety knots and its center began moving westward at fifteen knots.  Wind speed accelerated to over one hundred knots. 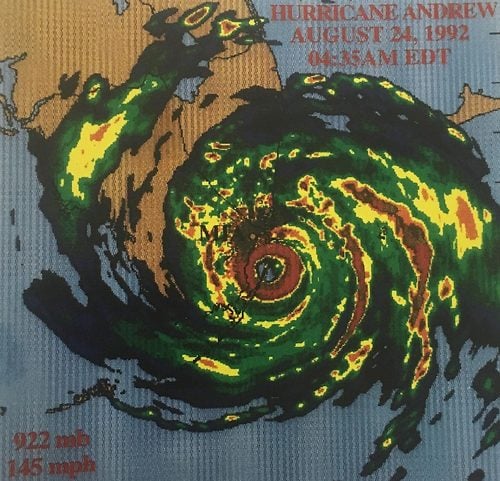 By Sunday, the lobby entrance was chained and padlocked, with a sandbag rampart laid across the still. The team of Royal Caribbean employees evacuated the area to secure their own homes.  Later that afternoon, Dodge Island (the location of Royal Caribbean's headquarters) was evacuated and closed down.

Out at sea, Nordic Empress was seemingly followed by Hurricane Andrew, with both taking a westward track towards Miami. At nine o'clock, Nordic Empress received new instructions to change course ninety degrees, taking her south.  Captain Smitterberg headed through the Straits of Florida and spent the next two days idling along Cuba's northern coast through calm seas.

Of course, the guests aboard Nordic Empress were still worried, since many of them were from the greater Miami area.  The ship's radio-telephone capacity was taxed with everyone trying to call home.  Smitterberg understood the concern, and circulated a printed document advising guests of Miami's shutdown and that were were well out of harm's way.  Additionally, he announced, Tuesday, rather than Monday flights home were being booked at that very moment.

Monday morning, it was discovered the port had suffered minimal damage, and Royal Caribbean's headquarters had weathered the storm beautifully. Remarkably, power had never been lost.  It was essential that the Data Center be air-conditioned before the computers be turned back on, which the team did, all the while with just the windows and doors open until the air conditioning could kick in. Tap water was undrinkable because an above ground main had been fractured and no city water was potable.

Royal Caribbean's team worked through until 2:00am Tuesday morning, bringing the building back up. In all, the facility suffered approximately $200,000 worth of damage with mostly wind damage causing leakage of subsequent rain. 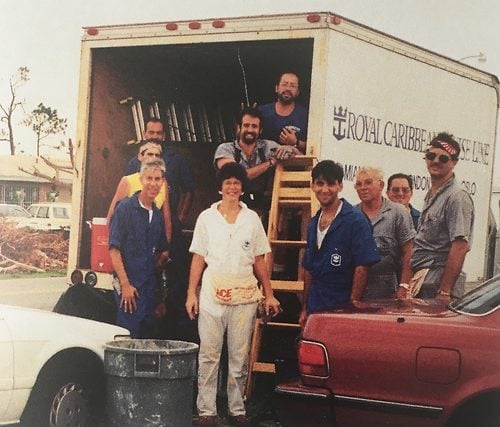 The day after the hurricane, Tuesday August 25, Nordic Empress was due at Miami's pilot station at 0600 hours.  Miami was under a citywide curfew until 7:00am, which meant Royal Caribbean employees dealt with a number of delays reaching the terminal because of the police.

Pier 5 had been damaged, so Nordic Empress moored at Berth 4 instead. Passenger disembarkation was slow. Line handlers were scarce and Customs and Immigration personnel arrived late for the vessel's return.

Nordic Empress would remain tied up at Pier 4 for the rest of the week.  Her next scheduled 4-day cruise was canceled.  While disembarking Florida passengers could drive home, those with air destinations were stranded: Airport schedules were chaotic, partly because evacuated planes from Miami had to return before service could resume.  So many out-of-state passengers simply remained on board. Reservations had alerted most Miami-bound passengers of the cancelation of their 4-day Nordic Empress cruise, however, those who showed up were permitted to embark.

Yet a third category of impromptu passenger was welcomed on board, homeless company people.  Their houses and possessions had been destroyed, and all sense of stability had vanished. For those directly impacted by the storm, Nordic Empress was their temporary home.

Richard Fain organized a great deal of Royal Caribbean's response effort in those hours after the storm.  At an early emergency meeting, Fain called for a company day-care center within twenty-four hours.  The plan was put into place the following day at the adjacent Terminal 12.  By week's end, a hundred children were accommodated. In the company cafeteria, the distribution of donated clothing was organized.

Additionally, company-subsidized assistance programs were established for employees in need.  For those without insurance, Royal Caribbean underwrote low-cost construction loans; storage was arranged for household goods; counseling was offered for the traumatized; a check-cashing service was instituted until damaged ATM machines were repaired; generators below cost were provided; and special car-rental rates were established for employees without working automobiles.

In addition to being a hotel, Nordic Empress proved to be an irreplaceable source of ice.  Miami had none.  All employees received a daily ration of a gallon of ship's fresh water and five pounds of ice. Twice daily, ice and food were sent from the vessel up to the day-care center and to the cafeteria, where employees ate free for the week. Other Nordic Empress ice went to hospitals.

So taxing was the demand on Nordic Empress's freshwater supplies that Captain Smitterberg had to return to sea.  The city's water mains were still tainted and the vessel's reverse osmosis converter needed pure seawater to operate.  Royal Caribbean requested permission from U.S. Customs for Nordic Empress to depart temporarily, so passengers on board enjoyed a bonus cruise to nowhere. The vessel sailed Wednesday evening and returned the following morning. Overnight, she sailed 374 nautical miles up and down the coast, and her freshwater tanks were brimming.

Nordic Empress would sail on her regular 3-day cruise Friday afternoon, leaving in her wake a port and company headquarters returned to operational status.

The story of Hurricane Andrew and how Royal Caribbean dealt with the storm is a testimony to the resilience of the people that survived and rose beyond that cataclysmic event. At the time, it was America's worst natural disaster and yet Royal Caribbean handled each phase of the event remarkably well.

Every June, hurricane season approaches and the preparedness program devised and enacted for Hurricane Andrew continues to be a diligently rehearsed plan.

Harmony of the Seas changes itinerary to avoid Tropical Storm Fiona
The Atlantic hurricane season has been quiet thus far, but it's claimed an itinerary change for at least one cruise…