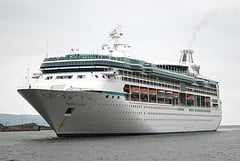 Vision of the Seas will sail a nine-night Southern Caribbean itinerary from Port Everglades in Fort Lauderdale, Fla. on November 6, 2014, to Tampa, with calls at Aruba, Curacao, Grand Cayman and Labadee, Royal Caribbean’s private beach paradise on the north coast of Haiti. Beginning November 15, Vision of the Seas will sail every Saturday from Tampa to destinations in the Western Caribbean, including Grand Cayman, Cozumel, Costa Maya, Roatan (Honduras) or Belize.

Port officials are excited to welcome an additional ship to Tampa, which has been home port to Royal Caribbean ships since the first ship, Rhapsody of the Seas, called in January 2002.

Vision of the Seas is planned to recieve a refurbishment in September 2013, which will match Brilliance of the Seas' refurbisment that took place in May 2013.

Royal Caribbean is first cruise line to restart cruises from Tampa
The cruise industry restart has reached the Port of Tampa. Royal Caribbean's Serenade of the Seas arrived in Tampa…

Tampa Cruise Port: Embarkation, parking, directions & more
The Tampa cruise port is a very convenient port of embarkation, located on the west coast of Florida and offering many…