Royal Caribbean cruises out of Baltimore are expected to continue despite a potential labor strike at the port. 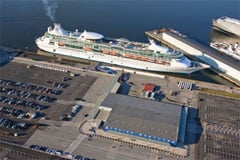 The International Longshoreman's Association and the U.S. Maritime Alliance are working against a December 30th deadline to reach a new labor agreement.  A strike or lockout have been threatened by both sides if a deal is not reached in time.

Cruises would continue under a International Longshoreman’s Association strike. A lockout, however, threatens to shut down all business at the Port of Baltimore.

It is unlikely the International Longshoreman’s Association and the U.S. Maritime Alliance reach a deal before Sunday’s deadline, said Douglas N. Wolfe, general manager of Ceres Marine Terminals Inc. at the Port of Baltimore. Ceres employs about 170 cargo and container handlers at the port through the ILA, Wolfe said.

Wolfe says that the Port of Baltimore will find a way to get passengers and their bags on those cruise shipss even if there is a lockout.

“I don’t see the cruise business being affected,” Wolfe said. “It think people will go on cruises. I know my company is dedicated to getting people to work.”

Mary Joan Levin, owner of the Baltimore-based travel agency Royal Travel Planners, said cruise lines would likely bring in their own workers or fly passengers to other departure ports in case of a lockout.  Either way, she hopes cruising will continue in the face of a possible strike or lockout.

Baltimore will reopen cruise port on Saturday
We have another positive sign the U.S. cruise industry is moving towards re-opening.Maryland Governor Larry Hogan (R-MD…