Royal Caribbean will remain in Barcelona through 2013

Royal Caribbean has committed itself to serving the port of Barcelona, Spain through 2013 and will make about 50 stops next year. 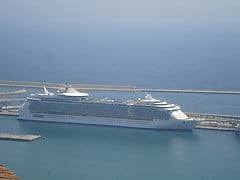 The news comes after Royal Caribbean opted to drop other Spanish ports such as Malaga, Valencia and the Balearic Islands will be dropped in 2013.  Royal Caribbean has promised to re-evaluate the situation in 2014 but for now, Barcelona remains a key port of call for Royal Caribbean in Spain.

In 2013, over 20,000 cruise passengers will call at Barcelona on Royal Caribbean ships that are based on other ports and that will mean about 1.2 million euros spent in Barcelona by tourists.

7 tips for a great Royal Caribbean Baltic cruise
Please welcome Dr. Kris Leppien-Christensen as our guest blogger today! He is sharing insight and tips from his recent…