Chocolate anyone? Report from Legend of the Seas featuring award winning chocolatier

In:
Legend of the Seas Desserts Chocolate

Royal Caribbean's Legend of the Seas recently feaured award-winning chocolatier Then Chui Foong was aboard the cruise ship to create a chocolate sculpture in an exclusive demonstration, which had never been done at sea. 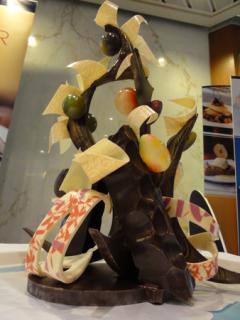 TODAYOnline was able to sample the chocolate offerings aboard this ship, such as a cherry on the ile flottante (a French dessert called "Floating Island").

Foong described the art of making chocolate sculptures and the challenges that come with it, "Making a chocolate sculpture is very technical, and I was without the usual equipment and utensils.  But I overcame that by using the most basic techniques - just hot water to melt the chocolate slightly and to adjust the temperature quickly, so that I could assemble the showpiece in half an hour."