Adventure of the Seas move to Europe required onboard changes

In:
Royal Caribbean Europe Adventure of the Seas Mediterranean

Royal Caribbean has moved a lot of its ships to Europe, primarily from the Caribbean, and in a recent Royal Caribbean blog post, there was an interesting tidbit about what changes Royal Caribbean made to it's Voyager class Adventure of the Seas ship to be more accommodating for the European clientèle. 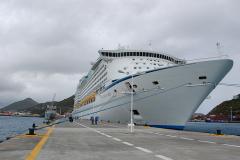 Adventure of the Seas had spent nine years in Puerto Rico, serving the south Caribbean since 2001 but was moved to Europe and the Mediterranean to help with greater demand in the area.  Because the ship was going from the Caribbean, where its customers spoke primarily English, to the Mediterranean, where a greater variety of languages were spoken, changes were necessary.  The biggest changes included ensuring Adventure of the Seas had "the appropriate language skills".

Other changes were made as well, such as changing the entertainment so it was less about language and more about the visual story being presented.  This ensured a greater percentage of guests onboard the ship could enjoy the entertainment.  To accomodate guests even further, dining times were adjust to allow for the greater demand for later dinner seatings.