Royal Caribbean signed an initial agreement with Taiwan International Ports Co. (TIPC) worth $33.3 million to build a cruise ship pier in outlying Penghu County to allow the company's cruise ships to dock there. The deal is a joint venture, with Royal Caribbean having a 51 percent stake in the investment and state-owned Taiwan International Ports Corporation holding the remainder.

The new pier will be complete in 2016 and will allow for cruise ships as large as Oasis of the Seas to dock there.

The pier will be Royal Caribbean's first construction project in Asia.

TIPC says the new project will not only boost travel to Penghu but will also raise Taiwan's profile as a cruise destination, as it is likely to increase the number of tourists visiting the country's other ports such as Keelung, Taichung, Kaohsiung and Hualien.

Penghu announced plans to build a cruise port back in February

The Penghu islands, off the coast of Taiwan, are the subject of new construction plans to build a cruise port to meet increasing demand by cruise lines as outlined by Taiwan's Ministry of Transportation and Communications. 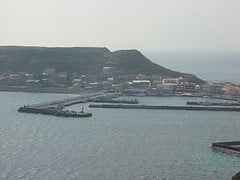 The new plans will be proposed soon with the hopes the new port would make Penghu a destination for international cruise lines such as Royal Caribbean.  The plans aim to accomodate Royal Caribbean because the company has expressed interest several times to dock in Penghu.

Penghu has long fought for the relocation of the military base on the archipelago in order to make way for an international harbor.

The plan is to enlarge and add infrastructure to the current harbor and should take two years from the start date.

Royal Caribbean to invest in Taiwan port of Penghu

Local media in Taiwan are reporting that Royal Caribbean plans to propose a development plan for the port of Penghu Jinlongtou, which could be a new homeport in Asia for the cruise line.

Jinlongtou port currently belongs to the Taiwanese navy, and the navy has agreed to hand over the port and transfer its base to another port.

Royal Caribbean is expected to propose a development plan by the end of January.