Debate over new port in Belize heats up

Earlier this month news came out of Royal Caribbean was considering building a new cruise port in the country of Belize near the village of Placencia.  Belize government officials confirmed last week that Royal Caribbean Cruise Lines wants to build a “tourism village” and the debate among locals is heating up over if it's a good idea or not.

The Belize Ministry of Tourism chief executive Mike Singh indicated that Royal Caribbean plans to build a facility on the southern point of the peninsula as “a welcome center for tendered cruise passengers.”

Once word of the plans came out, locals have voiced their opinions and often, their anger over the plan.  Many do not want cruise ships to stop in their village for fears of environmental damage, lack of infrastructure to support the tourists, and revenue from the cruises not impacting locals.  In just a blog entry on this site earlier, over 30 comments were generated mostly by locals who were against the plans.

"Placencia Village is way to small to receive passengers from cruise ships."

"Revenues from this will go to a very select few, not Placencia. Tour companies and the terminal will be owned by people who are already rich!"

"Stay away from Placencia! We have no sewage system, no hospital, no fire department, few police, one doctor, one nurse, maybe not enough water (we don't know) - we simply can't handle cruise ship passengers."

"Placencia won't be Placiencia anymore if mass tourismus comes there."

Opening a cruise port in Placencia can be good and bad.  On the plus side, the town gets worldwide exposure, additional revenue from tourists into the local economy and more home buyers from those looking for a vacation home.  On the down side, critics argue cruise ships simply bring day-trippers who don’t spend money and leave environmental damage in their wake.

There is also a report that this plan for Placencia is merely a negotiating tactic by Royal Caribbean to try to get a better deal.  Royal Caribbean is reportedly in a dispute over plans to build a second terminal in Belize City.

Cruises generate over $1 million for a city

Royal Caribbean's Australasia managing director Gavin Smith says that a typical Royal Caribbean cruise that stops in Auckland, New Zealand can put $1.26 million into the local economy.  Royal Caribbean expects 6000 visitors to New Zealand in the 2010/11 season, rising to 36,000 in 2011/12 . Americans and Europeans made up about 70 per cent of guests.

Royal Caribbean's sister company Celebrity Cruises will have their 1800-passenger ship the Celebrity Century start or finish cruises out of Auckland from October 2011.

According to Smith, a full cruise ship helps create jobs in coaches, taxis, baggage handlers, customs and border control agencies that attended the pier and engagement with the airport and local hotels.

"We have local fresh produce provedoring requirements, we have fuel needs and we also have stevedoring needs because we'll do a full store in Auckland, in terms of container movements and the more industrial side of the business. The general figure that the cruise lines use is around a million dollars into the local economy on a turnaround day. And then you've got the additional upside of most of the Americans and Europeans and Australians that are getting on and off the ship will be buying one, two or three nights [accommodation] pre- or post cruise."

Smith also added that cruisers were more likely to spend money in the city on hotel stays because it was the place they would begin or end their cruise.

This number is down 12.8 percent from the year before, but the CLIA  is seeing positive signs this year as the economy recovers such as net capacity (available bed days) among CLIA members in 2009 rose 3.8 percent, and average capacity utilization was 104.6 percent for the year.

The report also mentioned that total gross revenue declined by 11.4 percent.  The cruising industry supported 313,998 jobs that paid a total of $14.23 billion in wages and salaries. Direct cruise spending was $17.5 billion.

CLIA President and CEO Terry Dale said, “We are encouraged that the current economic climate is showing signs of improvement and cruise lines have been reporting strong activity thus far in 2010.”

South Florida remains the epicenter of the cruise industry, with the Port of Miami and Port Everglades ranking as the world's top cruise ports.  U.S. ports embarked 8.9 million passengers and accounted for nearly 66 percent of the worldwide total, based on figures for CLIA's membership, which includes the vast majority of cruise lines.

Photo of the Day: Mariner of the Seas leaving Cabo San Lucas

In:
Mariner of the Seas Photo of the Day Cabo San Lucas 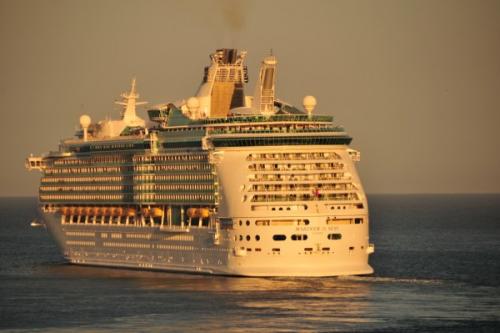 Examiner.com writer Chris Owen wrote a blog entry about his top seven things he loves about Royal Caribbean and as a fellow Royal Caribbean fan, it's a great read. His top list includes..

No doubt about it, while other lines have different classes of ships, no other fleet has the diversity between classes that Royal Caribbean does. Ranging from 73, 000 ton Monarch of the Seas to 154,000 ton Oasis of the Seas, their different classes of ships offer unique experiences. Common elements among the ships though like signature restaurants and familiar features make sailing any of the ships feel like a trip back home after the first time.

Certainly some people may not get why some people (like us) love cruising with Royal Caribbean and this is a good explanation of why we like them so much.

Royal Caribbean is looking to get more people to consider a cruise vacation as a way of celebrating the holidays this year, from from Thanksgiving to New Year’s Day, aboard its cruise ships. 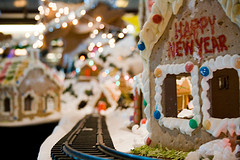 For those considering Thanksgiving, Royal Caribbean ships will feature a gourmet turkey dinner of course as well as the award-winning Adventure Ocean program, which will provide kids with themed activities including Thanksgiving story time and arts and crafts.

If you're considering December, Royal Caribbean will offer Hanukkah-themed festivities lasting all eight days of the holiday, including a Rabbi aboard every ship to conduct a nightly menorah lighting ceremony and services. For those celebrating Christmas, a Catholic priest also will be aboard to lead the holiday’s observances including a midnight mass on Christmas Eve.

Or if New Years is when you'd like to be on a Royal Caribbean ship, there are special ways to ring in the new year such as the Captain’s Countdown and themed parties in every onboard lounge. Young cruisers will enjoy the extended late night party zone where kids and teens will be celebrating at their own New Year’s festivities.

Royal Caribbean senior vice president of Marketing Betsy O’Rourke thinks a cruise is the perfect way to celebrate family holidays, "There is really no better holiday value than spending your’s aboard a Royal Caribbean cruise with family and friends. All too often, people get stressed out with holiday preparation and entertaining. Royal Caribbean takes care of all this work, providing guests the opportunity to relax and truly enjoy the holiday season with their loved ones. Additionally, the Diamond Celebration in December will offer exclusive benefits and programs to our Diamond-status Crown & Anchor Society members to recognize our most loyal guests"

The Department of Tourism in the Cayman Island is concerned after news that cruise ship calls to Grand Cayman will be cut by twenty five percent next year.  In response to the news, the Department of Tourism has announced plans for an enhanced experience at the port, which will be  based on responses from a survey conducted among visiting passengers earlier this year.

In addition, tourism officials are going ahead with a plan to improve service delivery as well as the port’s physical environment. This six month project will take the rest of the year and is a joint venture between the Department of Tourism, the Port Authority of the Cayman Islands and the Cayman Cruise Industry Partners.

With the reduction of calls to Cayman next year by cruise lines there were concerns that problems with visitor experience had been instrumental in the cruise lines’ decision to drop Grand Cayman. CNS has contacted both Royal Caribbean and Carnival to ask them why they are reducing calls to the Cayman Islands and is still awaiting a response.

Local businesses seem most concerned with the conditions at the George Town port and the Spotts terminals.  Their primary concern is the need to begin work on the cruise berthing facilities.

Australia to host 2010 Cruise Down Under conference

The growth of cruising as a tourism sector will be discussed at the 2010 Cruise Down Under conference in Brisbane next week, Tourism Minister Peter Lawlor said today.

Mr Lawlor said Australia continued to welcome an increasing number of cruise ship passengers to its shores; with passenger numbers growing by more than 30 percent in 2008 – 2009, compared with the previous year.
“The 14th annual Cruise Down Under conference, sponsored by Tourism Queensland, Portside Wharf and Brisbane Marketing will bring together more than 100 delegates from across the Asia Pacific region,” Mr Lawlor said.
“The conference is the premier cruise shipping event for tourism and cruise officials to gather and discuss the state of the industry, international port comparisons and the sustainability of the industry.
“The theme of this year’s conference is ‘Rise to the Challenge’ and keynote speakers include top international and domestic cruise executives.
“Attendees will gain insights from leading representatives from Princess Cruises, Royal Caribbean Cruises/Royal Celebrity Tours and Aurora Expeditions, into the challenges for the industry and the growth opportunities into the future.”
Mr Lawlor said Tourism Queensland had increased its focus on the cruise industry in response to the continuous growth the cruise market experienced in recent years.
“Between 2008 and 2009 Queensland’s cruise shipping industry generated more than $203 million in related expenditure - an increase of more than $52 million on the previous year - and supported more than 1000 full time jobs,” he said.
“Furthermore almost 248,000 passengers visited Queensland ports during the same year, an increase of more than 78,500 compared with 2007-08.”
Cruise shipping has been identified as a priority market development opportunity for Queensland. Supporting the industry’s growth and protecting tourism jobs are key actions of the Bligh Government’s Tourism Action Plan to 2012.
Comments

Port Canaveral, Florida officials released on Wednesday a healthy 2011 year budget proposal that's nearly 22 percent bigger than the 2010 plan. Thanks to expected larger-capacity cruise ships, such as Freedom of the Seas as well as cargo shipping, revenues from those two sectors are forecast to increase more than 23 percent, from the current $39 million to $48 million in 2011. 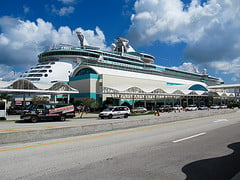 Port officials will vote on the 2011 budget plan in September and Port Canaveral's chief executive officer expects an even better budget picture in 2012.

Port Canaveral has been raking in the money despite other municipalities seek ways to shore up budget gaps. How does Port Canaveral do it? The port's revenues come mostly through lease arrangements with tenants, ship tariffs and other business dealings.

"It's amazing how well these numbers look," said Tom Goodson, chairman of the port commission, "because the real world is nothing like this."

Photo of the Day: Liberty of the Seas pool

In:
Liberty of the Seas Photo of the Day 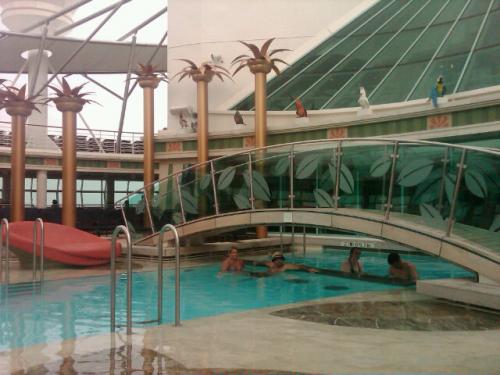