Royal Caribbean profits up in Italy

Gianni Rotondo, Royal Caribbean's general manager in Italy is happy with the recent numbers the cruise line has seen in the country. 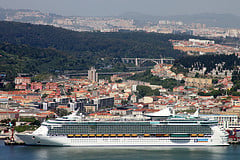 "The January-March quarter saw an increase in passengers by 20%, with an 8% increase in average revenue, "says Rotondo, noting an increase in price as a customer's propensity to choose the more expensive cabins.

While still in winter, Royal Caribbean Italy is already looking ahead to the summer season and has launched a new promotion called "Room with a discount", which returns after a good showing last year.