Royal Caribbean formally announced their balcony smoking ban in an email that was sent to its past guests detailing the decision.  The statement confirmed the details we had previously reported last week and states the ban goes into effect for all sailings departing on or after January 1, 2014.

Royal Caribbean confirmed smoking in all indoor locations will be prohibited, with  the exception of the Casino and the Connoisseur Club on Freedom and Voyager Class ships and one designated smoking venue on ships sailing from Chinese homeports. In the Casino, there will be designated smoking and non-smoking areas.

Outdoor smoking areas will be designated on the starboard side of all ships; with the exception of Oasis-class ships that will allow smoking on the port side of the ships.

Indoor smoking areas permit tobacco cigarettes and electronic cigarettes. Cigars and pipe tobacco can be enjoyed in designated outdoor areas, or in the cigar club on the ships that offer this venue. 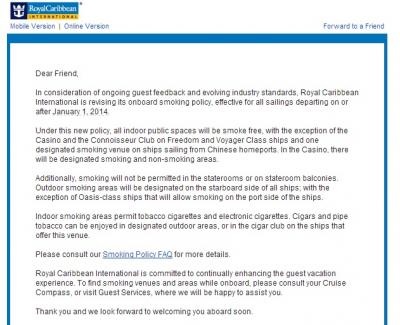