Investment for second phase of Honduras port of Roatan received

The port of Roatan in Honduras, whose major shareholder is Royal Caribbean Cruise Lines, announced a new investment of $45 million for work on the second phase of its Town Center, as an extension of existing facilities at the destination of Islands Bay, on the Caribbean coast of this country. 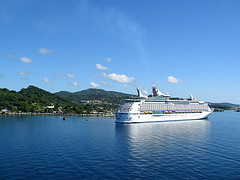 According to El Heraldo de Honduras, the additional investment provides a new and wonderful atmosphere of entertainment and offers first-class commercial facilities to accommodate more and more cruise passengers who will be visiting Roatan.  Currently, Roatan covers 6% of the market share of Caribbean and this year is about 800,000 cruise passengers. The Roatan cruise industry generated about $ 50 million in foreign exchange in 2009 and should amount to roughly $ 80 million in 2010, according to estimates by the authorities.

According to a study by the Cruise Association of Florida and the Caribbean, Honduras is in fifth place in the ranking of 29 cruise destinations in the world.